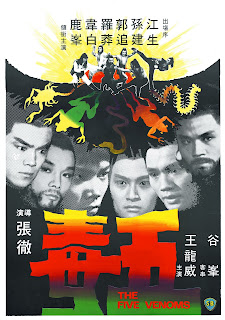 Many martial arts films have little to no plot, and what there is of it is to get from one fight scene to another.  Then again, there are a number that seem filled to the rim with plot, so much that one starts wondering what happened to all the fighting.  It also leads one to wonder if any official in China's 5000 plus year history has ever not been corrupt, as this seems to figure immensely when it is decided that a movie needs a little bit more than kicks and punches.
Yang Tieh (Sheng Chang), the last student of the Five Venoms House, is given a task by his dying master (Dick Wei).  The school has become infamous for turning out students that do evil, and the master believes in the treasures belonging to the school are recovered and donated to charity then it may undo the bad they have done.  The problem is the other students are still out there, each under assumed names, and each having different abilities: gecko, toad, snake, centipede and scorpion.  The map to the treasure was left with a colleague of the master, also living under an assumed identity, and Yang Tieh must find him before the others do.
In addition to the treasure he is to find the other students and eliminate the evil ones.  Unfortunately, good as his skills are, he is nowhere near as skilled as the others, and will need the surviving students who have not turned to evil to assist him.  His search begins in an unnamed city, and he soon makes friends with a police officer named He Yuanxin (Phillip Chung-Fung Kwok).  By chance the old man guarding the treasure happens to be in the city - but unfortunately everyone else, good and bad, is as well.  When a murder occurs and appears to be related He must track down the perpetrators, and Yang Tieh is right on his trail.
Five Deadly Venoms has a great set-up, a classic director in Chang Cheh and the usual colorful set design expected of the Shaw Brothers studio.  It also has a ton of political infighting and intrigue, much of it involving a corrupt judge (Lung-Wei Wang) in the pocket of Snake (Pai Wei).  While most of the blood is the bright red stuff used for movies during this time period, the sequence with the needles and a heated piece of armor are excruciating to watch, and the makeup is a bit more realistic than would be expected.
Happily this is available with the original Cantonese soundtrack, so I can say that everyone does a good job with the acting, and there are even some admirable character turns.  Unfortunately, since it is all filmed on a soundstage, it comes across as feeling like older Hollywood films, and definitely has the feeling of a stage play in many places.  This is accentuated by the fact that, though the fight are worth waiting for, it is the political drama that takes center stage.  This also comes at the expense of our main character, Yang Tieh, who is absent for a good chunk of the movie while this all plays out.
This is considered one of the essential films of this genre, and one of the best Shaw Brothers films.  Still, I wish there was a bit more action.  The beginning scenes promise so much, and we do get to see everyone in action at some point, but not to the level one would hope for.  It is one of those movies where there is a lot more talking about fighting than there is actual fighting.  Still, if one goes into it expecting a well-made historical costume drama with a bit of action on the side, then this is definitely worth a look.
Five Deadly Venoms (1978)
Time: 101 minutes
Starring: Sheng Chiang, Phillip Chung-Fung Kwok, Chien Sun, Meng Lo, Pai Wei, Meng Lu
Director: Cheh Chang