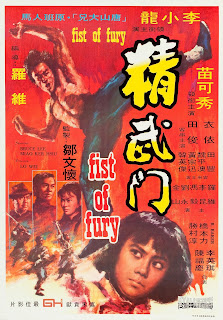 Bruce Lee is arguably one of the most recognizable martial arts film stars though his career was rather short.  His most well-known movie is arguably the last one he completed before his death, Enter the Dragon, even if a number of films tried to cash in on his fame afterward.  That includes the movie he was making at the time he passed away, Game of Death, as well as quite a few that used archive footage or even bootleg footage of his funeral.
Before Enter the Dragon, but after television roles, were two Hong Kong films directed by Wei Lo: The Big Boss and this one, First of Fury.  Also called The Chinese Connection, Fist of Fury was an extremely low budget production, but still managed to  help Lee establish himself as an international star.  It would also lead him to direct his own movie, The Way of the Dragon, after being upset with numerous script and and directorial choices in this one.
Chen Zhen (Lee) returns to his martial arts school in Shanghai upon learning of the death of his teacher.  He has also returned after some time away to ask Yuan Le-erh (Nora Miao), one of his fellow students, to marry him.  However, during a memorial for their teacher, two Japanese students led by an interpreter named Wu (Ping-Ou Wei) arrive at the school, mocking them and challenging them.  The students hold back, fearing reprisals from the occupying Japanese, but Chen decides that the insult was too much and goes to the rival school, attacking a number of their people.
The attacks and reprisals escalate as Chen goes into hiding and begins to plan his revenge against Suzuki (Chikara Hashimoto), the leader of the Japanese school.  Meanwhile, both a Shanghai inspector (Wei Lo) and the Japanese are looking to arrest Chen as the situation becomes deadly.
One of the things Lee objected to was the racial element of making the Japanese into two-dimensional bad guys.  It takes place during the occupation (although people can be seen occasionally in 1970s fashions and modern automobiles off in the distance) and Lee himself was afraid of insulting his Japanese fans.  Despite this fact the movie still became quite popular there as well.
While it is quite a fun movie to watch I can see why Lee was eager to break from doing films like this.  There are a number of scenes that have him performing feats that are more funny than dramatic, such as twirling two assailants (obviously replaced by dummies for the scene) in a circle or lifting a rickshaw.  Despite his reservations, and his dissatisfaction with Wei Lo's direction, Chen Zhen became a popular figure in Hong Kong cinema.  Wei Lo himself even directed the kind-of sequel, New Fist of Fury, starring Jackie Chan, who appeared briefly in this film and doubled for Chikara Hashimoto in one of the major stunts toward the end of the film.
It is really difficult for me to say anything beyond enjoying the acting and the general cheesiness of it all.  I can see where a lot of parodies of kung fu movies got their ideas after seeing this.  I really can't judge anyone's acting as everyone is dubbed, including Robert Baker, who plays a giant Russian martial artist that is the penultimate challenge before Chen takes on Suzuki.  Just expect a lot more action and a lot less of a personal project from Lee when watching this.
Fist of Fury (1972)
Time: 107 minutes
Starring: Bruce Lee, Chikara Hashimoto, Robert Baker, Nora Miao
Director: Wei Lo