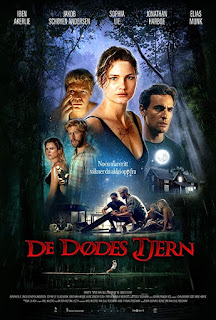 Lake of Death, or De Dødes Tjern, was a 1958 Norwegian horror film written and directed by Kåre Bergstrøm.  The movie dealt with friends visiting a remote lake in the Norwegian forest where a ghostly screams were rumored be heard.  It is a classic of Norwegian cinema.  Unfortunately, this kind-of remake only goes to show that Hollywood is not the only place spitting out unnecessary remakes.
It is unfortunate since director Nini Bull Robsahm, who also wrote this version "inspired" by the original, is handed a nice creepy tale and obviously has the skill to film the Norwegian countryside in a way that is quite loving.  Unfortunately the group of young actors involved are ill-equipped to bring the stale script to any kind of life.
Lillian (Iben Akerlie) returns to the family cabin a year after the death of her brother Bjørn (Patrick Walshe McBride) mysteriously went missing.  She is planning to sell the home and, at the urging of her ex-boyfriend Gabriel (Jonathan Harboe) has returned for closure.  In tow with them is her friend Sonja (Sophia Lie), her boyfriend Harald (Elias Munk) and Bernhard (Jakob Schøyen Andersen), who does a paranormal podcast.  Also along is another ex of Lillian's named Kai (Ulrich von der Esch) who provides the means to get back and forth from the cabin.
Mysterious things begin to happen as soon as they arrive made worse by Lillian's tendency to sleepwalk.  As the events progress the group begins to turn against each other, especially as disappearances and deaths begin to happen.  Eventually Lillian must face what has been waiting in the cabin for her all this time.
When I say the script is stale, I mean every single jump scare (including loud, discordant chords to go along with it) one would have in a by-the-numbers horror production, the "reality bending scenes" and one of the things that has begun to irritate me to no end recently: strange things suddenly dashing in front of the camera when someone's back is turned.  This happens at least twice in this film, and neither time with any satisfactory resolution.
That could be the continuing theme for rest of the movie.  Lillian is plagued by visions of black goo in the lake water, but it is never explained why.  For the rest of the characters things just happen but, again, for no good reason.  It's as if Robsahm really loved the original movie, wanted to make it and with her own ideas, and realized too late she didn't have any.  A straight remake would have been much better.  It doesn't help that Iben Akerlie's performance makes Kristen Stewart look emotive.
The temptation is there to sometimes try out a movie because it allows one to view another country's cinema.  The sad truth is there is just as much garbage made in other countries as there is here, it's just that until recently it took an effort to find the worst - or even just the mediocre.  While not the worst (at least that would have been fun to watch), this is simply a dull, and poor, attempt at a horror film that is no better than the stuff Blumhouse cranks out on the regular.
Lake of Death (2019)
Time: 94 minutes
Starring: Iben Akerlie, Patrick Walshe McBride, Ulrich von der Esch, Elias Munk, Jakob Schøyen Andersen, Jonathan Harboe, Sophia Lie
Director: Nini Bull Robsahm