Jet Li became a huge international star in the 1990s, largely due to the Once Upon a Time in China series.  But, like many of his contemporaries in Hong Kong cinema, he started off with the Shaw Brothers.  He had been studying martial arts since he was a child so it's not a surprise that the studio decided to give him a starring vehicle early on.  It's also not a surprise that the studio decided to throw a sizeable budget at the film as well.
Martial Arts of Shaolin gathered more than 300 martial artists from around China to participate in the movie and it is rather a beautiful spectacle.  Jet Li does what he does, Chenghui Yu makes a good villain and there is plenty of wonderfully choreographed fighting among some of the most beautiful landscape on Earth.  It definitely has everything needed for a movie to showcase the studio's new young rising star.  Everything, that is, except a little more than the merest hint of a plot.
Zhi Ming (Li) is a monk at the Northern Shaolin Temple.  He is quite content in his studies and often pushes himself to the limit.  However, when he hears of a birthday party for He Sao (Yu), a once disgraced magistrate returning to a court position, even his vows can't keep him at the temple.  He Sao was responsible for the death of Zhi Ming's parents and, though a monk, he has sworn revenge.  It turns out, though, that he is not the only one; Sima Yan (Qiuyan Wang) has sworn the same vow, and her friend Chao Wei (Jianqiang Hu) has been sent to stop her.
Both assassination attempts fail, but that allows the three, after ironing out some differences, to work together.  Though Zhi Ming is supposed to be doing penance for leaving the temple without permission, he sneaks off once again, this time to help Sima Yan keep her vow.
Before it truly gets to to the assassination attempt there is a lot of time spent at the temple showing Zhi Ming's training.  Throughout not a word is spoken about any revenge plot on his behalf until his students bring up the birthday party and then it's off to the big city to suddenly do some killing.  Even then there is a good part of He Sao's birthday celebration to get through before Sima Yan makes her move, and by then Zhi Ming's chance is largely gone.  What it does lead to is an exciting escape from the city, which is a precursor to the wonderful battle at the end on He Sao's boat and on a squash farm.  These scenes are worth it, but there is so little of the actual revenge plot, or what revolves around it, that most of the time is spent with comic relief.
Certainly some of it is funny - Jet Li in drag is kind of amusing - but then a lot of it is screwball and slapstick humor, so enjoyment of that will determine how funny one finds most of the film.  Another big problem is, unlike a number of Shaw Brothers reissues from Celestial, this only comes in the English dub.  But, considering how silly most of the movie is, that doesn't detract as much as it would if this were something a lot more serious.
While quite a bit of fun, and it is enjoyable to see Jet Li in one of his earliest starring roles, he has made so many better movies than this and so did the studio.
Martial Arts of Shaolin (1986)
Time: 94 minutes
Starring: Jet Li, Jianqiang Hu, Qiuyan Huang, Chenghui Yu
Director: Chia-Liang Liu 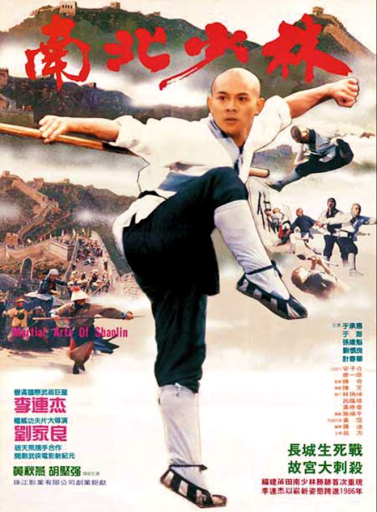