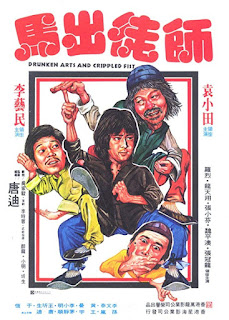 Not every kung fu film has to have the most serious plot.  In fact, it could be said that in a good many of them there's really not much plot at all.  Even some of the best, like Enter the Dragon, are set up to just have a reason to get to the fighting.
In 1978 a major new star hit the screen in Hong Kong.  He had been around, playing bit parts and doing stunt work, but Jackie Chan finally got his own movie: Drunken Master.  It turned out to be a classic itself, combining comedy and action and, surprisingly, a pretty decent plot to keep things going.  And, in any film industry, if something is done right then everyone else will try to copy it.
Drunken Arts and Crippled Fist is obviously more than a little inspired by Drunken Master, but largely does away with anything other than a series of set pieces to do some comedic martial arts.  Hsiao Hu (Yi-Min Li) is sent by his father as a child to a kung fu master (Siu-Ten Yuen) to learn the arts so that he can take over as a kung fu expert at the local school.  His father's motive, rather than honor or anything else too complicated, is simply the fact that he wants someone in the position he won't have to pay.
He's rather upset when it turns out Hsiao Hu obeys his master quite literally and refuses to fight the local teacher because he has been told, as an "expert", that he should not fight.  This begins a number of comic adventures as he roams the countryside, claiming to be a kung fu expert, after being kicked out by his miserly dad.  It doesn't matter, because his ability to dodge a hit or kick helps him quite a bit, and he soon teams up with a thief named Hsiao Yen (Hsiao-Fen Chang), who is also quite proficient.  After a number of encounters they are bested by Chow Tao Hai (Tien-Hsiang Lung), a former pupil of Hsiao Hu's master.  Chastened, Hsiao Hu returns to learn a secret technique so he can truly call himself an expert.
Nothing really too violent happens here - it's all good fun, after all - and most of the comedy comes from putting a would-be master named Lu (Ping-Ou Wei) and his two followers in their place repeatedly.  There is also decent choreography, although in some places it is obvious that the blows are a mile off from landing.  Still, for a movie with practically no budget, there is still a decent final battle as well as Hsiao Su taking on three spearmen.  In fact, this is so trimmed down there is little time when there is nothing happening or just dialogue, but regardless there is still decent chemistry between the leads.
Siu-Ten Yuen had played similar rolls in films previously but, unfortunately, this is one (if not the) last of his appearances.  It's really hard to tell performance-wise how anyone is doing since I only saw this in the English dub, but it appears that everyone was having a good time, and it was hilarious listening to the dubbing on the Ironhead character as some American tried to do a fake Cockney accent.  If the movie was meant to be serious at all I would have been upset, but it goes along with the general sense of fun.  This movie is far from essential viewing, but it is worth the time to just to sit back and enjoy some great comedy and great fighting.
Drunken Arts and Crippled Fist (1979)
Time: 80 minutes
Starring: Yi-Min Li, Siu-Ten Yuen, Hsiao-Fen Chang, Ten-Hsiang Lung, Ping-Ou Wei
Director: Ti Tang