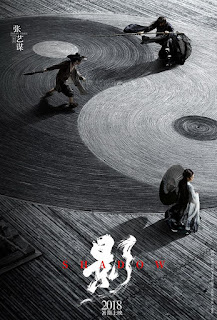 It has been awhile since I've seen a Zhang Yimou film.  In fact, going into Shadow, I wasn't really thinking anything other than it sounded like an interesting wuxia film.  As it unfolds it shows that he has not lost any of the touch he had in Hero or The House of Flying Daggers.  The obsession with calligraphy pretty much sealed it.
Truth is, because of foreign film classes I took long before Zhang began to get larger budgets to do his martial arts epics, I still associate him and Gong Li, who was featured in many of his early films.  He was one of the first mainland Chinese directors to start getting a lot of attention in the United States, and he always seemed to be walking a fine line early on in not trying to anger the authorities he was dependent on for whatever funding he could get.  The Chinese movie industry has changed a bit, but I always get the feeling that he still kind of walks that line - certain scenes and plot lines can be interpreted as either critiques of capitalism or his own government, but its never blatant enough to get him in trouble or make him appear like he's doing propaganda.  Perhaps the fact that few of his films, even his early ones, took place in modern-day China helps - although he seemed to take more chances with One Second, the movie that followed this.
Here we are back in period drama mode with a story based loosely on the Three Kingdoms period of Chinese history.  The King of the kingdom of Pei (Ryan Zheng) is upset to find that his Commander (Chao Deng) has disturbed the peace between him and the Yang kingdom.  The Commander has nursed a goal for years to retake Jing City, a strategic walled stronghold that used to belong to Pei.  The King has sought to keep the peace, but the Commander has agreed to a duel with Yang Can (Jun Hu), who fights with a legendary blade that is known for inflicting a fatality on its opponent in three rounds.
To keep the peace the King decides to offer his sister (Xiaotong Guan) in marriage to Yang's son (Lei Wu).  The offer is rebuked in an insulting manner, so the King begins to play the long game - stripping the Commander, and the second in command, of their ranks, knowing they will do as they will.  What the king does not know is that what he thinks is the Commander is a slave boy trained by the real Commander to exact his revenge.
One thing that is immediately noticeable about Shadow is its production design.  It is a color film, but sets are largely black and white as are the costumes.  The tai chi symbol, representing the yin and yang, is the influence, as is ancient ink art.  Much of the background, rather than being digital, is matte paintings in traditional Chinese styles.  It does give the movie a unique look, as does the constant rain (which is an essential part of the plot), but it also makes it look quite a bit like older films that came across as filmed stage plays rather than movies.  The action scenes are the exception to this, featuring crossbows and bladed umbrellas against archers and soldiers carrying guandaos, sword-like blades mounted on long poles.  The dual at the heart of the story is definitely well-done.
Before the fighting gets started there are a lot of court politics to get through to set up the story.  This is where it looks most like a stage play, or like a reenactment from an older History Channel documentary.  Luckily Chao Deng is up to the task of his dual role as the Commander and his Shadow, Ryan Zheng plays a king who is craftier than he appears and, surprisingly, both Li Sun as the Commander's wife and Xiaotong Guan as the king's sister are integral to the plot.
I'm sure someone who knows Chinese history would pick this apart piece by piece, but in addition to being loosely based on a period of ancient Chinese history it is also based even more loosely on a set of novels from the period.  It doesn't provide specific dates (the Three Kingdoms period itself was during the third century C.E.), so it's easier to accept this as pure fantasy rather than an historical drama.  At least it's not a stab at international success like The Great Wall.  It is successful as both a beautiful piece of art as well as a fantasy action film despite the staginess, so it is nice to see Zhang Yimou returning to form.
Shadow (2018)
Time: 116 minutes
Starring: Chao Deng, Li Sun, Ryan Zheng, Xiaotung Guan, Jun Hu
Director: Zhang Yimou