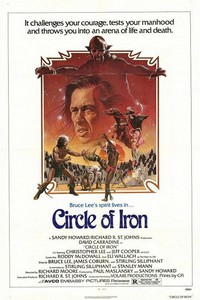 In the 1960s Bruce Lee was on the cusp of stardom.  Unfortunately, he had been working in the United States and trying to break into Hollywood which at the time was finally willing to break certain racial barriers.  In typical Hollywood form, that meant one particular race, and Mr. Lee didn't count.  Still, he persevered.

Circle of Iron was conceived as not just a martial arts film, but one that explored the philosophy of martial arts.  It had plenty of action and adventure, but ultimately had a lesson at its heart.  Lee wrote early drafts of the script, hoping to have Steve McQueen star in the lead.  McQueen was not willing to make Lee a star on his coattails, so James Coburn was the next choice.  Typical Hollywood situation arose, the script ended up in development hell, and the movie never surfaced.  By the time Lee had the influence to revive it and make it happen he had passed away.

I didn't know this about the movie when I started watching it, so when I started seeing actors like David Carradine and Eli Wallach show up in the credits of what was supposed to be a martial arts film, I was getting nervous.  The last thing I wanted to watch was a bunch of white actors doing yellowface.  Instead, it was Carradine funding it (and playing the roles that Lee originally intended to play) and some scriptwriters finishing it out.  It may not exactly be what Lee intended, but it is still rather successful in its execution and largely contains the lessons he intended.

Cord (Jeff Cooper) is a self-taught fighter without the style or grace of others he is challenging in a competition held by White Robe (Roddy McDowall) to determine who will go on a quest to retrieve a book rumored to hold infinite wisdom.  There are challenges along the way, and the book itself is supposed to be guarded by an expert fighter named Zetan.

Cord's arrogance and lack of grace loses him the challenge, but he decides to accompany the winner, Morthond (Anthony De Longis), whether Morthond likes it or not.  While on the journey Cord meets a blind man who fights with a long flute (Carradine), the music of which only Cord can hear.  After seeing the blind man fight off a number of challengers, he decides that in order to defeat Zetan he must become the blind man's student.  The latter is in no mood to teach, and disappears, shortly before Morthond returns.  Mortally wounded, it appears he quickly lost the first challenge.

The challenge itself is with the Monkeyman (Carradine) who disguises himself as as such and commands a cult of half-simians.  With the few lessons that he has learned, Cord defeats the Monkeyman, and is given the clues to his next challenge.  This leads him to Changsha (Carradine), a nomad with a particular dancing style of fighting that tempts Cord, who has taken a vow of celibacy, with his wife Tara (Erica Creer).  Cord gives in, only to wake up the next morning to find the camp abandoned and Tara crucified.

He once again begins to wander, meeting again with the blind man, who gives him specific instructions for following him - which Cord, of course, fails to do.  The path though, leads him back to Changsha, but by this point, and after an encounter with Death (Carradine), he is finally learning the lessons he is supposed to.  His fight with Changsha, being a test of skill rather than of revenge, reveals him to be worthy to face Zetan (Christopher Lee) and discover what knowledge the book holds.

Much has been made about the clumsy fighting of Jeff Cooper in this movie, but if you consider who Bruce Lee wanted to star originally, it fits.  Neither Steve McQueen nor James Coburn were known for graceful martial arts moves, but rather as two-fisted brawlers.  The point is that a man like Cord, who depends more on brute force and confidence than he does on style and form, can achieve the same wisdom as one who follows the more elegant path.

David Carradine, despite himself not having much more training at this period in his career, acquits himself well.  It is his acting performance as the blind warrior that stands out rather than any of his actual fighting, although he gets to show off his dancing techniques in the characters of Death and Changsha.  Still, it would have been nice if Lee had survived to play the roles.

Which brings up another point.  The movie is not supposed to take place in Asia, but rather in a made-up world.  The choice to film in Israel, separating the action from both Hollywood (although some fight scenes were re-filmed there) and Hong Kong and partially erasing the whitewashing arguments.  In fact, this was never supposed to be a film filled with Asian actors.  The supporting roles, especially as the blind warrior, would have meant Lee getting notice and opening the door for other Asian and Asian-American stars getting major roles.

Taking the movie as it is, and despite the fact that Jeff Cooper is quite a bland lead and Roddy McDowall and Christopher Lee are relegated to cameo roles (and the fact that Eli Wallach provides one of the best scenes in the movie), Circle of Iron is still does the job of finally bringing this movie to an audience.  It is a better tribute to Lee than the hundreds of rip-off films (largely made in Hong Kong) that profited off of his name and death.  Still, it is hard to watch it without wondering what could have been.