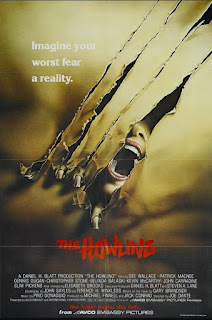 Every decade or so the classic monsters get a redo.  Our favorite Transylvanian vampire has gone from the rat-like "Count Orlock" of Nosferatu to the suave specter of Dracula, and then transformed into an almost feral presence in the Hammer versions before becoming tragic figure in the 1970s and 1990s.  All along the effect have become better, evolving from a couple of puncture wounds to entire throats ripped out.

Hammer didn't do too much with werewolves, and though Lon Chaney, Jr. played Larry Talbot as a tragic character in The Wolf Man and all the sequels it generated, the character came later in the Universal pantheon and it seemed that, for quite a while, no one had any use for lycanthropes.  That is, until the early 1980s.

1981 saw a pair of werewolf films.  The more famous, An American Werewolf in London, was directed by John Landis and had special effects by Rick Baker.  It told the story of an man turned into a werewolf when attacked on the Scottish moors, and it did it with a dark sense of humor, largely in the choice of songs on the soundtrack and a rotting corpse showing up to give advice.  The other film, The Howling, did not get the budget of John Landis's film, but was filled with visual puns just as the other was filled with audio ones.  And, again, Rick Baker was doing the effects - that is, until he went off to do An American Werewolf in London.  That left the job to Rob Bottin, and both movies revolutionized the werewolf transformation in ways unimaginable 40 years prior.

Bill tags along with her, and at first the colony seems welcoming, but Karen is none too happy with the sound of wolves at night nor the attention that Marsha (Elisabeth Brooks), a supposed nymphomaniac, is giving her husband.  Back in Los Angeles her colleagues Terry (Belinda Balaski) and Chris (Dennis Dugan) begin researching werewolves after it appears that, not only is Eddie's body missing, but it looks like he clawed his way out of his drawer at the morgue.  Terry, Chris and Karen soon realize that there is more to the Colony than just pop psychology.

The Howling is based on a novel by Gary Brandner, but Joe Dante didn't like the book nor Terence Winkless's screenplay too much, so he hired John Sayles, with whom he had worked with on Piranha, to do the screenplay.  What Sayles came up with is a typical slow-burn thriller - it is not until the last third that we start truly seeing any werewolves - that still keeps things nice and tight.  The early scenes at the Colony, meant to buildup some suspense, may be a bit slow, but ultimately pay off.

This movie did not have the budget of An American Werewolf in London, but Rob Bottin still did a wonderful job with makeup, placing air bladders under the prosthetics to make it appear as if the skin was boiling during the transformation.  His use of stop motion on some of the creatures was effective as well.  It's amazing that the ending was as effective as it was, since the final transformation had to be done at Joe Dante's house, with the film literally having run out of funds.

Dee Wallace does a fine job as always, but Christopher Stone seems there just to play a tough guy and nothing else.  There is not a lot of chemistry between the two, but that may be what Dante and Sayles wanted, as the marriage seems on the rocks from the start.  Belinda Balaski and Dennis Dugan, on the other hand, are fun to watch, as are some delightful bit parts from Dick Miller as an occult bookstore owner and Slim Pickens as a rural sheriff.

If Robert Picardo's name sounds familiar, it was because he famously played the Doctor on Star Trek: Voyager and Richard Woolsey on Stargate SG-1.  This was his first movie role, and it is hard to recognize him, both because he is so young and due to the fact he is encased in makeup.  Nevertheless, Eddie would be a scary presence, lycanthrope or not.  Also memorable is Elisabeth Brooks, who was none too pleased that there was a lot more of her shown in the movie than she had believed would be.

The '80s were known for two different types of horror: slasher films and effects-heavy gorefests that seemed more interested in surprising the viewer, and sometimes making them feel uncomfortable, rather than just scaring them.  The latter has its roots in The Howling and An American Werewolf in London, and I would suggest watching both as companion pieces to see how creative, and innovative, these movies were becoming at the time.