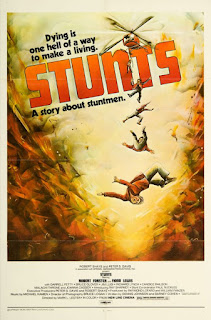 Before computers did practically everything for even the laziest of film makers, stuntmen and special effects artists were the kings.  One of the reasons to look forward to James Bond films over the years is to see what daring stunt the makers of the movie would come up with next, and some of their ideas definitely added life even to the worst of the films.  Jackie Chan and, recently, Tom Cruise have both built a reputation doing things that normally are left to professionals that, while they enjoy the thrill of doing something new on screen, often value safety above all else.

It's not surprising that the 1970s saw an entire side genre of "stuntsploitation" films.  I do remember several that were largely just strings of stunts put together with spoken narration.  Some, like Stunt Rock or Gone in 60 Seconds, used a thin story to string them together, while others gave us full-on movies about those who worked in the profession.  Stunts is largely the latter, although it does use its narrative as an excuse to string together a number of set pieces.

When Greg Wilson (Gary Davis) falls to his death during a rather complicated stunt on the scene of a movie shoot in San Luis Obispo, his brother Glen (Robert Forster) leaves the movie he is working on to fill in for him.  Since his brother and he had worked on that stunt for years, and there was little that could go wrong if all the equipment was in order, he becomes concerned that the death may not have been an accident.  Along the way he meets B. J. Parswell (Fiona Lewis), a journalist doing a story on his profession, who begins to have suspicions of her own when the other stuntmen on the crew start suffering similar accidents.  This results in Glen and B.J. playing amateur detective to find out who is behind the deaths.

That is about all there is to it.  There is some drama with the producer's wife (Candice Rialson), who happens to be the lead actress, getting with everyone on the crew and a budding romance between Glen and B.J.  Most importantly, there are a number of stunts, involving cars, helicopters, falls, burning buildings - the usual, and we get to see some of the methods they use to make them happen.  The only flaw here is that the audience doesn't see real stuntmen as much as would be desired.  They are all actors, which can be a good thing;  I have occasionally seen the stuntmen try to act.  It works sometimes, but it's often like when musicians try to act in their videos: you realize why they took up the profession they did.

For as little bit of story as there is, the ensemble cast of Ray Sharkey, Joanna Cassidy and Bruce Glover filling out the rest of the stunt crew all manage some screen time in order to get to know them better, which helps bring some emotional heft when the main plot gets rolling.  One of the most memorable performances is Richard Lynch as the movie's beleaguered special effects designer, who can't believe people are dying left and right on set pieces that he made sure were safe.

None of the acting is really too bad, and thankfully the script doesn't have anyone give major speeches or moralizing, which is often where this type of movie can grind to a halt.  The one part where this could have happened is done rather well, and rather succinctly.

Director Mark L. Lester, one of the kings of low-budget exploitation films, keeps the pace nice and brisk and even gives us a few beautiful shots.  Not surprisingly, he also knows how to film the stunts well, and if that is going to be the title of the movie then it better deliver at least a few of them.