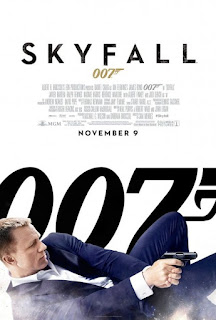 The James Bond series has been a frustrating one to get through.  While the character is indeed iconic, the movies suffer from a horrible sense of inconsistency.  It is to be expected for a series, with little continuity in either actors or story line, that has been going for just shy of 60 years, but just the fact that it has spanned decades and a number of changes in the lead actor should lead to more memorable and outstanding movies than what's come about.

It is easy to blame it on writers or directors, but they have been largely consistent - for better or worse.  Guy Hamilton directed what is still probably the best of the series, Goldfinger, but is also responsible for Moonraker.  John Glen gave us For Your Eyes Only, and followed it up with Octopussy.  The writers of the series have also been consistent, with the same teams giving us crap and then turning around a couple years later and giving us faith again in the series.  Richard Maibaum was one of the writers for a good portion of the films from the Roger Moore era through Pierce Brosnan, and the quality varies wildly.

One of the movies that gave me faith again in 007 was Casino Royale..  It was directed by Martin Campbell, who had also directed GoldenEye, and introduced us to Daniel Craig as the famous spy.  Campbell is a great action director, and Craig, like George Lazenby and Timothy Dalton before him, seemed to fit the character more as Ian Fleming had envisioned him.  But, true to form, two years later we got Quantum of Solace, which looked like it was directed and edited by a three-year-old on a sugar binge.  While the story was decent, the movie was a disappointing step down in quality, and in some places borderline unwatchable.

It would be four years before we got another Bond.  Craig is back, but we have a new director in Sam Mendes, who is best known for American Beauty.  Mendes, to his credit, knows how to hold on a shot for more than a fraction of a second, and, from the first scene in where Bond emerges from darkness with only part of his face revealed, I breathed an audible sigh of relief.

Bond and another agent, Eve (Naomie Harris), are pursuing a mercenary name Patrice (Ola Rapace), who has stolen a top secret list that, if decoded, could lead to the death of a number of undercover operatives.  The retrieval doesn't go as planned, and the resulting blowback leads to the Defense Ministry demanding M's (Judi Dench) retirement.  That is delayed due to a cyber attack on her office which results in a gas explosion.  Bond, despite not being in the best shape himself, is enlisted to track down the person responsible.

It's simple enough for a Bond plot, but it begins in Turkey and takes us to Shanghai, Macau, the literal underbelly of London and to a final showdown at Bond's ancestral home in Scotland.  We get a fine villain in Raoul Silva (Javier Bardem), who, for once, does his own dirty work.  Often in Bond films the henchmen are more memorable than the big bad guy, who barely gets any screen time.  Silva has his lackeys, but they are always there for support and to make sure he has the numbers for a proper operation.  It is refreshing to see a Bond villain in the center of the action rather than just spouting exposition.

As far back as The World Is Not Enough there has been a trend to devote more time to M.  The original role of M was to give the mission, meet Bond in some outrageous place in the middle of the film and look on with mild indignity at the end when he caught him with his belle de jour.  Judi Dench's M, rather than just upholding the role of a stuffy bureaucrat left over from the Empire, has gradually evolved into an active player in her own right, often guiding Bond on his official meetings and reluctantly aiding him when he starts moving outside the lines.  This time around she largely takes on a role that would usually be given to a main Bond girl - minus the sex, of course.

While all the Bond films are known for exotic location filming, I must give some credit to director of photography Roger Deakins.  Skyfall is beautifully shot, and one thing I have begun to admire are directors and cinematographers who are, at heart, photographers.  Many of the shots are beautiful to look at, particularly the landscapes of Scotland and the abandoned Japanese island of Hashima.  It is, again, refreshing to also see these scenes filmed in a way in which one can take in the surroundings and is not being jerked away at every second.  The contrast between this and Quantum of Solace can't be greater than the fight between Bond and Patrice in Shanghai, done completely in silhouette.

If I have one qualm with the movie it is with the token traditional Bond girl, a Macau prostitute named Sévérine (Bérénice Marlohe).  While some of the criticism about the character goes too far down the rat hole of woke buzzwords, both her seduction by Bond and his callousness toward her demise seem out of place with the rest of the movie.  If there is one thing that Quantum of Solace did right is that it bucked the trend of Bond and the main heroine getting together, and Skyfall largely follows suit, with Eve politely declining his unwanted attentions and M being a motherly figure.  By contrast Sévérine is  the sacrifical lamb that has shown up repeated in Bond films, and she is treated much worse than many of her predecessors.  Maybe the scene represents Bond's loss of humanity while his connection with M sees him rediscovering it, or that it shows that it in some way he is just as bad as Silva.  If that was the point the writers were trying to get across they failed miserably and just left the audience feeling uncomfortable with an unnecessary death that doesn't even forward the plot.

It's a testament to how good the rest of the movie is that this doesn't bring things to a crashing halt.  Silva's capture, with a great callback to his criticism of Q Branch, happens soon after, and the main plot of the movie continues to barrel along as it should.  Craig again does a great job in the role, noticeably displaying the toll that the job, and age, has had on him.  It's an example of how the humanity o a long-established chracter can be brought out in new ways without going the predictable route of the dark reboot.

Each actor in the series that has had a chance to do more than a coup films has a movie that defines them.  Sean Connery had Goldfinger, Roger Moore had the The Spy Who Loved Me and Pierce Brosnan had GoldenEye.  As good as Casino Royale is, Daniel Craig will always have Skyfall.  Even better, in the one series of films that have a connecting story, Skyfall can be enjoyed on its own; it stays wrapped in its own story, rather than relying too much on being connected to the whole Quantum/S.P.E.C.T.R.E. arc.  The Bond series has many medicore to bad films but, after all this time, it is nice to see that it can still thrill like it always has.