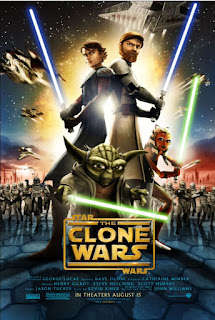 For all intents and purposes the prequel trilogy should have covered the Clone Wars.  Ever since it was mentioned in Star Wars there has been some mystery as to what the conflagration was.  It obviously involved clones, and some of those clones show up in Timothy Zahn's Heir to the Empire series, though that's now relegated to Legends status.  I had hopes that the prequels would deal with this time that has been suspiciously absent in Star Wars movies and the extended universe, but instead we get the beginning of the conflict in Attack of the Clones and the ending in The Revenge of the Sith.  Instead of an interesting period in galactic history George Lucas decided to focus on bad soap opera romance and Anakin's predictable downfall rather than exploring the one thing exciting going on, which was a galactic civil war.
After the prequels were over Lucas decided to go ahead and show us what happened between Attack and Revenge, starting with an animated movie released to theaters.  While the television series has been widely praised for introducing a lot to the canon, as well as fleshing out a number of characters that appear in the prequels but do little more than get killed five minutes after they are introduced, the introductory movie does not have a great reputation.
When Jabba the Hutt's (Kevin Michael Richardson) son is kidnaped, he offers to open up the Hutt-controlled space routes to Republic access if his child is rescued.  The Jedi Council decides to send Obi-Wan Kenobi (James Arnold Taylor) and Anakin Skywalker (Matt Lanter) to do the job, but just one problem: they are trapped in a pitched battle on the planet Christophsis, and Anakin is also saddled with his first padawan: Ahsoka Tano (Ashley Eckstein), the youngest in the history of the order.
Eventually the Jedis are able to get on with the job, but matters are complicated by Count Dooku (Christopher Lee) who is using his apprentice Asajj Ventress (Nika Futterman) to make it look as if the Jedis themselves kidnaped the Huttlet.  His goal is to get Jabba to enter an alliance with him, thus cutting off a vital part of the galaxy to the Republic.
I can easily understand why this did not go over well.  It should never have seen theatrical release but, instead, have run as pilot episode for the series.  While the ships, many of the droids and battles look fine, the aliens and the humans look like they are in a cut scene from a 1990s video game.  Obviously, the problem with that is that it is 2008, and computer animation in 2008 was light years ahead of what it was in the 1990s.  It is a complaint I have about the cartoon series as well - the blocky animation of the characters is distracting.  Count Dooku gets it the worst of any of them, looking like a bobblehead.
While I have some problems with James Arnold Taylor's voice on Obi-Wan, the character is still what one would expect.  What is better than expected is Anakin.  Where Hayden Christensen was as wooden as Count Dooku appears to be in this cartoon, Matt Lanter gives a a fine voice performance.  One could even detect feelings and emotions - something that it would have been great to see Christensen display  in the prequels. I am also glad to see both C-3PO and R2-D2 back in rolls in which they participate and aid other characters rather than just doing a Laurel and Hardy routine.  Unfortunately, the same can't be said for the battle droids, which become irritating quickly with every attempt that writers Henry Gilroy and Steven Melching make to be meta.
One point of contention I have heard is that Ahsoko is annoying.  Granted, I expected this to be a bit more kid-friendly, and when I saw that Ahsoko was supposed to be a youngling I had my concerns.  Happily, some of her brattier tendencies fade rather quickly, and she becomes a valuable part of the story.
This does work well as an introduction to the series, but it is really just that: a feature-length television pilot.  It holds together as such and is appreciable in that manner, but it is slight as a movie and, again, should have remained on the small screen where it belongs.
Star Wars: The Clone Wars (2008)
Time: 98 minutes
Starring: Matt Lanter, Ashley Eckstein, James Arnold Taylor, Nika Futterman, Christopher Lee
Director: Dave Filoni