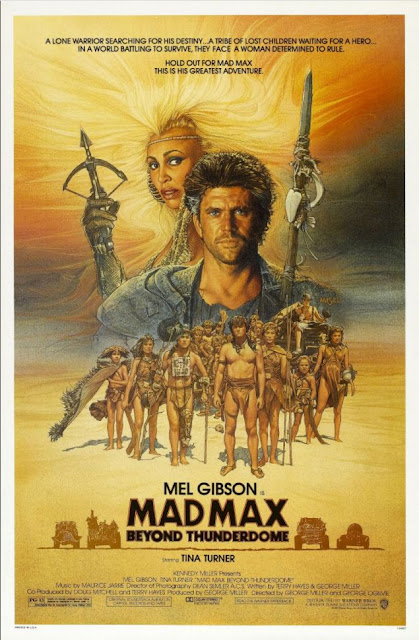 While Mad Max 2, known in the United States as The Road Warrior, didn't exactly set the box office on fire in the this hemisphere it did become a major hit on cable.  It was one of a number of movies that became staples on subscription channels in the 1980s, and its combination of innovative film making, wild stunts and a disintegrating world caught the imagination of viewers. It was referenced in Weird Silence (with Vernon Wells, the actor who played Wez, doing a cameo) and ended up sparking a number of knockoffs.

Along the way people discovered the original Mad Max, and found out there was a bit more to the story.  Upon coming to our shores in 1980 it was dubbed with American accents, and these were the prints sent to television and cable networks; we didn't get the real version of the film until the 1990s.  While the feel of the first movie was completely different, it eventually earned its own cult following.  In addition the movie's star, Mel Gibson, began to get more attention outside of Australia.  A number of serious movies, such as The Year of Living Dangerously and Gallipoli, showed off Gibson's acting talents, gaining him a wider audience.

With all the buzz around Gibson and Mad Max it was only a matter of time before the public got their fill of pale rehashes and got another chapter of the story.  In 1985 we got Mad Max 3, released to the rest of the world as Mad Max Beyond Thunderdome.  Taking place 15 years after the second movie (and 20 years after the first), it was meant to function as Max's redemption story and to end on a message of hope rather than despair.

After having his vehicle and his camels stolen by a pilot named Jedediah (Bruce Spence) and his son, Jedediah, Jnr. (Adam Cockburn), Max makes his way into a place called Bartertown where he hopes to get them back.  He makes a deal with Aunty Entity (Tina Turner), Bartertown's founder and ruler, who is having a power struggle with Master Blaster (Angelo Rossitto / Paul Larsson), the one responsible for providing the fuel that powers the town's electricity.  Max challenges the Blaster half to a fight to the death in an arena called Thunderdome, but is banished after failing to kill his opponent.  In the desert he is discovered by Savannah (Helen Buday) and taken back to a hidden canyon occupied by a tribe of teenagers and younger children that were abandoned when their guardians sought help.  The tribe mistakes Max for Captain Walker, whom they believe will return to save them.

Unfortunately, the revelation that he is not Captain Walker causes a schism, with part of the tribe remaining in the safety of their canyon and the rest seeking their promised land - which ultimately leads them, and Max, back to Bartertown, where Aunty decides that she hasn't finished with him yet.

The first third of the movie with Max in Bartertown fits in perfectly with the previous films, despite being more story driven and not having the slam-bang opening that Mad Max 2 did.  It does show that society, in some ways, is returning, albeit under a dictatorship that has found a way to capitalize on  the need for goods and the need for entertainment.  The entertainment may be brutal, but Aunty Entity has found a way to harness it in such a way that it largely keeps Bartertown peaceful, even if her authority constantly hangs on a thread.

It's the second third, where Max is taken in by the children, that seems to be the most divisive part of the movie.  It is understandable, since this was completely shoe-horned in from another proposed film about an isolated tribe of children after an apocalypse.  In tone it does seem to be different than what has come before it, but the same could be said for every Mad Max movie.  Personally, I don't mind it; to me it added another dimension to the world Max lives in, and it is obvious that George Miller is presenting us a time in which both Max and humanity are starting on the long path to redemption.

The last third again brings it more in line with Mad Max 2, presenting another grand chase (this time a number of makeshift vehicles and a train engine that was modified to provide the power to Bartertown), and this is where I find myself being more disappointed than with the inclusion of the kids.  There are some great scenes, some great stunts, but it pales in comparison Mad Max 2 and Fury Road.  It is way too short of a sequence for an entry in a series that built itself around automobile culture and pushing the limits of what kind of stunts can be done in a movie.  It still looks good; in fact all the action sequences in the movie are good, as these were the parts directed by George Miller, and he is truly one of the masters of his craft.

Second director George Ogilvie is largely responsible for the rest of the film, and he does a decent enough job in making it look like a world that would emerge from what we saw in Mad Max 2.  The world is still occupied by all the strange characters of the wasteland, many of whom have cultivated their own personalities and reputations since they are no longer bound by the rules of society.  Where the first two films took place during the last days of society, Beyond Thunderdome is clearly after a nuclear war, with situations even more difficult and people taking pleasure in whatever they can find.

Gibson once again provides a great, mostly laconic, performance, as the character usually plays a supporting role to whatever else is happening around him.  George Miller had just lost a longtime friend, Byron Kennedy, who had worked with him on the first two movies, and thus had very little enthusiasm left for this one.  Both Gibson and Miller were becoming known internationally, and Gibson himself would make the jump to Hollywood in Lethal Weapon.  Bruce Spence is back and, since he's playing a pilot again.  While it's a pivotal role, it also caused some confusion, as many viewers initially thought that he was he Gyro Captain.  A different actor may have been a good idea to avoid confusion (since they are both pilots), but it is obvious that Miller liked including him.

The true surprise is Tina Turner.  Turner was on a comeback streak at the time, with her 1984 album Private Dancer (which spawned "What's Love Got to Do with It" and a number of other hits) being one of the biggest of the year, and her appearance at Live-Aid being one of the highlights.  Where this could be looked at as stunt casting, Turner can act, and takes a roll that could have left her chewing cheesy dialogue and plays it rather understated.  It does get campy at times, but the most ludicrous dialogue and performance falls on Edwin Hodgeman as Dr. Dealgood, the MC for Bartertown's various entertainments.

While it is true that violence is toned down, it really doesn't appear that much was cut out.  It just was not intended to be as intense as the other two, and with Miller less involved it became what it is.  It is still a glimpse into a future that, thankfully, we never had to see.