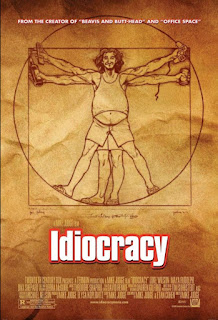 It was either the late 1990s or early 2000s that I discovered Cyril M. Kornbluth's short story, "The Marching Morons".  I was already familiar with its companion piece, "The Little Black Bag", about a largely automated medical device that travels back in time and is misused in the current day.  The bag itself was designed by the remaining, hidden cadre of intelligent people of the future, made fool-proof in order to make sure that the general population of the time could actually treat illnesses, while pretending to know what they were doing, and not causing any harm in the process.  That particular story had been compiled and also filmed a number of times for anthology shows.

When I read "The Marching Morons" I realized that there was only one place I recognized it from - The Simpsons.  In the 10th episode of their Halloween themed Treehouse of Horror, there's a segment called "Life's a Glitch, Then You Die".  It's based on the current Y2K fears, but also features a similar con to "The Marching Morons", which convinces the "undesirables" of the world that they are also going to Mars with all the best and brightest, but instead are being hurled into the sun - the same as the destination for most of Earth's population in Kornbluth's story, though promised a paradise on Venus.

Idiocracy often gets compared to Kornbluth's story, as some of the same things exist in the future: automation to keep society from outright destroying itself, but little else in the way of infrastructure or advancement.  Instead people live their lives watching television and buying useless products rather than any type of intellectual pursuit.  Unlike Kornbluth's story we never meet any hidden intelligentsia; instead, our two main characters become the ones responsible for trying to rescue humanity from itself.

Joe Bauers (Luke Wilson), an army private who has done his best to keep off the radar, and Rita (Maya Rudolph), a prostitute promised a commutation if she participates in the experiment, are both put into suspended animation.  The experiment is supposed to last a year but, due to a number of circumstances, ends up being forgotten and their pods disposed of after the military base is closed.  500 years later a garbage avalanche reactivates's Joe's pod, and he soon finds himself in a deteriorating, overpopulated world full of people who are barely mentally functional.

Rita also wakes up and finds that her job has become much easier, as she can string people along for money.  After Paul is arrested for not paying a medical bill (and not having an identification tattoo), the AI system that maintains what little order there is the society renames him "Not Sure" and puts him, briefly, though the prison system, where his IQ test reveals him as the smartest person in the world.  With the help of his lawyer Frito Pendejo (Dax Shepard) he finds Rita and they go in search of a time machine to get them back to the 21st century.  Unfortunately, Paul's IQ test has come to the attention of President Camacho (Terry Crews), who appoints him Secretary of the Interior and tells the nation that all their problems (crop failures, dust bowl, economic collapse) will be solved in a week.

In the usual modern effort to disparage anything even remotely satirical or humorous, director and co-writer Mike Judge has been accused of supporting eugenics and classism in his view of how the world turns out.  Let's get classism out of the way quickly - in the world of 2505, there is generally one class, no matter what the job is - starving.  They have tons of cash (20 billion dollars for an amusement ride, for instance), but it doesn't matter due to a combination of runaway inflation and a general lack of goods.  It is truly a classless society (pun kind of intended), but not because of a rich intelligentsia.  President Camacho, supposedly the most powerful person in the country, is maybe slightly more intelligent due to being able to string a couple sentences together, but the only thing he has more than anyone else is large guns (again, pun kind of intended).

That said, I am aware that the opening character of Cleavon (Ryan Ransdell) represents the worst stereotype of white trash, I again counter that Idiocracy is not a movie of nuances.  We are all aware that having a certain amount of cash does not automatically make someone smarter or dumber than everyone else.  It is a safe joke, granted, but it also means that, in a movie that already features real corporations confiscating people's children and running prostitution services, it was still a safer path than using individuals that might be too recognizable.

As for eugenics, Judge and Etan Coen were not going for scientific accuracy.  Eugenics also has a racial component that is missing from this future society, and though it does follow the same idea as "The Marching Morons" that the dumb people eventually bred faster than the intelligent people, there is much more to intelligence than genes.  A deeper look into Idiocracy's society (and probably deeper than Judge or Coen ever intended) shows a society that, over the centuries, largely gave up social responsibility to advanced Artificial Intelligence while engaging in the pursuit of base pleasures.  Intellectualism in this society is often violently attacked, pointing toward some sort of organized plan that steered humanity in this direction.  The simple idea of dumb people breeding, while it makes for an hilarious way to set the premise for the film, should not be taken as Mike Judge endorsing slipping back into the days before we knew more about how humans are put together.

The point is that we need a simple premise to get to the main plot of the movie, which is that of two average people suddenly finding themselves in a possible place of power.  Luckily, it's the right two people, since things could have gone even worse afterward - a society where brute force and low intelligence is encouraged is just ripe for being turned into a mass, unpaid workforce by the first dictatorial minded person to come along.  The only reason that hasn't happened at this point in the movie is that no one has the ability to put two and two together in order to rise to that position - well, save someone who shows up at the end, but that could go almost any direction depending on their ambitions.

Like Judge's previous movie Office Space the plot is largely a device to provide a number of jokes that play on the situation the characters find themselves in.  That said, neither Luke Wilson nor Maya Rudolph have to do much more than be the fish out of water that let us see the new world through familiar eyes.  It is Terry Crews, in a wonderfully over-the-top comedic performance, that becomes the most memorable person in the movie, next to the greeter at Costco.  Perhaps what is even more frightening is that it wouldn't take us all having the IQ of a napkin to vote such a person into office.

While the faults slapped on the ideas of Idiocracy do not really stick, the movie does have a number of flaws due to the way it was handed by Fox.  I am surprised that, given its cult status, Mike Judge hasn't taken the opportunity to go back and polish it up some; what we have is a film that was about 95 percent done when released, with a number of key visuals (most noticeably in the scenes of President Camacho's motorcade) and backgrounds missing.  It also runs a bit short, which is a shame since there were parts that were cut out, like Joe's early visit to the Museum of Fart.  Then again, it may have been a good idea, as it would have been too quickly followed up by the joke about the movie Ass being the most popular in the country.

The movie has grown to be a lot more than Mike Judge ever intended, and in many cases when it is brought up these days I doubt it is by those who have sat down and watched it, but rather pseudo-intellectuals who latch onto pop culture references in order to vent their frustration that their political side is not in complete power.  It is definitely worth the time, as the movie is funny from beginning to end, and there is a lot more going on under the surface.