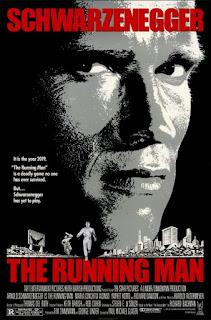 I remember it was the early 1990s.  I was in an arcade - an arcade in which, if I remember right, I beat a number of friends soundly at air hockey - when I found an arcade game calles Smash TV.  The point of it was that the player was in a game show and had to kill as many people as possible to advance, while grabbing prizes and working their way through the levels to gain their freedom.  I loved it, as it was something I had been looking forward to in a game for a long time.

As for The Running Man, which provided inspiration for the game, I am not sure if I had seen it at the time I discovered the game.  When I decided to revisit it for this review I was sure it had come out later than it did, but quickly realized (before checking the date) how truly '80s the whole production looked.  I know I didn't see it in the theater, as there was no way I was sneaking in at 15 with my baby face, but I am quite sure I saw it sometime before 1990.  I at least know I had seen it before I read the original Stephen King book (collected together with some other early stuff of his in The Bachman Books), because I remember being shocked at the differences.

The Running Man takes place sometime after 2017 in a police state with practically no economy (and, by the sets and clothes, little change since 1987) that uses bread and circuses - well, at least the latter, since it seems they're pretty bad at providing the former - to keep the people from revolting.  Certain criminals, rather than doing jail time, are put through a three-hour chase from various "Stalkers" and, if they survive, they have the chance of winning such prizes as a trial by jury or a pardon.

Ben Richards (Arnold Schwarzenegger) is a cop and, after refusing to fire on unarmed protesters, is sent away to a work camp.  The police go ahead and murder a number of people anyway and blame it on Richards, refashioning him the "Butcher of Bakersfield". With the help of resistance operatives William Laughlin (Yaphet Kotto) and Harold Weiss (Marvin J. McIntyre), Richards makes a prison break.  He attempts to reach his brother, but instead finds that a woman named Amber (Maria Conchita Alonso), who works for the government's ICS entertainment network, has taken up residence.  He kidnaps her in a failed attempt to escape Los Angeles, and, when recaptured, is given a chance by Running Man host Damon Killian (Richard Dawson) to participate in order to save his friends.

Richards is predictably double-crossed, but it turns out that the opportunity the resistance has been looking for exists in the show's arena.  If Richards can evade the Stalkers and win the game, he may be able to not only go free, but strike a blow for the rebels.

The whole idea is ludicrous and, to give The Running Man its due, it never attempts to take any of the proceedings seriously.  Arnold is given his usual quips to say while slicing and dicing through the Stalkers, who themselves are played by professional wrestlers (including Jesse Ventura), stuntmen and exploitation film veterans.  They are all dressed in outfits that Vince McMahon would think were pushing boundaries of good taste, and are merely fodder for Schwarzenegger to take care of while stretching out the little bit of plot there is to fill the running time.

Every accommodation possible to make this an Arnold Schwarzenegger vehicle.  He does his "AAHHGGHH" thing a bit too much, repeats a famous line from The Terminator and generally does everything that one would expect in the McBain parodies from The Simpsons.  The problem is, there is supposed to be someone named Ben Richards doing something other than making bad puns, and the character gets lost somewhere in Arnold's biceps.

Another thing I remember about The Running Man was it being a lot more violent; it's almost as bloodless as most PG-13 movies today.  In fact, if it wasn't for having too many f-bombs (probably added in to make sure it didn't happen), the film could have passed for PG-13 at the time it came out.

Paul Michael Glaser was a television director, and it shows.  Little of the movie has any cinematic style, and even the action scenes lack any real punch.  In the end, it's just a by-the-numbers action movie with ham-handed attempts at satire, and honestly was a step backward for Schwarzenegger at this point.