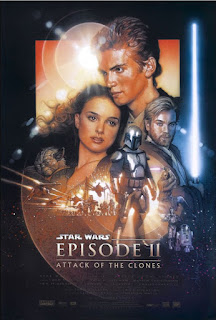 While it did well financially, Star Wars: Episode I - The Phantom Menace was not exactly received with open arms by the fans.  While Jake Lloyd got a lot of undeserved blame for his role as a young Anakin Skywalker, the main source of discontent was Jar Jar Binks.  The Return of the Jedi may have been a bit too kid friendly in order to make that sweet merchandise money, but The Phantom Menace went all out and the reputation of the series suffered for it.

What the next movie needed was to emulate The Empire Strikes Back.  That meant a darker tone, introducing more of the actual plot of the trilogy and including some conflict that would pay off in one way or another once everything was wrapped up.  Film maker and frequent George Lucas apologist Kevin Smith, before Attack of the Clones appeared in theaters, assured us this was it. Anakin would go to some dark places, Jar Jar played a minimal role and we would get to see Yoda in action.  We were promised a return to everything that made Star Wars great.

What we got is something that made The Phantom Menace look halfway decent in comparison.

10 years after the events involving Naboo and the Trade Federation Sheev Palpatine (Ian McDiarmid) is still Supreme Chancellor of the Galactic Senate, while Padme Amidala (Natalie Portman) has served her time as queen and was appointed Senator by her successor.  Jar Jar Binks (Ahmed Best) is an aid, and her representative in the Senate when she cannot attend.  As for Anakin Skywalker (Hayden Christensen), he is still being trained by Obi-Wan Kenobi (Ewan MacGregor), but is showing more and more impatience to become a full-fledged Jedi.  As for the Galactic Republic, its days are numbered; a separatist movement has developed, threatening civil war as a number of solar systems decide to back out.

When Senator Amidala survives an assassination attempt, Obi-Wan and Anakin are assigned as her security detail - a fact that reignites Anakin's feelings toward her.  A second assassination attempt leads to clues as to who is behind it, and Obi-Wan sets off for the planet of Kamino where he finds a large clone army has been created based on the DNA of bounty hunter Jango Fett (Temuera Morrison), supposedly ordered by a Jedi that has been dead for over a decade.  Kenobi follows Fett to the planet of Geonosia, where he discovers Count Dooku (Christopher Lee), leader of the separatist movement, and his allies producing a droid army.

While Obi-Wan is on his mission, Anakin escorts Amidala back to Naboo, but soon they leave for Tatooine when Anakin senses his mother (Pernilla August) is in trouble.  Eventually contact from Obi-Wan leads them, and the Jedi council, to come to Kenobi's aid on Geonosia.  The resulting battle marks the beginning of the Clone Wars.

While at least this time around we have a civil war brewing and some real political intrigue, this couldn't be further from The Empire Strikes Back if it tried.  It was obvious George Lucas was mirroring scenes and plot points (the romantic subplot, a chase through an asteroid field, the introduction of a bounty hunter in Mandalorian armor) that he wanted it to be as close to the second chapter of the original trilogy as possible.  The only parts that succeeded were the majority of the action scenes.  We get a chase through the streets of Coruscant, our heroes fighting strange creatures in an arena and a grand climactic battle between various battle droids and the Republic's clone army.  We do get the promised fight between Yoda (Frank Oz) and Count Dooku - one that starts off well, and, despite the millions put into making a CGI Yoda, still looks like Christopher Lee is swinging blindly at a piñata.

That brings us to the effects.  Some of them are good, particularly on Coruscant, but Lucas tried to rely on them too much.  The double sunset on Tatooine looked more realistic in 1977; here, it looks it came out of a video game.  The creatures in the arena are cool, but I will never understand the need to add ridiculous amounts of teeth to CGI monsters.  The clone troopers themselves are all an effect, and it works to varying degrees, the best being against the droid army, as the whole thing is just a massive animated battle.  In many cases, especially during flying scenes, it doesn't look any better than it would if Lucas had just gone with a matte painting - and I could swear that a good deal of the backgrounds were matte paintings.  I would hope he didn't go through all the expense and trouble to make a movie look like it was 20 years older than it was.

The worst thing about Attack of the Clones, since we don't have to deal with Jar Jar Binks, is the romance.  Hayden Christensen and Natalie Portman barely have an ounce of chemistry, and although Christensen gets the lions share of the blame for having only two line deliveries - robotic or spoiled teenager - Portman delivers her lines in the same monotone as Christensen.  She just doesn't whine as much, which doesn't give her the same chance to get on the audience's nerves as Christensen does.  The one time they do show some life is when they ad-libbed a conversation about "aggressive negotiations," largely because George Lucas thought the dialogue he had written was horrible.  I hate to see what it was, since this is the same movie that has the whole "sand" conversation.

In addition to the horribly written lines, Anakin's attempts to woo Amidala are downright creepy.  I don't know if George Lucas understands that "m'lady" has become an awkward way of wooing a woman in men's rights and pickup artists circles, and Anakin's repeated sarcastic utterances are just the icing on an awkward and dodgy cake.  There is no hint at all during most of their conversations that she reciprocates, and he continues to push.  It does seem like something an 18-year-old with no experience with women would do, but then some of his advances make me wonder why she doesn't immediately demand some other type of protection, like a droid that can keep its hands to itself.

On the plus side one can call Christopher Lee Count Dooku, make him swing at a cardboard Yoda and give him the same ridiculous dialogue as everyone else and he'll still deliver.  Ewan MacGregor at this point inhabits the role of Obi-Wan Kenobi perfectly, and the majority of the best scenes involve him.  Yoda is fun and it's nice to see him out and about, although his backwards way of talking just becomes too much at points.  Also in the mix is R2-D2 (Kenny Baker) and C-3PO (Anthony Daniels), with the former often saving the day and the latter used largely for slapstick.

There is nothing that can be done to redeem George Lucas's dialogue, but cutting the entire romance down to hints and a final "I love you" at the point where they think they are going to die would have sufficed.  The romance between Han Solo and Princess Leia was largely a last-minute addition when it became obvious they were the better pairing rather than her and Luke Skywalker, and it never seemed forced.  This small change could have knocked 20 unnecessary minutes out of the movie, and made it quite a bit better, because it would have focused on the mysterious clone army and the gathering war.  It could have also ended on an uneasy note like Empire did.  Unfortunately, Lucas chose to push a romance in order to make Anakin more human, and it just made him look more like a potential date rapist.

While anything outside of the original trilogy has its good and bad points, Attack of the Clones was, even more than The Phantom Menace, a complete misfire.  Lucas still knew people would go to see the next one, as most of us had been invested in this for 25 years.  It was just at this point that he began to realize that we were not going to just accept any old thing he dumped in our lap.  The only dread was that there was another two and a half hours of Hayden Christensen coming at us at some point in the future.