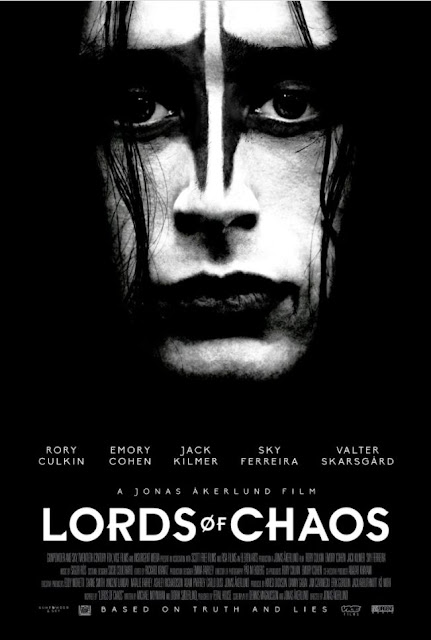 I have to say that it is rare to watch one of these band biopics and have it tell you, at the start, that a good deal of what you are about to see has been made up.  I usually assume that anyway.  Often it is based on the views of one person in the band, and that person frequently has a vendetta against someone else, or against the entire band in general.  Other times it is made by a super fan who wants everything to be perfect - unless they themselves also have some problem with a member of the band.

Lords of Chaos is based on the book of the same name, and chronicles the beginnings of the band Mayhem, who became the godfathers of Norwegian black metal.  I am not going to go into all the information on how this form of music came about, but suffice it to say the Norwegian version tended to go even more lo-fi than the Swedish version (pioneered by Bathory, who happens to be a band director Jonas Åkerland worked with in their early stages).  Where early Swedish black metal was almost close to punk, the Norwegian style, pioneered by Mayhem guitarist Øystein Aarseth, added in doom and sludge metal influences and wasn't too far off from Tony Iommi's pioneering sound with Black Sabbath.  The vocals were harsh, the drumming aggressive (with heavy use of blast beats) and the lyrics as dark as can be expected.

While Mayhem formed in 1984, in the movie we are introduced to them at some unknown period, but probably around 1987 as it begins with their drummer Kjetil Manheim (James Edwyn) leaving and being replaced by Jan Axel Blomberg, better known as Hellhammer (Anthony De La Torre).  The band is searching for a singer, and finds one in a troubled Swedish teen named Pelle Ohlin (Jack Kilmer), who goes by the stage name Dead.  Dead and Aarseth (Rory Culkin), who goes by the stage name Euronymous, become close friends and the band goes on to some regional success.  Things seem to be going well when Dead suddenly commits suicide.

Euronymous soldiers on, starting a label called Deathlike Silence and opening up his own record store.  During this time he meets a young man named Kristian Vikernes (Emory Cohen), who prefers to go by Varg, and has recorded his own music under the name Burzum.  The two start working together, but Euronymous becomes concerned about the extremes Varg is willing to go to when it comes to living out his philosophy and his music, while Varg comes to regard Euronymous as a thief and a poseur.  This eventually leads to Varg murdering Euronymous.

Normally I wouldn't reveal such a spoiler, but it's an old story that played out in the black metal community and the press nearly 30 years ago.  In real life, Varg served about 9 years of a 21-year sentence before being released, and both Mayhem and Burzum are considered, for good reason, cornerstones of not just Norwegian black metal but of extreme metal in general.

While the events above generally follow how things happened, the movie often decides to go into pure exploitation territory, largely abandoning the musical side of Mayhem to focus on the relationship between Varg and Euronymous, and exaggerate it to hilarious extremes.  In real life Varg Vikernes is not in any way a good person.  While he now disavows many of the extreme views he held in the past,  he did have National Socialist leanings and even founded a far-right nationalist party.  In addition to being convicted of Aarseth's murder, he was also found guilty in the burning of three churches - however, if you believe the movie, you would think he lit every house of worship in Norway on fire.  Varg is portrayed as a  moustache-twirling villain one moment, and as borderline mentally challenged the next.  The man has problems, and he is certainly not someone I would ever want to meet, but Åkerlund and co-writer Dennis Magnusson turn him into a cartoon.

Meanwhile, Euronymous, though portrayed as manipulative, is not treated with the same disdain.  This is surprising, since he held extreme Stalinist beliefs - not just leftist or communist beliefs, but in the "break a few eggs to make an omelette" sense. Rory Culkin portrays him as a misunderstood loner trying to be more evil than he actually is, largely making excuses for his bad behavior rather than looking at it honestly.  To make him even more likable he gets a girlfriend in Ann-Marit (Sky Ferreira), so the audience can see how nicely he treats women in contrast to Varg treating groupies like meat.  Problem is, Ann-Marit never existed.

Another thing that is noticeable is a severe lack of "Ø" and "Å" in most of the actors' names.  Most of the people involved are children or siblings of famous American actors.  The movie is filmed partially in Norway (a large part is in Budapest, Hungary), about a Norwegian band, and the closest thing it has to a Norwegian is a Swede - Valter Skarsgård, who plays Bård Eithun, Mayhem's drummer at the time. I have no idea what the reasoning in the casting choice was, since I am sure there were plenty of Norwegian actors who could have played the parts.  Still, Culkin and Cohen play their parts well, even if by all accounts of people who knew the real life musicians there is little that is accurate to their personalities or even to what went on at the time.

To up the exploitation in the film, Dead's suicide is shown in graphic detail, as is Bård's murder of a homosexual man in a park in Lillehammer.  Dead's suicide foreshadows how these two murders would be filmed - straight on, relentless stabbing, and with every effort to make it look as real as possible rather than a horror film.  It is refreshing to have some honesty in what this looks like, rather than making surrounding the events with special effects.  However, it leads one to question whether we are being shown so much to make us hate the characters more, or if in some perverted way Åkerlund is trying to celebrate these acts as the ultimate expression of being "trve kvlt" rather than it being the act of young men who were living a life of few, to no, consequences for their actions and were beginning to think themselves invincible within their own world.

My criticisms throughout may sound like I didn't care much for the movie.  I admit I didn't care for aspects of it - seeing even a fake cat in a noose gets my blood boiling, especially since by many accounts Dead, though having an obsession with dead things, didn't go around purposely killing animals for fun.  In fact, as important as Dead was in Mayhem's history (despite never releasing an official record with him on vocals during the three years he was with them), he is in and out of the movie in the blink of an eye.  Euronymous may have formed the sound, but Dead formed the image, wrote the lyrics and was the focal point for the audience.  To see him used more as a plot device to, again, make Euronymous look better to the people watching the film is a huge mistake.

Still, despite some major problems, the film does have a lot of good points, largely in the acting.  I just wish it stuck more with the truth, displaying both Euronymous and Varg as the flawed human beings they are, and paying more attention to an influential band that is still together and performing to this day rather than the lurid aspects of some of its members.