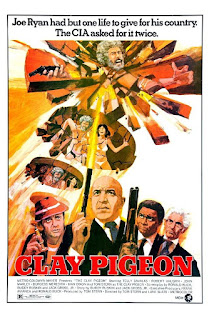 Clay Pigeon is a strange film.  It's pretty much a forgotten early '70s hippie exploitation film from Tom Stern, a character actor that was known for bit parts in biker films.  He took what money he had earned from his past movies, borrowed some more and talked MGM into distributing the film with promises of a portion of the gross - something that never came, as the movie was in and out of theaters despite having a decent cast.

Stern plays Joe Ryan, a Vietnam veteran and ex-police officer living as a hippy on the streets of Los Angeles.  Ryan was awarded the Silver Star when he jumped on a grenade that turned out to be a dud, which often gets him a pass when needed, although he seems to play that ace rarely.  When he spends some time in jail for taking a cop's motorcycle for joyride he is contacted by Agent Redford (Telly Savalas), who wants to help him flush out drug kingpin Neilson (Robert Vaughn).  Ryan refuses, but Redford decides to force the issue, putting Ryan on Neilson's radar, and resulting in his life being completely destroyed.

The main issue with Clay Pigeon is that it spends a good part of its time not knowing what it wants to do.  I wouldn't say any of the actors do a bad job, despite some of Stern's writing being clunky.  He and Lane Slate do an average job of directing, and they do manage to give us a decent climactic shootout, even if the last scenes are horribly executed.  I don't know particularly whose idea it was to have a truck do a slow-motion roll off a sand dune for two minutes while an Arlo Guthrie tune plays, but still nothing here gets as self-righteous as the Billy Jack films.

The problem is that it seems like the script was written in spurts at some point, and nothing really comes together.  Neilson is said to have originated somewhere in China, but they didn't even go the length of putting Vaughn in yellowface.  They put him in different get-ups with a series of different hats, and let him just do his thing, but nothing says brilliant drug mastermind from the East.  Also, from the beginning, I was wondering if Redford was the bad guy.  At one point he appears to be giving a man a new passport and a handful of cash, and then murders him.  It's later explained it was an associate of Neilson.  If Stern was trying to show the lengths Redford would go to do his job, then it is too early in the film for the scene to click, especially with no dialogue.  There are also scenes that may or may not be dream sequences, and Redford's plan that forms the basis for the whole plot - making Neilson think some guy is pretending to be him - makes about as much sense as anything else going on.

It is also difficult to tell how anyone fits in.  Ryan's friend Freedom (Burgess Meredith), is obviously a good guy, as is Ryan's estranged wife Angeline (Marilyn Akin), but how does Neilson, a drug kingpin high up in the food chain, know a teenage runaway junkie like Tracy (Belinda Palmer) that only gets her stuff three or four people down the line?  Is Ryan's ex-girlfriend Saddle (Marlene Clark) an associate of Neilson or a madam pimping out underage girls?  If the latter, then why would Ryan have anything to do with her, especially when his moral compass won't let him aid Redford in his games?

The fact that nothing, other than Akin and Clark frequently getting naked, happens throughout most of the movie doesn't help at all.  The cast, particularly Burgess Meredith (who gets to be surrounded by nude young women at one point, and obviously is happy as a clam) and Robert Vaughn, seem to be having fun.  Tom Stern himself thought that this would be his entry into the mainstream, and lead to more director or lead man rolls.  None of that worked out; in fact, when trying to find more information about him, I soon discovered he doesn't even rate a Wikipedia entry.

I can't say this is worth the trouble seeking out, as the version I saw appeared to be pan and scan and, from what I understand, DVD versions are the same but with worse prints.  I can't really see anyone going through the effort to do much more with it, because it doesn't really have anything too interesting to say, although I think Stern thought he was making a comment about Vietnam and the treatment of veterans - however, if he was, he failed miserably.