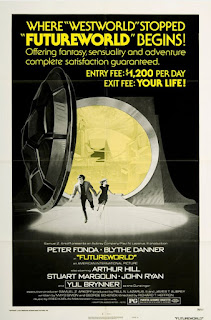 Michael Crichton's Westworld was good enough to overcome a modest budget to inspire not just one, but two television shows.  The original was a short-lived series called Beyond Westworld, which aired in the latter part of the 1970s, and quickly disappeared.  The latter is the one currently preparing for a fourth season on HBO.
There was always more to the story than a robot gunslinger stalking guests at a high-end resort.  Like in the show, the whole resort, with its differently themed "worlds," goes completely out of control as an early idea of a computer virus starts to wake up the park's exhibits, who then turn as one against both guests and staff.  Also, within the last couple seasons of the show, it has explored the fact that Delos, the corporation behind the theme park, was into quite a bit more than entertaining a few rich folks.
Season three of the show was a bit of a departure, taking us away from the park and into the futuristic world that spawned it.  It was refreshing, not only to see the show not retreading the same plot lines, but also to see some acknowledgement that there was another movie released to cash in on the success of Westworld.  The show handled many of the concepts better, and Michael Crichton had absolutely nothing to do with the sequel, but Westworld earned enough money in 1973 to give us Futureworld three years later.
The events at Westworld and the surrounding areas has caused Delos no small amount of scandal, and two years later they are ready to reopen.  They have wisely left the park at the center of the scandal closed, but have reopened the areas that provide Roman and medieval experiences as well as adding a new attraction, Futureworld, which allows guests to simulate spaceflight and trips to the Moon and Mars.  In order to drum up publicity, and convince the public that everything is now safe, they invite television personality Tracy Ballard (Blythe Danner) and newspaper columnist Chuck Browning (Peter Fonda) to visit.  The executives at Delos agree to provide unlimited access to Futureworld and the entire operation.
They are greeted by their host Duffy (Arthur Hill) upon arrival, and at first everything seems fine.  However, Chuck, prior to arriving at the park, had an encounter with a man named Frenchy (Ed Geldart) who said he had some dirt on Delos, but died before he could explain what it was.  It soon becomes apparent that the only thing that Delos learned from the tragedy was that robots could be more intelligent than originally intended, and they have decided to use them to replace key people so that the world will be under their control.
There are a number of problems with Futureworld, and not just the fact that it is almost 20 minutes too long and has long stretches of nothing interesting happening.  To do a proper world domination film takes a good villain.  This has two potential villains, one in Duffy and one in Dr. Schneider (John P. Ryan), but neither of them are allowed to do more that spout a little exposition and look conspiratorial.  At least Duffy gets in a short gunfight with our protagonists, but the confrontations that have any sort of excitement or tension are left toward the end, and involve neither Duffy nor Schneider.
Peter Fonda and Blythe Danner are good as can be expected, even though they really don't go beyond the stereotypes their roles require.  Stuart Margolin is a stand-out as a maintenance technician named Harry, one of the few humans left at the park, who works in environments that the robots can't go and spends the rest of his time hanging out with his mechanical friend Clark (James M. Connor).  Yul Brynner is completely wasted, in his last movie appearance, as the gunslinger, returning not as his previous menacing juggernaut character but as part of a dream sequence that Tracy has - and it makes absolutely no sense that he would appear in her dreams, nor is it ever explained. There is also a game show winner who gets an all-expense paid trip to the park, spends some time annoying other characters and then is forgotten in the rush to bring the movie to some sort of conclusion.
There are just so many missed opportunities to make a better movie.  If Tracy had been a robot before coming to the park, not knowing that she was and Delos not knowing, and then the other events unfolded - that would have made for a much more interesting movie, and maybe explained the dream sequence.  As it is, Futureworld barely even touches on the fact that there are most likely robots impersonating heads of businesses and key government officials by the time Browning and Ballard discover what is happening.  This movie was made cheaper than Westworld, with the usual microbudget one would expect from American International, but it would have cost nothing to provide a better story.  It wouldn't have even meant new effects, settings or anything else; it would have just meant someone taking the time to write a decent sequel.
The movie did provide a few firsts.  One was some of the first CGI effects, largely on the computer screens showing three-dimensional digital imaging.  Another was that, in 1979, it became the first American movie to receive theatrical release in the People's Republic of China as Jimmy Carter worked to improve relations at the time.  Too bad we didn't send them a better film, like Star Wars, but I guess this was inoffensive enough.  It often got played on Saturday afternoon television, but there is a reason why it was largely forgotten - except, of course, by those making the television show, who wisely ran with the some of the concepts the movie raised, and took it in a direction I would have liked to have seen here.
Futureworld (1976)
Starring: Peter Fonda, Blythe Danner, Stuart Margolin, Arthur Hill, John P. Ryan
Director: Richard T. Heffron