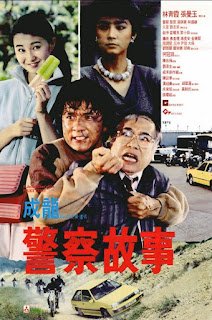 Sometimes I feel guilty watching Jackie Chan films.  Not because of quality - most of his films are consistently a joy to watch - but because I realize that I am watching a movie that could have easily made the news for the all the wrong reasons. Early in his career Chan began doing most of his own stunts, and that has continued (though to a lesser degree) even though he is now in his 60s.
Police Story is one of those films that almost became his last.  One scene, where he dropped into a lighted display case in a department store, resulted in him being taken to the hospital after he briefly stopped breathing.  As the universe usually has a sick sense of humor, it almost ended up being a split-second scene rather than one of his major set pieces that spelled the end for him.  But, luckily, he came through, and eventually, after years of trying, broke in into the U.S. market.
It was the U.S. cut of this movie I originally saw, dubbed in English and with a healthy number of the scenes someone at New Line Cinema thought were boring trimmed before release.  We got the movie in the 1990s, after the success of a number of his other films as well as the import of many movies of his contemporaries in both Hong Kong and mainland Chinese cinema.  It always got me that, even after it was proven there was a U.S. market outside of Asian enclaves for these films, the studios that brought them over didn't trust that we could read subtitles or get Chan's humorous parts of the films, which often boiled down to sitcom-style misunderstandings and physical comedy, neither of which are lost on an international audience.
Despite the fact that by the time this came out in the States it was obvious Jackie was a lot younger than than he was in most of the movies that were released here, it was nice to be able to have the chance to see this after the success of Supercop (which was actually Police Story 3), even if it was in reduced form.  Given the opportunity to see it subtitled, and intact, there was no hesitation.  I also realized, after years of not getting the opportunity to sit down and watch one of his movies, why I used to make it a point to go out and see them whenever they came out.
Chan Ka Kui (Chan) is a police officer who manages to catch a big crime boss, Mr. Chu Tao (Yuen Chor) during a drug raid.  He still does his duty despite being bribed with a suitcase full of cash, and as a result becomes a hero to the department and the public.  The result of his heroics is having to babysit Selina Fong (Brigitte Lin), Mr. Chu's secretary, whom the police want to use as their main witness.  Understandably, Chu wants Selina out of the way, but after a failed attempt on her life she still flees custody.  Not only does Chan lose track of Selina, but he botches his court appearance, resulting in Chu being let out on bail and Chan being demoted to working a local police station.  Despite the setback he still keeps up the search for Fong, which winds up with him being framed for murder and having to go after Chu himself.
There is a fair amount of gun play, but it never becomes the over-the-top bloodbath it would with an American action film.  Most of the action, as with many of Chan's best films, is physical.  He holds onto the back of a bus with an umbrella, deals with mobs of bad guys and slides down a pole wrapped in Christmas lights to retrieve suitcase full of evidence.  It also has one of the most unique car chases as Chu and the police literally drive through a squatter village, wisely shown from a distance as it devolves into an avalanche of buildings amid exploding propane tanks.  When he's not using his skills against his opponents he uses physical prowess to handle four phones at once when left alone in a police station.
While I don't agree with anyone not involved in a movie making edits, I can understand some of the concerns regarding the many scenes involving Chan's girlfriend May (Maggie Cheung), as some of the comic misunderstandings with her drag out a bit and take away from the action. Still, there is enough that is genuinely funny that he an be forgiven his indulgence.  Parts of the phone scene, as funny as it is, get a bit concerning when it turns out that some of the people calling are reporting rape and domestic abuse and it is handled as comedy.
The bad guys, including Chu, and much of the police force are one-dimensional, but many of them are there to serve as a means to an end, and as usual that is to allow Jackie Chan to do what his audience wants. Police Story remains a favorite of Chan himself, and in fact the favorite of all the movies he directed. It also remains a favorite of mine after all these years, and it was nice to finally get to see it as intended.
Police Story (1985)
Time: 100 minutes
Starring: Jackie Chan, Brigitte Lin, Maggie Cheung, Yuen Chor
Director: Jackie Chan