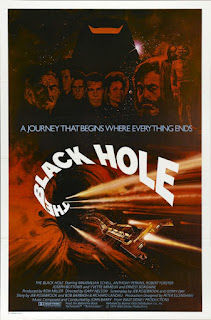 If anything The Black Hole got me even more interested in astronomy at a young age.  Due to my interest in space travel, and the science behind it, I learned early on that the reality of entering a black hole was more of a frightening thought than an exciting one.  There is no other side of the "hole" - one gets dragged down to a singularity, and that's the end.  Even worse was when I learned about spaghettification, meaning the part that is nearest the singularity begins to get stretched to the level of the very molecules being pulled apart.

Regardless of the science, I remember wanting to see this movie as a child.  I spent a lot of time at the local library, and one of the books available was the comic adaptation of the film.  Later I got my hands on other adaptations, including the short-lived Beyond the Black Hole.  I really wanted the action figures, particularly V.I.N.C.E.N.T., Old B.O.B., Maximillian and the Sentry Robots.  Star Wars was always going to be my central collecting obsession, but those Black Hole ones looked great.

I did not see the movie when it opened.  Turns out not a lot of people did.  Despite being Disney's first PG film, the controversy surrounding the fact that it was a PG Disney film and the ongoing popularity of Star Wars and its knockoffs (Battlestar Galactica was doing a good job of riding its coattails at the time), audiences generally stayed away.  Partially it was Disney's fault for releasing such a movie right before Christmas, when a summer release would have been better.  Then again, there is a reason I mention the robots in the list of action figures I remember - the humans, largely, were forgettable.

The USS Palomino, crewed by Captain Dan Holland (Robert Forster), Lieutenant Charles Pizer (Joseph Bottoms), Dr. Alex Durant (Anthony Perkins), the psychic Dr. Kate McCrea (Yvette Mimieux) and journalist Harry Booth (Ernest Borgnine), not to mention their robot V.I.N.C.E.N.T. (Roddy McDowell), are on an exploratory mission when they come across a massive black hole.  They become even more excited when they notice that, in a stationary position on the event horizon, is the USS Cygnus, a ship that was thought lost for two decades.

After almost falling into the hole themselves, the Palomino heads to the Cygnus for repairs.  Onboard they find a ship largely run by robots, with one human still in residence: Dr. Hans Reinhardt (Maximilian Schell), a brilliant theoretical scientist who, after the rest of his crew abandoned ship, decided to stay on and continue his research.  He intends to fly his probe ship into the black hole, protected by an antigravity field, and intends to use the fortuitous arrival of the Palomino crew to observe.  It quickly becomes obvious that Reinhardt is keeping a number of secrets, and nothing on the Cygnus is as it seems.

While the movie has a science fiction setting and many elements of the genre, it is at heart a mad scientist film.  Reinhardt's robot creations and his actions to bring his research to fruition are straight out of any old Universal or Hammer horror film.  To that end, Maximilian Schell plays him in a manner where it is obvious that his sanity is hanging from a thread.  It is the one performance in the movie, except for the robots, that stands out.

As for the machine characters, Maximillian manages to be frightening while just hovering about; its nature is so malignant that it is obvious that Reinhardt already had to be insane when it was designed.  On the other end we have V.I.N.C.E.N.T. who, despite his size, is quite capable of handling things on his own, as is Old B.O.B. (Slim Pickens) despite his battered state. Even the sentries, including their leader Captain S.T.A.R. (Tom McLoughlin) have quite a bit of personality and menace, while again being silent.  If there is one thing the movie got right it was that the majority of robots, unless interfacing directly with humans, have no reason for vocal communication among themselves.

It also gets some zero-gravity physics right, and the only reason the Cygnus has gravity is because of Reinhardt's work.  Some of the early filming in the Palomino, disregarding such things as up or down, is quite good.  Unfortunately, any other scientific accuracy is quickly dashed when Dr. McCrea starts communicating with V.I.N.C.E.N.T. via ESP, and the movie just gives up all attempts to even create a coherent story by the time it reaches the end.

Most of the special effects are pretty good, but there are places where the budget was running out or where reshoots were done and effects only partially finished.  The end shot with the probe approaching a planet and the meteor storm are both excellent examples.  The shot of the meteor rolling through the Cygnus is well done, but the rest of what are supposed to be a bunch of flaming rocks look like nothing less than someone throwing cheese puffs at the ship model.  It's even more ridiculous when considering the fact they shouldn't be flaming at all; there is no atmosphere on the event horizon, thus no reason for any of the rocks to be on fire.  Meteor storms have always been something that frustrated me in old science fiction movies, and by 1979 they should have vanished as a plot device.  The end shot with the probe approaching a planet has the probe flying in a jerky motion, while up until this time all the ships have flown smoothly through the backdrops.

What's left are the action scenes which, without really any human characters to care about, leaves one just hoping the two good robots get out of it alive, or at least receive a good sendoff.  Honestly, there was nothing about any of them that made them interesting, and it is hard to make characters played by actors such as Anthony Perkins and Ernest Borgnine dull.  Still, to its detriment, The Black Hole does it.  Disney was afraid to truly commit to making a film for adults, and so we get bloodless deaths, lifeless action sequences and, since no ending had been arrived at by the time the movie was wrapping up, a jumble of memorable but nonsensical religion-themed scenes to close the whole thing out.

I must say that John Barry's score is one of the highlights (to the point where there is an overture of the soundtrack's themes before the start of the movie - something that had largely been done away with by this time) and that there are a few memorable scenes sprinkled throughout.  Still, the fact that I remember enjoying the comic book tie-in (even if I can't remember the ending of it - I think it was different than the movie, as was the novelization) much more than the movie says volumes.  There is a good story here, even if we are veering more into fantasy territory than science, but neither Disney nor director Gary Nelson had the where-with-all to give it the life it needed.