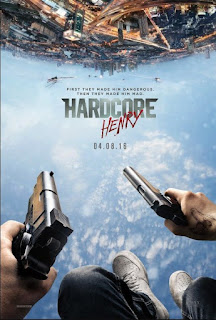 Directors like to try new things sometimes, and often it gets the movie talked about to the point where it overshadows the plot.  For instance, there is a lot going on in Birdman or (The Unexpected Virtue of Ignorance), for better or worse, but director Alejandro G. Iñárritu chose to film the movie as if it were one continuous shot.  It did take some effort to make it all seamless, but largely the ploy was successful.  It is not the only aspect of the movie to spark discussion, but it is a big part of what the movie is.

Hardcore Henry uses the gimmick of filming an action film all from the point of view of the main character.  It's not the first time the idea has come about - a good many of the found footage films practically do the same thing - but instead of trying to find any excuse to have the protagonist carry a camera around for 90 minutes, Hardcore Henry instead gives the audience the thrill of experiencing the action right along with the protagonist.  The main problem is the fact that it can quickly feel like watching a game walkthrough on YouTube.

Henry (Andrey Dementyev, Ilya Naishuller and a number of other stuntmen) wakes up to find he is literally not all there.  Luckily, his wife Estelle (Haley Bennett) is attempting to remedy that, but before Henry can get his voice back the lab is attacked by mercenaries led by a telekinetic oligarch named Akan (Danila Kozlovsky).  Henry escapes with Estelle, but she is soon captured by Akan.  With his batteries running low, Henry is soon aided by Jimmy (Sharlto Copley), who plans on using Henry to put an end to Akan, while Henry agrees to go along with it so he can rescue Estelle.

The plot is there to drive the action, with Henry needing to do a number of fetch quests for Jimmy and get items to level up so that he can eventually fight mobs of faceless henchmen before dealing with Akan and a final twist.  Which, unfortunately, means that the plot is way too much like an open world first-person shooting game, accept that since it's a movie there's no going off to play pool for an hour when bored with a mission.  I really don't know if there was any way that Ilya Naishuller, who is also the movie's writer and director, could have done to get around this. Despite it being a bit too much like a game - even the hookers in the brothel all look alike - Naishuller still tries to set up the action scenes to be as outrageous and over-the-top as possible.

Also to his credit, he keeps the action coming.  This is a grand example of showing instead of telling, with what little information we get about Jimmy and his connection with Akan we get from Henry watching a recording, and we really get nothing on Akan other than he's telekinetic, rich, insane and has dreams of taking over the world.  Mostly the different set pieces are entertaining, but they do get tiresome after awhile, as does watching everything through what is essentially a rigged GoPro camera.