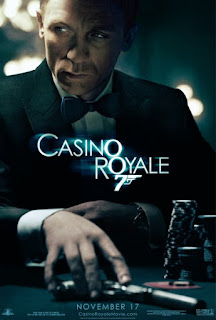 The identity of the actor playing the next James Bond seems to be one of those subjects that can still cause people not to speak with each other after all this time.  Long before the Doctor or Mad Max had different faces, the Bond series changed from Sean Connery, suddenly to George Lazenby, back to Connery and then to Roger Moore.  Each brought their own take to the character, and unfortunately often bore the blame for horrible directorial and studio decisions.  That is why many remember how horrible Moonraker was while forgetting that The Spy Who Loved Me and For Your Eyes Only were some of the best in the series.

Since Moore, we have had Timothy Dalton play the secret agent in two okay films and Pierce Brosnan in one great film, two mediocre ones and another that makes Moonraker almost look like The Godfather in coimparison.  While Pierce Brosnan made a fine Bond, by the time he was playing the character the studio had run out of Ian Fleming novels to, if not get a plot from, at least grab a name for a film.  They had also run out of ideas, something they were more than willing to spend over two hours proving to us.

Well, except for one novel that they had never been able to officially touched.  It had been made as an American TV episode in the 1950s.  It also popped up as a spy parody that gave Skidoo a run for its money as the most disjointed money pit of a movie for the late 1960s.  That novel was Casino Royale.

Elements of the novel had popped up occasionally.  Although the circumstances were different, Bond suddenly losing his wife in On Her Majesty's Secret Service paralleled Vesper Lynd's death at the end of the novel.  Bond's affinity for the game of baccarat also pops up here and there, as well as his strange idea of how to make a martini.  Things changed, and by the time everyone was ready for a new Bond, the rights to the novel were on hand, as well as Daniel Craig to become the newest actor to officially play the role.

James Bond (Craig), on one of his first missions with MI6, causes an international incident when he kills a terrorist on the grounds of a foreign embassy in Madagascar.  M (Judi Dench) is tempted to demote him, but is intrigued with his theory that the terrorist was obtaining explosives for something more complicated than a random attack.  Evidence leads to a millionaire that has been on the radar of several intelligence agencies, Alex Dimitrios (Simon Abkarian).  In an attempt to get information, Bond attempts to seduce Dimitrios's wife Solange (Caterina Murino) with disastrous results.  He is still able to foil Dimitrios's plot, but it becomes obvious that his quarry worked for an even bigger fish going by Le Chiffre (Mads Mikkelsen).

In order to bankrupt Le Chiffre and force him to cooperate with MI6, M teams Bond with Vesper Lynd (Eva Green) and Rene Mathis (Giancarlo Giannini).  They travel to Macedonia in order to enter a game of Texas Hold 'Em against Le Chiffre and other international players, one of whom turns out to be CIA agent Felix Leiter, who makes a deal with Bond to turn Le Chiffre over to American intelligence in exchange for the CIA backing Bond with funds to continue after initially coming out on the losing end.

Of course, not everything works like clockwork.  An African warlord gets wind that Le Chiffre is bankrupt and using the game as a last-ditch attempt to win back his money, while it appears that not everyone working for MI6 is on Bond's side.  To complicate things further, he finds himself truly falling for Vesper.

I was rather curious on how they would update this movie.  The original novel is rooted deep within the Cold War, with Lynd being a KGB agent, Le Chiffre being a free agent, Monte Carlo the location and baccarat the game.  I would say they did a good idea, and the change of the game is forgivable as I can't imagine anyone has really played baccarat professionally since the novel came out.  Poker, on the other hand, has become a televised competitive sport.

Other great decisions that were made was bringing back director Martin Campbell, whose previous credit in the series was Goldeneye, which was Brosnan's first (and best) appearance.  Therefore, the action sequences are quite exciting and tense rather than just plain silly.  In fact, there is more of an effort to make Bond more human and more like he was in the novel.  He also makes plenty of mistakes, since the last major decision that was made was to completely reset the series.  This is Bond at his beginning, mucking things up as much as he solves things.

In large part the main plot, including all the important parts, of the book remains.  The reason I harp on this is because, previously, barely much of the book remained in the movie that was made.  Since the next movie, Quantum of Solace, starts directly from the end of this one, it seems that this time around it was important that the establishing facts were right even if the new movie series intends to take its own path from here.

Criticisms?  Not many, although there is still way too much product placement throughout for my tastes.  Since I didn't get to see it when it came out in 2006, a bit of it makes me chuckle considering how much technology has changed in just the last decade.  In large part, I was satisfied, and happy that once again James Bond movies seem worth seeing again.

Finally, there is Daniel Craig's performance.  While not physically resembling Bond exactly as described, his demeanor is as close as any actor has come since Connery.  I am also glad that they went for an actor that is realistically fit and at a suitable age.