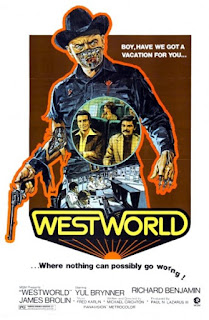 I was a bit confused when I heard that Westworld had become a television show.  Like many older films I remember watching this on Saturday mornings after the cartoons were over, and Yul Brynner's black-clad Gunslinger was always one of the most memorable villains of '70s sci-fi.

So, how in the world were they going to turn Michael Crichton's rather simple tale of a park full of robots suddenly turning on its guests?  A completely new movie would not have surprised me, since Westworld, directed and written by Michael Crichton, in many ways feels like a Jurassic Park dry-run.  But stretching it out in 10 to 13 episode seasons?

Happily the show decided to go on its own path while borrowing a few elements from the movie itself.  But, in the course of watching the show, I realized it was time to check out the film again.

After being introduced through a series of public relations interviews to the happy patrons of Delos, an amusement park featuring "accurate" representations of the Old West, Rome and Medieval Europe for the enjoyment of those willing to pay $1000.00 a day, we are introduced to friends Peter Martin (Richard Benjamin) and John Blane (James Brolin), who themselves are headed for Westworld.  Peter has been before, while John is looking forward to the visit with some feelings of trepidation.

They are taken by hovercraft across the desert to the Delos resort, where they change into period clothing and are driven to their chosen destination to make themselves at home.  While visiting a saloon, a gunslinger (Brynner) bumps into John, causing him to spill his drink.  After the robot does some trash talking, Peter encourages John to challenge and kill him.  He does so, but still has some mixed feelings as the effect is too real for him.  Concerned about accidentally killing a person, Peter encourages John to shoot him, revealing that the guns have heat sensors on them to make sure only robots are killed. Confident that he is causing harm to no one, John goes with Peter to the local brothel to enjoy a night of entertainment with the local women.

While the two men enjoy their vacation, the people behind the operation of the park are starting to get a bit concerned.  The Chief Supervisor (Alan Oppenheimer) has been getting reports of glitches in different robots throughout the park.  Some of his engineers, much to his consternation, think that some sort of transmittable "disease" is somehow being shared by the robots, but further investigation is needed.  Despite the Chief Supervisor's recommendation that the entire park be shut down until the problem can be sorted out, the powers that be will only agree to a compromise of a shut down after the current guests have finished their stay.

The second day in Westworld finds the Gunslinger back in action, and this time confronting Peter in his apartment.  John comes to the rescue, again killing the bad guy and saving his friend.  The two decide to spend their day as outlaws, killing the local sheriff and heading for the hills.  While lounging, a Peter spots a rattlesnake approaching.  His shots miss, and the snake attacks him.  The snake, of course, is also a robot, but is programmed to get shot and not attack.  It is brought back in for examination, and the Chief Supervisor doubles his efforts to get the park closed.  He is even more concerned when, in Medievalworld, a robot named Daphne (Anne Randall) rebuffs the advances of a guest playing a knight (Noman Bartold), even though she is programmed to provide sexual gratification to guests. Things spiral further out of control when the Black Knight (Michael T. Mikler), set up as the main antagonist in the story line for the knight, ends up killing the guest.

Not knowing the other events, the Gunslinger is repair overnight and given an upgrade to make his responses more lifelike.  The friends again encounter him on the way back to their lodgings after a night of enjoying an orchestrated drunken bar fight.  This time, Peter decides to challenge him, but the unexpected happens: the Gunslinger wins the fight, shooting Peter for real and then finishing the job before pursuing John.  Aware that the robots in the park have become dangerous, the Chief Supervisor tries a full reboot, which results in the entire operations staff being locked in the airtight control room with dwindling air and no chance for escape.  Meanwhile, the robots continue on battery power, slaughtering the guests and remaining staff until only John and the Gunslinger remain.

The parallels to Jurassic Park are many.  I don't know if Crichton even had dinosaurs on his mind when he directed this, but the later book was always meant to be made into a movie as well.  Happily, Westworld is significantly different in tone and execution, with Yul Brynner's largely silent Gunslinger (based on, and wearing the same costume, as his character in The Magnificent Seven) is much more frightening than any velociraptor could hope to be - largely because even 45 years later the fear of wear artificial intelligence could lead is still front and center in scientific debates, as well as the television show based on the movie.

The cause itself may have seemed a flight of fancy at the time it was made, but computer viruses are everything from a minor annoyance to a major concern in the modern world.  It's not only a reality, but something we are forced to live with, even if we can't afford a hefty sum to stay at a fantasy playground.  Another thing the movie did right is not mention the exact date.  Although ostensibly supposed to be taking place in 1983, wisely this is never mentioned during the course of the film.  Smart thing, as I doubt many people in the scientific community thought that such advances in robotics would be possible within the decade.

For a science fiction film the theme makes it not so dependent on special effects, but what there are work quite well.  The hovercraft scenes are well-done, and the representation of the Gunslinger's point of view are the first computer graphics committed to film.

The breakdown of the park and the extended chase and showdown between the Gunslinger and John is so memorable that many faults in this movie get overlooked. The bar fight, though typical in Westerns, is here played way too silly, including bird sounds when the guest playing sheriff of Westworld is hit over the head with a bottle.  Peter's death is supposed to come as a shock, and I guess it does in a plot sort of way, but it would mean more if him and John had any personality.  We never really get any connection with any of the guests, including the protagonists, that invests us in what is going to happen to them.

If you enjoy the television show and have never seen the original movie, it is definitely worth it.  Flaws and all (and looking very '70s), the premise is still fresh and Brynner, even with barely any lines, is still fantastic.  You will also notice where some of the show took inspiration and did a few things better: more tension between the initial friends, more of a story ark due to what happened, and a completely different twist on the man in black.  The two go hand-in-hand, even if some of the plot of the show seems to be borrowing even more from the movie's sequel, Futureworld.