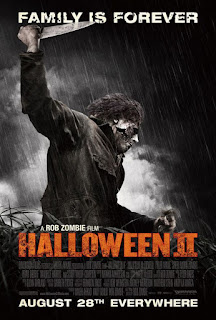 I'm old enough that my introduction to Rob Zombie was through his band White Zombie, followed by his solo albums and his first couple of films, House of 1000 Corpses and The Devil's Rejects.  I consider myself lucky in this respect because I know that Rob Zombie has actual talent as both a musician and a director, even if on either one he tends to get stuck in a rut sometimes.  If I had come across Rob Zombie with his remake of Halloween and this follow-up I doubt I would ever have wanted to see or hear anything from him again.
I am aware that Zombie's first Halloween movie does have its fans, but I am not one of them.  The audience never needed any backstory on Michael other than he killed his sister on Halloween night, broke out of an insane asylum, came back to his hometown of Haddonfield, Illinois and, for whatever purpose known only to him, decided to target a group of girls and their friends.  There was no need for an entire family dynamic, especially one that shoehorned in the usual white trash characters that Zombie likes to make up the Myers family, including his wife Sheri Moon Zombie as Michael's mother.
To his credit he meant for his version to be one movie.  Instead of Michael disappearing like in the original he was shot, point blank, through the head.  It was done, over, and Zombie was hoping he would never have to deal with the Weinsteins again.  Unfortunately for me the movie was filled with Scout Taylor-Compton's screechy non-acting as Laurie Strode and a nu-metal Michael.  Even Malcolm McDowell taking over the role of Dr. Loomis could not make it watchable.  Malek Akkad, unlike his father, was more than happy to see Michael put in his grave (and is working toward that with the current official series), but the Weinsteins weren't.  Zombie's movie made money which, besides getting handsy with actresses, is the only thing that brings the Weinsteins joy.
Michael (Tyler Mane) survives the bullet in the head and kills the two ambulance drivers taking him to the morgue.  Afterward he sees a vision of his mom leading a white horse, an image he remembers from dreams as a child.  He hides away for the remainder of the year as Laurie and her friend Anne (Danielle Harris) recover and Dr. Loomis writes a book about his experiences.  The book exposes something that Sheriff Brackett (Brad Dourif) has tried to keep quiet: Laurie Strode is really Angel Myers, the sister of Michael.
Michael's visions, both of his mom and of his younger self (Chase Wright Vanek), become insistent that he find Angel and "bring her home."  This leads to him returning to Haddonfield to once again attempt to find Laurie and reunite her with the rest of his family.
Supposedly Zombie wanted to make a totally different movie, and a new director's cut was released years later that was closer to his vision.  The Weinsteins cut weeks off the production schedule just as the shoot was beginning, forcing Zombie to abandon a good portion of the script, while the whole thing was shut down when someone made a false report of unsafe working conditions.  Thus, Halloween II was done with constant interference from the producers and on a forever-tightening schedule.  Still, much remained of what Zombie wanted to do, but the theatrical version was cut in a way where it still left it open for another sequel, which never popped up.  Eventually Dimension lost their rights to it, allowing the current series to be made.
The sequel itself was not Zombie's idea, but he came back to make sure that his original vision remained intact.  Since that original vision wasn't that good, the question would be if it could get worse - which is a question I urge never to be asked.  It is worse in every way.  Zombie is a great visual director, and his ideas for films are great.  Occasionally, like with The Devil's Rejects or The Lords of Salem he shows that he can stick to a plot and make a tight, effective film.  Other times, for better or worse, his movies are like his songs - random images thrown together that create a creepy mood, but which ultimately means nothing.  While Halloween attempted to largely stick with John Carpenter and Debra Hill's original story, Halloween II is once again back to random influences cobbled together.
Even with a director's cut that fixes some of Halloween II's problems there is no fixing the fact that Scout Taylor-Compton can't act.  Laurie is about everything anyone hated about a teenager in the 2000s, right down to the tramp stamp and the "catch me outside" attitude, and Taylor-Compton can't even manage to make that believable.  It doesn't help that Zombie really doesn't know how to write female characters.  As much as I think Sheri Moon Zombie, especially in this movie, is only in most of his films due to the fact that his couch is probably uncomfortable, I have an idea that after the Halloween films she may have started filling in her husband on how to better write these characters.  I also think she may have started taking her acting a bit more seriously after this as well.
Danielle Harris is back as Annie Brackett, while there are a number of cameos of older horror actors and actresses strewn throughout.  It doesn't matter since the movie is a nonsensical mess that existed for no other reason than to make Dimension a little extra money and allow Zombie to kill it off.  That he did, and almost killed off his career as a director in the meantime.
Halloween II (2009)
Time: 105 minutes
Starring: Scout Taylor-Compton, Tyler Mane, Danielle Harris, Brad Dourif, Malcolm McDowell
Director: Rob Zombie