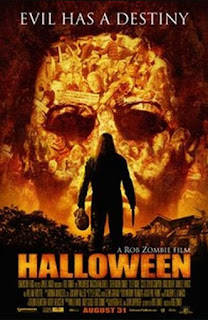 The problem with many of the movies of this time is that, for every Leigh Whannell or Eli Roth that came on the scene you had a bunch of anonymous people working for Michael Bay just trying to squeeze a few more dollars out of tired franchises.  So, with The House of 1000 Corpses and a truly standout horror film in The Devil's Rejects, one would expect that at least Rob Zombie would be able to do what others couldn't and bring new life to an old franchise.

In truth, most of the sequels to Halloween had been pretty awful.  The best one wasn't even a sequel at all, but tried to put the series back on track as being an anthology.  However, critical and fan reaction at the time was negative to the attempt, and Michael Myers became little more than Jason in a different mask.

Rob Zombie at least has some respect for the genre, and with The Devil's Rejects proved that he could make an actual movie rather than an extended tribute.  The problem is that even before Zombie was involved there were thoughts of adding more backstory to Michael.  In the end, we get that, but we also get the original story redone.

Michael Myers (Daeg Faerch) is the put-upon middle kid in the family.  His mother Deborah (Sheri Moon Zombie) is a stripper, his stepfather (William Forsythe) a lazy, abusive redneck and his sister Judith (Hanna Hall) an out-of-control teenager.  The only person in his family that Michael truly loves is his baby sister.

On top of his home life, he is bullied at school and not well-liked by his teachers.  His tendency to torture and kill animals kind of sets him apart as well, and that gets the attention of Dr. Samuel Loomis (Malcolm McDowell), who wants to see if he can help Michael before things escalate.  It's a bit too late, however, as Michael beats one of his bullies to death and then murders his stepfather, his sister and his sister's boyfriend.

Incarcerated at Smith Grove Sanitarium and put under the care of Loomis, Michael at first seems to have no recollection of the murders and has returned to being a normal boy.  As time passes he starts to retreat more and more into himself, designing masks to cut him off from the rest of the world.  After enduring insults from a nurse, he murders her with a fork as his mother and Loomis discuss him after a visit.  This leads to Deborah's suicide.

17 years later Loomis has retired and written a best-selling book about his time treating Michael.  During that time Michael (Tyler Mane) has grown and has waited patiently for his chance to escape.  That happens when a new orderly takes over his care and brings his cousin in to have "fun" with a catatonic female patient that was recently brought in.  They drag her into Michael's room and rape her in front of him, trying to force him to participate.  Instead, he kills everyone and leaves the facility, heading back to his home in Haddonfield.  Loomis is contacted, and he heads there to help the local authorities stop him.

In Haddonfield, Michael's sister was adopted by the Strode family.  Laurie Strode (Scout Taylor-Compton) is an honor student.  So that her friends Lynda (Kristina Klebe) and Annie (Danielle Harris) can spend time with their boyfriends, Laurie agrees to babysit Tommy (Skyler Gisondo) and Annie's charge Lindsey (Jenny Gregg Stewart) on Halloween night.  When she visits Michael's home to drop off some real estate papers he recognizes her as being his sister, and then pursues her, trying to reunite the family.  In doing so he also kills numerous people before kidnapping Laurie.  Loomis shows up at the last minute, but it soon becomes Laurie's job to dispatch the killer.

There are many problems with this version of Halloween.  The first, and most glaring, is Michael speaking - at all.  He becomes silent after he withdraws, but Michael as a child is nice and chatty.  This is something that should never have been done.  The other problem is that, once again, Sheri Moon Zombie gets a role (albeit a small one) just simply because Rob Zombie can't stop casting his wife.  Yes, her acting got much better, and she is great in The Lords of Salem, but here she is her usual screechy self.  It doesn't help that the Myers family is every bad stereotype of a dysfunctional bunch of rednecks.  This would work if this was supposed to be satire, but Zombie is trying to add some serious reasoning behind what Michael becomes.

Daeg Faerch, on the other hand, is great.  Yes, I said Michael is not supposed to talk, but at least they got a good child actor to play him if this is the direction the movie is going in.  Irritating actors playing his family aside, if his name had not been Michael Myers and Zombie had dumped the whole remake idea and went with a whole new film this would have probably been one of his best.  We have a good chunk of the movie already here, and extending it to 90 minutes of a bullied child with a horrible home life getting even with everyone, I think we would be discussing a new horror classic.

Instead, we get the usual asylum cliches, with all-to-brief cameos from Udo Kier, Danny Trejo  and Ken Foree.  Also, at least in the director's cut, an unnecessary and brutal rape scene.

Tyler Mane is just as intimidating as any other actor who has played the part, but the scenes pre-mask with the long hair just look out of place.  Once again we're looking at Rob Zombie video and tattoo art instead of something that makes sense.  The attempt to humanize him a bit works in the scene where he tries to connect with Laurie, but in truth I don't think anyone really wants a humanized Michael.  As evidenced in the recent sequel, there is still no need after all these years to understand anything more than he is a killing machine.

As for the three female leads that reprise the characters from the original, all are annoying and disposable, including Scout Taylor-Compton.  Their dialog is some of the worst in the movie, just behind Sheri Moon Zombie and William Forsythe's.  The reason that it came out sound decent in the original is because female dialog in that was written by Debra Hill, and so it doesn't sound like a guy writing how he thinks teenage girls talk.  The only job Lynda and Annie have in this is to talk slutty and get naked, which is a shame.  I felt for their characters in the first one when they got killed, but couldn't care less in this.

Loomis is even more useless here than he was in the original, despite Malcolm McDowell putting in a good performance as the character.   For some reason, although the line that ended the original movie is in this one as well, things continue for another 15 to 20 minutes afterward instead of just ending like they should.  There was a reason Carpenter's movie didn't keep going on and on.  By trying to do more, Zombie just made the movie more tedious.

I typically like a lot of what Rob Zombie does, but remaking Halloween, while financially successful, was a serious artistic misfire.  I am glad that this reboot of the series was dropped after one sequel, allowing the entire series to be rebooted (and, hopefully, ended) with the current movie.