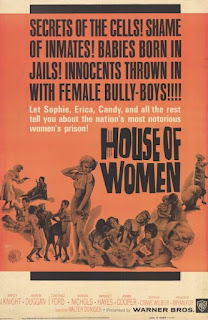 Women in prison movies are sometimes the nastiest that exploitation films can get.  That's why it does come as a surprise that the genre is actually rather old, going back to a time when the Hays Code was still in effect.  Since many of these films thrive on gratuitous nudity, lesbian scenes and outright violence, it is strange to see these types of films from back when little of any of that could make it to the screen.
House of Women is a remake of one of the earliest films in the genre, Caged.  Released in 1950 it told the tale of a young woman who becomes hardened to the realities of life after entering the penal system and is replete with evil guards, butch inmates and all the other trappings.  House of Women even reuses some footage from Caged, but the main hook on this one is what happens to women who go behind bars while they are pregnant.
Erica Hayden (Shirley Knight) is one such woman, sentenced to five years as an accessory to an armed robbery.  She is informed that if she can't find a suitable home for her daughter by the time she turns three then her child will be taken by Welfare Services and put up for adoption.  As that third year approaches Erica is hoping that she may be able to get parole before she loses her daughter permanently.  The situation becomes even more desperate when her child is taken away immediately on its birthday.
To try to ensure her parole Erica gets a job working in the house of Warden Frank Cole (Andrew Duggan) and begins a relationship with him.  While it isn't really a popular move among the other inmates or staff it does afford many of the former additional privileges.  However, whether she reciprocates his feelings or not, his selfishness results in a turn in her fortunes and a hot-headed inmate named Sophie (Constance Ford) to use Erica's situation, as well as a recent tragedy of her own, to take staff members hostage in a bid to get better treatment - and her own revenge.
The idea of prison nurseries is not far off the mark, although to this day it is still a controversial one.  I don't know if they existed in California back in 1962, but currently children born behind bars are given to willing family or friends to raise and, if none are available, placed in the foster care system.  I'm choosing California because, although not stated, everything in House of Women points to the unnamed prison being part of the California penal system.  If anything it works as a good plot device for Erica as it gives her motivation to be a model inmate so that she may be allowed to raise her kid.
This bit of plot convenience is quite useful since, like most women in prison films, the main character can quickly get lost among the ensemble cast.  In addition to Constance Ford playing the hot-headed Sophie there is also Barbara Nichols as Candy Cane, a former stripper and prostitute, who goes on a rant with the parole board over a number of issues that are still relevant today and are finally getting addressed.  It is truly interesting hearing this from 60 years ago when sentiment was largely to lock people up and forget about them.
The other surprise is that the film did get away with some subversive material, such as one inmate's obsession with actor Troy Donahue and her response to another that "she wouldn't know" why the attraction would be there.  Despite being risky for the time the film is rather mild, with the worst the guards doing to the inmates is putting them in solitary.  No whippings, no evil doctors doing electro-shock experiments, no prostituting the inmates, but just a general callousness toward them.  The women do have an ally in an alcoholic prison doctor (Jason Evers), but little sympathy from anyone else.
The acting is surprisingly decent, there are some hilarious lines (intentional or not) and Andrew Duggan plays the warden in a way that would have been considered unprofessional and a bit creepy even back then.  It is a solid b-movie hamstrung by the fact that there is too much in it that happens for plot reasons that just stretches one's attempts believe what is going on, particularly a rather contrived ending.  Still, the emphasis on prison reform and believable characters rather than the more lurid aspects of a women's prison is a bit refreshing.
House of Women (1962)
Time: 85 minutes
Starring: Shirley Knight, Constance Ford, Barbara Nichols, Andrew Duggan, Jason Evers
Directors: Walter Donigan, Crane Wilbur