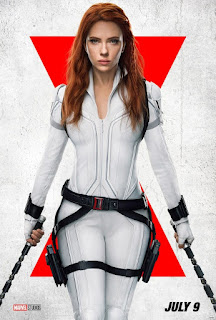 It is time for Phase 4 of the Marvel Cinematic Universe, and we were pretty much warned that this time around they were going to pushing the "girl power."  Unfortunately, that's really about all Marvel and Disney have said.  As a result we finally got the Black Widow standalone film that should have come out during Phase 3 (and is a year late coming out as it is), we're going to get the Lady Thor plotline (which I believe is from the comics) as well a number of other things that will make a number of people yell about SJWs and woke culture while the people making and starring in them say a litany of dumb things that just fan the flames.  All the hullabaloo over what agenda the Marvel films may or may not be pushing is often much more exciting than the movies themselves.
Black Widow was supposed to kick off Phase 4, but the COVID-19 monkey wrench did its job and the movie came out a year later, which meant tie-ins such as Wandavision, The Falcon and the Winter Soldier and Loki ate up most of the attention.  Then, when the movie did come out, Scarlett Johansson sued Disney for breach of contract, as she was supposed to earn a certain amount of money based on box office receipts - which they allegedly sabotaged by streaming it for a premium price, which doesn't count toward that total.  So, while one of the more human Avengers finally got the attention she deserved, the whole thing was undercut but infighting which, once again as I stated, was more exciting than the actual movie.
In 1995 Natasha Romanoff (Johansson) and her "sister" Yelena Belova (Florence Pugh) are put into a training program run by General Dreykov (Ray Winstone).  Romanoff, of course, got out, defected and joined S.H.I.E.L.D. and eventually the Avengers, and was known as the Black Widow.  It turns out the Widows program continued, with Dreykov going into hiding and using chemical manipulation to bend them to his will.  Yelena is one of those, but she breaks free when given an antidote.  While on the run during the events of Captain America: Civil War Natasha receives the remaining vials of the antidote in a shipment with the rest of her stuff from Budapest.
Returning to Hungary she finds Yelena and also finds out about Dreykov, whom Romanoff thought she had killed years before.  Wanting to find his secret hideout she seeks out Alexei (David Harbour), who had posed as Natasha and Yelena's fake father while a sleeper agent in the U.S., and who was also a former Soviet superhero called the Red Guardian.  They find out that the mother in the group, Melina (Rachel Weisz), is still working for Dreykov and may know where he is.  Together they put together a plan to finish off Dreykov and shut down the Widows program.
Marvel once again tries to go the spy film route that worked in Captain America: The Winter Soldier, but instead of the Cold War style thriller director Cate Shortland and screenwriter Eric Pearson go straight into James Bond territory, including a villain bent on world domination hiding in an improbable lair.  There is a scene that hints at what the movie is going for by showing Romanoff sitting back and enjoying Moonraker on her laptop.  Although they got the impossible stunts, the unbelievable luck of not having the entire police force of a city suddenly mobilized once things start happening and the larger-than-life villain from the Bond series, this lacks any of the fun.
Florence Pugh definitely tries to inject some of that, and going forward she may yet shine either on her own or as the new Black Widow in the Avengers.  Johansson, unfortunately, seems there for her paycheck.  This movie really should have been done five years ago, and should have followed Civil War, when she still had some investment in the role.  There is nothing wrong with Shortland's directing, and if she were available at the time I'm sure she would have still done a decent job, but a lot of this movie hinges on performances.  At this point Scarlett Johansson is putting money away for her retirement since she knows the slimy old men in charge of casting will start putting her in grandmother roles the moment she turns 40.  Also, Since Johansson didn't get the paycheck she signed up for it is a good thing she had already died in The Avengers: Endgame, as things would otherwise be quite awkward going forward.
David Harbour is the comic relief, Ray Winstone is evil enough and Rachel Weisz is there.  There are some minor action scenes, with the opening sequence setting up the movie to be much more interesting than it ever gets.  The two major ones - the prison breakout and the finale - are the typical big, bright Marvel spectacles combining some excitement and effects that range from excellent to wondering where the movie's budget went.  Honestly, for a lot of these films, I have no idea why they are still bothering to hire human actors at all and not just doing voice acting.  If most of the movie is going to be some exposition connecting video game cut scenes it makes me wonder why they are still wasting so much money on directors and actors.
In hindsight it was good that Phase 4 kicked off the way it did.  The Falcon and the Winter Soldier did, unfortunately, push some of the political agenda a bit too far for no other reason but to make a few bucks off of racially divisive headlines instead of just going the braver route of, "Here's a black Captain America - deal with it!"  Still, both Wandavision and Loki showed some major promise for the future.  Black Widow is diverting, but really does nothing to make the character any more interesting.  If anything, it does the opposite.
Black Widow (2021)
Time: 134 minutes
Starring: Scarlett Johansson, Florence Pugh, David Harbour, Rachel Weisz, Ray Winstone
Director: Cate Shortland