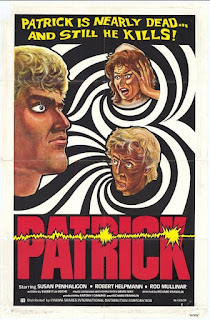 It may be hard to understand now, since Australia (at least to those of us in the United States) seems almost as liberal as Europe when it comes to movies.  There are still a number of countries in Europe - Germany, for instance - where films are heavily cut for violence, and Australia is still known to occasionally get nervous depending on what kind of violence the movies actually contain, but before 1971 the number of homegrown films was low due to heavy censorship, and many of the films from Europe and the U.S. faced being seized by customs and banned all together.
In the early 1970s the Australian Censorship Board began using its own classification system much as the MPAA had started instituting in the late 1960s.  The result was that suddenly Australian directors had a lot more freedom, resulting in what is known as the Australian New Wave.  It also resulted in what was later renamed ozsploitation, which encompassed a number of sex comedies as well as action films, biker films and horror films.  The movie Patrick is one of those movies that straddles the line of exploitation and artistic film making.
Patrick (Robert Thompson) kills his mother (Carole-Ann Aylett) and her lover.  He is injured in the course of the murder and left in a coma where, even though his eyes are open and he occasionally spits, everyone thinks he is brain dead.  When British ex-pat nurse Kathy Jacquard (Susan Penhaligon) is assigned to watch over Patrick as her duty at the Roget Clinic she begins to believe that Patrick may still be truly alive.  Initially she communicates with him simply, but it soon appears that he can use psychokinesis at long distances to do what he wants.
Her findings upset her immediate boss, Matron Cassidy (Julia Blake) and are quickly dismissed by Doctor Roget (Robert Helpmann), the head of the institute.  Kathy tries to enlist the help of an outside doctor named Brian Wright (Bruce Barry), with whom she eventually becomes involved, despite attempts by her ex-husband Ed (Rod Mullinar) to win her back. Brian is reluctant at first but eventually agrees to help her.  Unfortunately, Patrick is the jealous type, and he has fallen for Kathy as well - and won't let anyone else have her.
I expected this movie to be a bit rougher around the edges, but found that it would fit in with any horror film from the UK or U.S. made around the same time.  It's the same slow burn, hinting at the things that Patrick can do before all chaos breaks out.  It raises the tension, playing some scenes early and leaving the audience worried about the fate of certain characters.  Patrick owes a debt to Alfred Hitchccock, with whom director Richard Franklin was friends with, while Everett De Roche's screenplay gives us an interesting bunch of characters.
For its budget it has decent makeup and special effects, and manages to use its resources wisely; Patrick really didn't have the budget of a lot of cheaper films in the genre, and it was trying to be much more ambitious.  However, while I am fine with the structure of horror films in the 1960s and 1970s where I don't expect the big action sequence to come until near the end, Patrick seemed to take quite a bit of time in the middle.  It's already not that long of a movie, but it still could have been trimmed here and there to pick up the pace.
Despite that it is a nice, old-fashioned horror film, this time in a crumbling assisted living home instead of an old mansion and with a comatose maniac instead of an angry ghost.  Susan Penhaligon works well in the her lead role, while Rod Mullinar, who is set up to be kind of a creep in the beginning as Kathy's stalker husband Ed, ends up having a bigger, more nuanced role than expected.  What makes it different is that it doesn't go for the cheap scares and is filmed well, making it feel more like a Peter Weir film in some places, but there is still some gratuitous nudity to shove it into exploitation territory.  It also gets special mention for creating an effectively creepy character that, for the majority of the film, just lies on his back with his eyes open.
Patrick (1978)
Time: 96 minutes
Starring: Susan Penhaligon, Robert Thompson, Rod Mullinar, Bruce Barry, Robert Helpmann, Julia Blake
Director: Richard Franklin