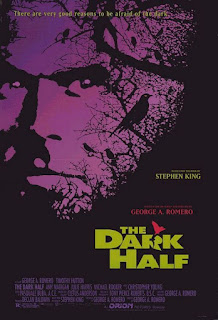 Stephen King and George A. Romero had worked together for quite awhile, and they had worked together well.  Creepshow managed to combine both the shock and the camp of the old EC Comics, while Tales from the Dark Side, which was co-produced by Romero, featured adaptations of King's short stories "The Word Processor of the Gods" and "Sorry, Right Number".  The two remained good friends, so it was only a matter of time before Romero took a swing at adapting a Stephen King novel.
I read The Dark Half a few years after it came out and it introduced me to a word I didn't know at the time but that I've seen come up in interesting ways since: psychopomp.  The idea of birds or other animals carrying souls back and forth between the realms of the living and dead is an intriguing concept, as is the idea of our own minds helping to bring things into existence that never existed before.  The inspiration for The Dark Half came from King's own career, touching on both his own war with chemical dependency as well as his early novels under the name Richard Bachman in which he was able to use early and more atypical story ideas as his fame grew after the popularity of the movie version of Carrie.
Thad Beaumont (Timothy Hutton) is a college professor who, for years, has been trying to get a serious writing career going.  While the books under his own name haven't sold well, those he did under a pseudonym have.  A series of books, written as George Stark, about a criminal anti-hero named Alexis Machine, have sold well enough to allow Thad to indulge in his more highbrow literary pursuits.  The fictional biography of Stark is that of a violent man who has been in and out of prison and turned to writing about his own experiences.
Unfortunately, a man named Fred Clawson (Robert Joy) shows up one day threatening to out Beaumont as the true author of the Machine novels if he is not paid to keep quiet.  Rather than give into blackmail he decides to make the announcement himself, complete with a fake headstone showing that Stark is dead.  Unfortunately, that turns out not to be so, as a number of murders of Beaumont's friends and business associates begin, in which Sheriff Alan Pangborn (Michael Rooker) considers Thad the prime suspect after the killer leaves clear evidence at the scenes.  As it becomes clear that not even the police can protect those around him he becomes concerned - rightfully - that Stark may be coming for his wife (Amy Madigan) and children next.
When I first saw the movie in the theater I was disappointed.  I had liked the book and, being that this was a George A. Romero film, I had expected quite a lot more.  In honesty, it was so long ago that I can't remember why I didn't like it, as it is a well-done, if in some cases too predictable, thriller.  I think it may be because the whole subplot with the sparrows and the transportation of souls works better on paper than it does visually, especially since a number of the birds had to be reproduced with early digital effects in order to make filming possible.  The effects aren't bad - it's such a mass of birds that the individual renderings can't be seen, and the finale is great - but the idea is going to come across as eerie or hilarious depending on who is watching it.
Timothy Hutton's performance can't be faulted.  He's a lot more interesting as George Stark than he is as Beaumont, but in both roles it's a low-key, human approach.  Amy Madigan is also good as his wife Liz, and this is one of those times where I am rolling my eyes at a guy who won't listen to his significant other.  Even before everything happens she knows that Stark himself becomes a bit too real when Beaumont is writing the Machine novels.  I also do give credit to Romero for doing his best at making as accurate a translation as he can of a King novel to the screen; many screenwriters and directors tend to pick and choose, and many times it's because what is in the novel can't legally or logically be brought to life, but the heart of this being the struggle for literary acceptance, the duality of man and the painful march toward sobriety are all realistic and come across well.
I still wouldn't say this is one of the best movies based on a King novel because, although I liked the book, I wouldn't consider it one of his best books either.  It was light years ahead of The Tommyknockers, the one right before it and which was written at a point where he had hit rock bottom.  The Dark Half was his getting sober novel, but it was completely overshadowed by The Wasteland, which was his third Dark Tower novel.  It is too bad Romero didn't get the chance to adapt any of his others, since I am sure he would have done a good job (and, in some cases, a much better one than what we got with many of them).  Still, this is one of the more overlooked King adaptations as well as Romero movies.
The Dark Half (1993)
Time: 122 minutes
Starring: Timothy Hutton, Amy Madigan, Michael Rooker
Director: George A. Romero