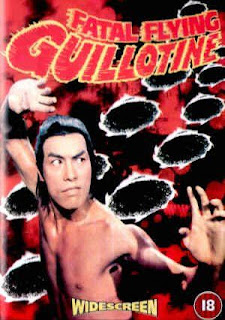 In 1976 a movie came out called Master of the Flying Guillotine.  As of writing this I have not seen that film, but I understand it is supposed to be quite a wild ride, and thus it was quite popular when released.  Popular, as always, means there will be imitations.
Thus we have director Raymond Lui's The Fatal Flying Guillotines.  It's hard to say this is a cheap knockoff when, from all accounts, the original wasn't a big budget production to begin with.  It also made the "guillotines" (referred to in the movie as the Lightning Strike, and not as guillotines) completely different than the flying saw blades of the original.  In the end it doesn't matter since it is just under 90 minutes' worth of continuing fighting with almost no plot at all.
The 4th Prince longs to become king and rule over China, but to do so he must get the ultimate weapon: the Lightning Strike, a weapon consisting of two bell-shaped hoods with saw blades on the outside and inside.  They can be used to slice people or decapitate them and seem to work by some sort of magic.  The old man (Sing Chen) who invented it guards his secret jealously in No Return Valley, and he kills anyone who gets near.
Meanwhile, a young martial arts practitioner (Carter Wong) must obtain a medical almanac to cure his dying mother.  To do so he must defeat three waves of attackers at a Shaolin temple.  He succeeds, only to find out that the book was a forgery.  Turns out the real book was stolen by a rogue monk and given to the 4th Price, who hopes to use it as a bribe to get the old man to join his side.  As both the prince's soldiers and the Shaolin monks try to get the secret of the Lightning Strike the bodies pile up until the final showdown between the boy and the old man.
That is really it.  Fight after fight after fight, with some creative camera work and surprisingly decent choreography, including a number of wire fights.  Trying to follow what plot there is gets frustrating, so it's best to sit back and enjoy this for what it is.  Someone came up with the idea of magical flying bells that cut off people's heads and made sure they were used in the movie as much as possible.  Carter Wong is the strong-jawed hero, Sing Chen hams it up evilly in an old man wig, and whoever is playing the prince does a lot of mugging and evil laughing himself.  The only thing that brings it down is the end, which comes completely out of nowhere and does nothing to really bring any resolution to the story.
The Fatal Flying Guillotines (1977)
Time: 88 minutes
Starring: Carter Wong, Sing Chen
Director: Raymond Lui