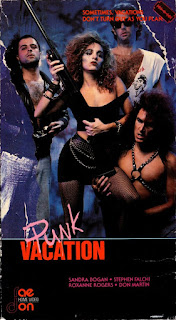 Punk rock, rightfully or not, scared the establishment in the late 1970s and early 1980s.  Keep in mind this establishment was the same one that scared their parents by growing their hair long and jumping on motorcycles and, since the one thing that the media is known for is peddling fear to the public to get ratings, both the Boomers and the generations before them viewed biker gangs as scary.  Punk Vacation hinges on the idea that if punk rock is combined with motorcycles then everyone will be shaking in their boots.
For instance, just look at those nihilistic non-conformists on the cover of the VHS - none of whom appear anywhere in the film, of course, but those guys are going to cause old Mabel to clutch her pearls and go on about "today's youth."  Never mind that the punks taking the vacation are made up of one girl that looks like Siouxsie Sioux, a couple that look like they are Valley Girls that haven't realized it's no longer 1984, a hippy and a bunch of guys that look like disgruntled college students.  There are maybe two in the group that look like punks, including their leader, and their whole mission is not to come down and tear up some small California town, but literally have a vacation away from Los Angeles.
Unfortunately that goes wrong when Billy (Rob Garrison) loses 40 cents in a vending machine and the owner of the diner (Raymond Fusci), rather than just giving him his 40 cents back, threatens him with a shotgun.  Billy returns with the rest of the gang to frighten the old man, but things go wrong and they end up killing him in front of his youngest daughter.  Local police officer Steve Reed (Stephen Fiachi) arrives just as they are fleeing and runs into Billy's bike, knocking himself out in the process.  The gang, led by a woman named Ramrod (Roxanne Rogers), plots to rescue Billy from the hospital and get out of town.
Steve is dating Lisa (Sandra Bogan), the older of the diner owner's girls, and tries to convince her to let the law handle Billy after she nearly kills him in revenge.  Instead, she heads out to the gang's hideout to kill them, but ends up getting captured, leading to Steve and one of his fellow officers having to come to the rescue.  This leads to more deaths and the punks declaring war on the town, while Sheriff Virgil (Louis Waldon) rounds up the local gun club to take them out.
The movie looks like it was filmed on 16mm, and there seems to be some debate on when it came out, whether 1987 or 1990.  When it did it went directly to video, but the absolute strangeness of it has caused it to become a bit of a cult classic, particularly for those who try to find entertainment in awful, incompetent films.  Recently I have been watching a lot Red Letter Media's Best of the Worst episodes and Punk Vacation is the type of the movie that would fit their format - although it is much more identifiable as a movie despite a lot of the strange choices made for the narrative.  There has been some criticism saying that it seems like entire plot points were cut out, but I don't see that; the story is a simple revenge plot that doesn't exactly come to a satisfactory end, and the editing is bad, but the story is consistent and easy to follow.
This is director Stanley Lewis's only credit of any type, and the screenplay was written by Lance Smith and Harvey Richelson, who also have little else to their names.  The acting is generally terrible throughout, there is a driving scene that is obviously two of the crew members rocking the car back and forth in a dark garage and, though some of the makeup effects are decent, it was obvious there wasn't enough money in the budget for squibs.  One way I am often able to gauge a movie's budget, and unfortunately often its quality, is the use of a free library "hospital" sound effect - the exact same one used for Queensrÿche's Operation: Mindcrime album, specifically.  There are a few Full Moon films that use it that are good despite the red flag, but this is typical of where it will turn up.
The tone in the movie is all over the place, with counterculture social satire injected in places and obviously ridiculous lines that are meant, at times, to be self-referential and clever.  The movie will then switch right back to being serious before boomeranging once again to a scene that attempts to be intentionally funny.  The whole Patton/MacArthur discussion between Steve and the Sheriff is a perfect example, where a discussion of how Steve screwed up by responding late to an alarm turns into a satire on blind patriotism.  In a movie that has "punk" in the title I can kind of see where they were going, but it comes from and goes nowhere.
At least it's not a boring film but, even when it comes to bad films, it really isn't anything too memorable.  It tries hard in a few places to be more than it is but, in the end, it comes down to the same story of a beleaguered town turning against the outsiders that have laid siege to it.  It just doesn't have anywhere near the satisfaction in the ending and it feels like getting to that point just wasn't worth the trip.
Punk Vacation (1987)
Time: 88 minutes
Starring: Sandra Bogan, Stephen Fiachi, Roxanne Rogers
Director: Stanley Lewis