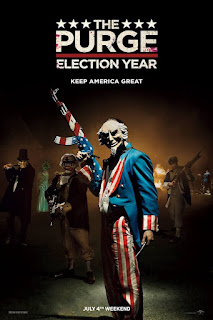 The Purge series is that rare one, at least with the first three, where the movies improved as they went along.  Once the original movie proved financially successful writer/director James DeMonaco was able to make The Purge: Anarchy, which showed much more of what audiences were expecting from The Purge itself.  It places us on the streets where we see what is actually happening on Purge Night, as well as the socioeconomic and racial issues behind it.  By the end it is clear that not everyone relishes a night to "release the beast" and there are some revolutionary movements that are beginning to happen.
The Purge: Election Year continues in that vein as the New Founding Fathers of America face a threat of their own: Senator Charlie Roan (Elizabeth Mitchell), a woman whose family was murdered during one of the Purges and has made it her life goal to end the tradition.  To do so she is running for President against the NFFA's candidate, Minister Edwidge Owens (Kyle Secor), who is a mouthpiece for the shadow government that is running the United States at this point.  After 25 years most of the public has become used to the night, and the U.S. has even become a destination for others from around the world that want to experience the night for themselves.
Leader Caleb Warrens (Raymond J. Barry), the head of the NFFA, is not about to allow his power slip away from him, and arranges for a group of mercenaries led by Earl Danzinger (Terry Serpico) to kidnap Roan.  What he doesn't account for is the resourcefulness of Leo Grimes (Frank Grillo), the former police sergeant from The Purge: Anarchy, who is now Roan's chief of security.  When her safehouse is compromised he is forced to take to the streets and attempt to keep her alive, and he soon receives the aid of deli owner Joe Dixon (Mykelti Williamson) and his workers Marcos (Joseph Julien Sora) and Laney (Betty Gabriel), the latter who drives a triage van each Purge Night.  The group soon encounters Dante Bishop (Edwin Hodge), the homeless man given shelter by the Sandins in The Purge, now leading a revolutionary group.  Unfortunately, their plans may do more to harm than help Roan's chances for the presidency.
The Purge: Election Year came out in 2016, and James DeMonaco is definitely no fan of the Republican party.  Although the world of the Purge is an alternate timeline it is obvious that he also thinks little of his fellow Americans as well.  What he is a fan of, as left-wing as he is, is money, and so are his bosses.  Each Purge film, including this one, made more than the last.  To his credit I don't think he ever presented these movies as being more than exploitation films, and in this he seeks to carry on the story from the last movie as well as exploit the heated divide going into the real-life 2016 election.  Unfortunately, it was backlash in many ways against subtle real-world election year tactics like this that led to a Trump victory and almost pushed us into something similar to the NFFA's America.
His overt political stance does not keep The Purge: Election Year from being an enjoyable action film.  Frank Grillo did a great job in the previous one and he returns to do the same here, while Elizabeth Mitchell does what she can in a role where she, unfortunately, is often relegated to playing the usual damsel in distress.  Mykelti Williamson and Betty Gabriel are the standouts this time around, although DeMonaco really needs to get a black friend to write dialogue for characters of color.  A lot of Joe's lines are unfortunately clunky and embarrassing.  The bad guys, of course, are all cult-like and psychotic, something I would normally complain about as propaganda if, unfortunately, we weren't seeing this unfold before our eyes in our reality.
The only thing DeMonaco seems to hate more than conservatives is Millennials.  While it has a great payoff, the Schoolgirls are presented in such a snotty, entitled way that one would think every bad stereotype of them "killing" (pun intended) everything had been rolled into one annoying package.  Sure, it is supposed to be 2040, long after the actual Millennials are grandparents, but they hop out of a sedan covered in Christmas lights with "Party in the U.S.A." blasting and the most stereotypical entitled attitude possible.  Regardless, it's a great scene, as are many of the creative, strange and violent ways many people handle Purge Night.
I may be taking much of this a lot more seriously than DeMonaco intends, especially since all three of the original movies - especially the second and third - are just b-movie action films.  That said, it's good that at least two delivered what they promised, which is a better track record than most.
The Purge: Election Year (2016)
Time: 108 minutes
Starring: Frank Grillo, Elizabeth Mitchell, Mykelti Williamson, Betty Gabriel, Joseph Julien Sora
Director: James DeMonaco