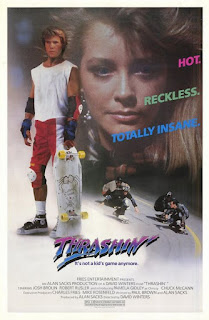 If one watches a number of '80s films they will notice a pattern.  There will be the hero, who may or may not be a nerd, who falls in love with the girlfriend or sister of the bad guy.  After a number of attempts (in some cases homicidal) from the rival the hero hits rock bottom but, wounded and battered, comes back to beat the bad guy in some big competition, be it a downhill skiing challenge, a karate tournament, a dance-off or a skateboarding competition.
There's not really much to spoil in a movie like Thrashin'.  Director David Winters was part of the Broadway cast of West Side Story, which itself was based on Romeo and Juliet.  That is basically what we have here, except for the Ramp Locals and the Daggers filling in for the Jets and Sharks.  It has become a cult classic among the skateboarding crowd but, for those of us who were never part of it (and could never go a few feet without falling off), it just seems like another in a long line of similar films from the time period.
Cory Webster (Josh Brolin) comes down to Los Angeles to participate in a couple of skateboarding competitions: one involving a pool, the other a grueling 20-mile downhill race called the L.A. Massacre.  The latter has a $1000.00 grand prize as well as the chance to design skateboards for legendary manufacturer Sam Flood (Chuck McCann).  He has practiced and is raring to go when he meets a girl named Chrissy (Pamela Gidley).  The two hit it off but, unfortunately, she is the sister of a rival skateboarder named Tommy Hook (Robert Rusler), who forbids Chrissy to date Cory.
The two start seeing each other behind Hook's back.  When he finds out he and the rest of his gang, called the Daggers, try to beat up Cory and go as far as destroying his friends' homebuilt ramp.  After a "jousting" competition, Cory is left wounded and doubts he will be able to complete the L.A. Massacre, and Chrissy has had enough and leaves town.  Despite his injuries he decides to still enter the competition, while Chrissy has second thoughts about returning home to Indiana.
The acting in this is wooden, and there is little of the Josh Brolin that would pop up later in his career.  David Winters actually wanted Johnny Depp in the role of Cory, but at the time producer Alan Baskin refused.  In a reversal, Josh Brolin passed on doing Winters's television show 21 Jump Street, which then gave Depp his big break.  The reason I mention the acting, though, is because as bad as Brolin and Rusler are it makes one wonder why they didn't just cast some of the skateboarding community that has cameos in the film.  I can't really imagine them being any worse.
This was Pamela Gidley's first movie, and she is one of the brighter spots.  She went on, along with Sherilyn Fenn (who plays Hook's girlfriend Velvet), to have a long career in movies and television, and both worked with David Lynch.  Cory's friends are a lot more interesting than him and, since they aren't required to do any heavy lifting for the acting, actually come across as guys that like to hang out with each other.  Unfortunately the Daggers seem contrived.  I was really hoping for more of The Warriors on skateboards rather than West Side Story, but occasionally we get some decent moments, particularly with the joust.
What can't be faulted, and is probably the reason a lot of people in the skating community love this movie, is the way that it is filmed.  There are a lot of point-of-view shots and, when the guys (or their stunt doubles) are on the boards, things liven up.  When it comes to the big competitions that end these films the L.A. Massacre is one of the better, and probably was difficult to film in the days before digital cameras.  This is where the movie truly comes to life and, if the plot had been left out and we just followed a bunch of skaters through local competitions, this would be a much better movie.  Winters knew how to film his subject and it is just too bad there are less scenes of them skating around downtown L.A. and more drama.
The music in this deserves a mention as it features a performance by Red Hot Chili Peppers a few years before they began to break nationally (and, since this is PG-13, they are wearing more than just socks), while the soundtrack features a title track by Meat Loaf of all people.  Unfortunately, it was at the time when Meat Loaf was at rock bottom, and understandably the theme hasn't been released officially, either on the soundtrack album or on any Meat Loaf compilation.  It does feature some songs by hardcore acts like Fear and the Circle Jerks, but is largely made up of what was the top-40 sound of the day.  I was truly expecting more of the hardcore bands, especially since most of the characters wear shirts for SST Records and numerous punk bands - even a Meat Puppets t-shirt, which as a Phoenix native I appreciate - because they were often favored in the scene.
It's about everything '80s one could expect, from plot to music to fashions.  I guess if one was part of the California skateboarding community then it would have a lot more meaning as a nostalgia film than it does for an outsider like myself.  Even so, the skateboarding scenes are great, but I'm glad a lot of the main cast went on to do much better work than this, as did the director.
Thrashin' (1986)
Time: 93 minutes
Starring: Josh Brolin, Robert Rusler, Pamela Gidley
Director: David Winters