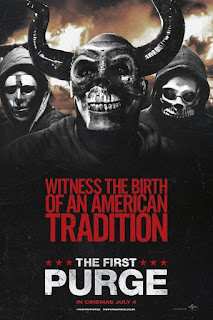 The Purge: Election Year was supposed to originally be completely different.  Rather than moving forward with the story it was supposed to take a step back and show us the beginnings of the Purge right after the New Founding Fathers of America had come into power.  That changed when Frank Grillo, who had played Leo Barnes in The Purge: Anarchy, agreed to reprise his role.  Since it would only make sense to continue the story from there, Election Year took place seven years after the events of Anarchy and gave us the story of a presidential candidate attempting to put an end to the Purge.  Since a prequel had already been planned it made sense to explore the origins of the night after seeing what may have been its demise.
The First Purge takes us back to the time in our alternate history when the NFFA, a third party playing on public discontent over both Republicans and Democrats, managed to take power in both houses of Congress as well as the Presidency.  During a time of economic collapse worse than what our world experienced in 2008, the NFFA comes to power in 2014 and then President Bracken (Ian Blackman) is elected in 2016.  In 2017 an experiment is set up on Staten Island to test a theory by a psychologist (Marisa Tomei) who believes that letting out violent behavior can be cathartic for the majority of the population.
Nya (Lex Scott Davis), a local social activist, sees a more sinister goal behind the Purge.  She is concerned that it is a way to encourage the lower classes to kill themselves off so that the government won't have to take care of them.  Meanwhile her ex-boyfriend Dmitri (Y'lan Noel) is concerned that his rivals will try to move in on his drug business, while Nya's brother Isaiah (Joivan Wade) is hoping to use the night to get back at a junkie named Skeletor (Rotimi Paul) that embarrassed him.  As the night doesn't exactly go as the NFFA planned it at first, they soon send in mercenaries to impersonate right-wing hate groups to stir up the population.
Although James DeMonaco wrote this the directing duties went to Gerard McMurray.  Where in many cases DeMonaco portrayed a lot of the violence that was happening during the Purge in a dreamlike fashion McMurray frames it more realistically.  He is also a person of color, and it seems that he may have had some hand in adjusting parts of DeMonaco's script, as it doesn't seem so much that black characters were written by a white guy.  That may not be a problem in a number of cases, but DeMonaco's previous dialogue for his black characters was awkward and provided a lot of unintentional humor in the previous films.
This is important because the majority of the cast is black and Latin and the core reason for the Purge, despite what the NFFA tell the American public, was always about killing off the poor.  If there is some criticism it's that the villains, as they have been in the past, are one-dimensional caricatures of evil right-wing government types.  However, most of the "evil white people" in the movie are not even Americans, but foreign mercenaries brought in so violence could be perpetrated upon the people of Staten Island and the NFFA could blame domestic terrorist groups and claim their hands were clean.
Structurally it is like Anarchy and Election Year, where the protagonists eventually wind through their own stories to finally meet and work together, and where pains are taken to make sure everyone ends up on the streets no matter where they originally planned to spend the night.  Repetitive it may be, but it works.  I also appreciate that McMurray films action in a more traditional way and not in the quick-cut fashion many directors favor for their movies.  The performances as usual are solid, with Y'lan Noel and Lex Scott Davis understandably the most memorable.
It's not perfect.  The movie is a bit too predictable, given that the outcome of the experiment is already known, and there are too many other minor characters that are little more than cannon fodder.  That said the way people behave, at least of the beginning of The First Purge, largely mirror my thoughts on how things would go in an experiment of this sort if it wasn't tampered with.  Without the tampering, however, there would be no tension and many of the reasons for the Purge set up in the previous films would fall flat.  It is rather contrived, but so is the whole series, and like the the best of the previous films that doesn't matter.  It delivers what it promises and, once again, made quite a bit of money even after a two-year absence and a movie that generally tied things up.
The First Purge (2018)
Time: 97 minutes
Starring: Y'lan Noel, Lex Scott Davis, Joivan Wade, Marisa Tomei
Director: Gerard McMurray