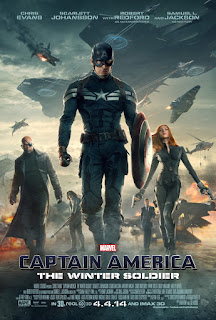 In my opinion, Captain America: The First Avenger was the best of the pre-Avengers Marvel movies.  I thought Thor was pretty but hollow and didn't swoon over Iron Man like many did (I actually liked Iron Man 2 better).  There was something about a solid origin story and the ability to fit Captain America into the modern world that appealed to me.  I was surprised since this has always been one of the corniest of old-time superheroes.

Happily, The Winter Soldier lives up to the expectations established by the first movie.  Set two years after the events in The Avengers, and meant to bridge the gap between that movie and the recent Age of Ultron, it was wisely infused with a number of classic political thriller elements rather than the rote superhero plot.  There is plenty of heroing happening, but in large part the main characters are in a vulnerable position throughout rather than invincible justice machines.

Steve Rogers (Chris Evans) is adapting to the modern world after being frozen for over 70 years, but is dismayed when even Nick Fury (Samuel L. Jackson) appears to be using S.H.I.E.L.D. for a secret project called Insight, which would use a new generation of helicarriers linked to satellites to spy on people around the world.  An algorithm would be used to determine if they may be a threat so they can be dealt with.  Rogers is understandably upset about what he considers a betrayal of the values that he and his fellows fought for in World War II.

After speaking with his mentor Alexander Pierce (Robert Redford), Fury himself begins to second-guess the project and decides that further study is needed.  Shortly after making this decision he is attacked on his way through Washington, D.C., managing to barely escape a mysterious mechanical-armed assassin (Sebastian Stan) and make it back to Rogers's apartment.  Mortally wounded, Fury tells Rogers not to trust anyone.

With the help of Natasha Romanoff (Scarlett Johansson), Rogers discovers that S.H.I.E.L.D. has been infiltrated over the years by a resurrected version of Hydra, and they intend to not use the helicarriers for surveillance, but rather to eliminate millions of people that they feel are a threat to the new world order.  Enlisting the help of Iraqi war veteran Sam Wilson (Anthony Mackie), it is up to them to stop Hydra's plan.  The only problem is, the assassin is a legendary figure known as the Winter Soldier, responsible for a number of deaths over the last 70 years, and possibly connected to Captain America's past.  He is also the Captain's match (and possible superior) in every way.

It seems more and more big budget films are trying to tout how much of the movie is practical effects, and directors Anthony and Joe Russo tried to do things as traditional as they could.  It is surprising that the movie turned out as well as it did, since Hollywood has recently been throwing small-time directors like the Russos into large-scale projects, with predictably disastrous results.  This time around they lucked on someone who knew what they were doing.

I know that a lot of comic book fans may be getting upset that these movies are making compromises to bring in those of us who don't really follow comics themselves, but again I see this as being an advantage.  Typical superhero comics tend to be on the silly side when you get down to it, but work when in the concept of what is more than just story but also meant to be a form of art.  Films are a form of art as well, and largely as removed from reality as comics, but needing to have some sort of cord attaching the film to the body of reality while it astral travels into the fantastic is important.  The infiltration of S.H.I.E.L.D. by Hydra is reflected in many of the best thrillers from the past, from The Manchurian Candidate to Three Days of the Condor (a major reason for Redford being among the cast, it must be said).