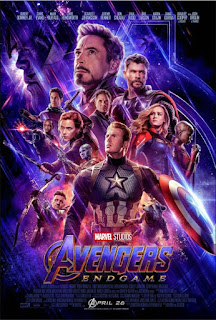 From its start with Iron Man, hedging their bets on a movie starring an actor making a comeback after a series of bad decisions, the Marvel Cinematic Universe grew to three phases and 22 films over a course of 11 years.  It survived films of varying quality, fan backlash, a transfer of studios and the fact that many of the characters were owned by different entities when it came to bringing them to the silver screen.  In the end, though the movies involved outrageous budgets, there cannot be said to be an outright failure (money-wise) with any of the bunch, despite similar films barely making back their advertising costs.

It all came down to Avengers: Endgame to wrap everything up.  The question was, how?  Avengers: Infinity War ended with half the organic population (save plants, I assume) of the universe snapped out of existence.  Thanos (Josh Brolin) won, retired to a life of farming, while in his eyes it was the job of those who were left to make things better than they were before.  It wasn't an ending that audiences expected, as in most cases the big bad guy (or small bad guy) either got what they deserved or started to have a change of heart.  Instead we were left with the aftermath of a universe in which the bad guy won.  While Endgame was made concurrently with Infinity War, instead of immediately wrapping things up we were treated to one movie, Ant-Man and the Wasp, which took place right before the events of Infinity War and was seemingly not connected, as well as Captain Marvel, in which the title character was hinted at being the one that would save the day down the line.

We start Endgame with seeing Hawkeye (Jeremy Renner) left alone after his family suddenly turns to dust, and Tony Stark (Robert Downey Jr.) adrift in space with Nebula (Karen Gillan) and contemplating his death as the oxygen runs out.  Due to the beacon Nick Fury (Samuel L. Jackson) set off just before his death, Carol Danvers (Brie Larson) is able to find Stark and Nebula in barely enough time and bring them back to Earth.  The remaining Avengers, led by Black Widow (Scarlett Johansson), assemble once more and find Thanos on his farm.  They find out he destroyed the Infinity Stones, so the chance of reversing the Snap have vanished.  Thor (Chris Hemsworth) kills Thanos and walks away.

Five years later finds little in the universe happening other than world after world still dealing with the aftermath.  By random accident Scott Lang (Paul Rudd), who was trapped in the Quantum Realm when the Snap happened, is brought back to the current version of Earth.  Distressed by what he has found, he brings a hail-Mary plan to the Avengers: use the Quantum Realm as a conduit for time travel so everyone can go back to when the Stones were still in existence, collect them and, in the present time, bring everyone back that was removed by Thanos.  At first Stark is reluctant, although Bruce Banner (Mark Ruffalo), who is now combined with his Hulk alter-ego, gives it a go.  Tony figures out how to safely do it, and off everyone goes to collect them.

Problem is, when Nebula arrives on the planet Morag shortly before the events in The Guardians of the Galaxy, she forms a link with her earlier self which alerts Thanos to the Avengers' plan.

I went into this movie largely spoiler-free.  I knew about fat Thor, and new that at some point Captain America (Chris Evans) was going to wield Mjolnir.  I knew at least one death that would happen, but not how.  I just knew that, inevitably, the Avengers would succeed in bringing everyone back.  I was just wondering what the how would be.  Carol Danvers is so overpowered a character that I expected her to be used as a deus ex machina and, while she does show up to help in the final battle (and to rescue Tony Stark and Nebula at the beginning), her fight with Thanos is less impressive than when he is challenged by Scarlet Witch (Elizabeth Olsen).  It's made clear that Danvers is important to the larger picture, but thank goodness screenwriters Christopher Markus and Stephen McFeely didn't go the easy route.

Instead, I was surprised that Ant-Man was central to the proceedings.  Honestly, I didn't expect him to show up again until the entire situation with Thanos was finished, with Hank Pym (Michael Douglas) and Hope Van Dyne (Evangeline Lilly) showing up to rescue him in a later movie after being unsnapped.  Instead, without him being accidentally trapped, the key of undoing everything would never have presented itself.

The other major surprise is that directors Anthony and Joe Russo don't waste a bit of the three-hour running time.  In fact, they took pains to make sure the pacing of the movie was what it should be.  It also could have been three hours of cameos and, while many occur, largely the Russos avoid shoehorning characters in.  Everyone shows up for the battle at the end, so even if they only spend a few moments on screen they are at least serving some sort of function.  I must also say for once that the battle is worth it; too often the final villain battles in Marvel movies are anti-climactic, given how much they are built up and what the stakes supposedly are.  Thanos was not a push-over in Infinity War, and he is definitely not here either.

I was also happy that most of the computer effects served the scene rather than looking as much like cartoons as they have in past movies.  The effects serve the story and, as much as I hate to admit it, using digital costumes in many ways looks less ridiculous than practical ones would have been.  The impressive parts are the more subtle ones, like emaciating Tony Stark and de-aging some of the characters, which they are starting to get the hang of doing without them looking like uncanny ghosts.  I do have some problems with Smart Hulk, but I have had problems with almost every digital incarnation of Hulk they have come up with so far.

Being the finale of the story that began with Iron Man, I feel satisfied.  I really don't find anything too bad to say about it.  It is a big effects movie that was surrounded by a bubble of hype, but unlike most movies of its type it delivered what was promised, giving us the best of what the previous movies have had to offer while largely avoiding the worst of it.  The more and more it sounds like phase four of the MCU is going to start sinking into pandering to the Chinese market and social messaging the more I think that Endgame is also going to be the last gasp of the classic MCU.  The series didn't really start coalescing until Thanos started surfacing in the background as the big baddie and, unless they've got a Celestial more interesting out there than Ego for the next group to battle, it remains to be seen if a combination movie and event like this one will come about again.