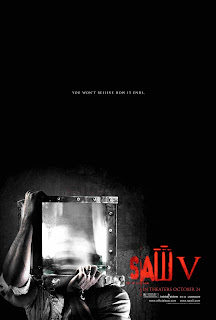 Darren Lynn Bousman bowed out of the Saw series after Saw IV, so for the first time since the original movie was directed by James Wan and Leigh Whannell someone other than him was in the director's chair. This man was David Hackl, and he had been the production designer for the Saw films that Bousman had helmed.  This fifth entry in the series was his debut film and would also be the one movie that anyone would remember by him.  Unfortunately for Hackl, although it is not as bad as some would make it out to be, this is the nadir of the series.
To bring everything up to date, Saw IV's events largely happened along the same timeline, and in the same place, as Saw III.  Agent Peter Strahm (Scott Patterson), while pursuing Jigsaw, stumbles upon Jeff (Angus Macfayden) after Jeff has killed John Kramer (Tobin Bell).  Seeing him as a threat Strahm shoots him, but then finds himself locked in the room with Kramer's body and the rest.  At the same time Agent Rigg (Lyriq Bent) failed his test by barging through the door, thus resulting in the death of Detective Matthews (Donnie Wahlberg) and the reveal that Detective Mark Hoffman (Costas Mandylor) is Jigsaw's second accomplice.
At the start of Saw V, we find Strahm escaping only to be caught in one of Hoffman's traps and barely survive.  Meanwhile, Hoffman rescues Jeff's daughter and comes out looking like a hero.  Strahm, after he recovers, is taken off the Jigsaw case by his boss Erickson (Mark Rolston), but continues to look into it, suspecting that Hoffman just too conveniently escaped when everyone else died.  His digging leads to flashbacks showing how Hoffman and Kramer met, as well as Hoffman's involvement in setting up the events we saw in the previous films.
Meanwhile Hoffman has another five participants lined up who, because of Jigsaw's crimes being well-known by this time, start trying to figure out how to survive their game.  Hoffman has also figured out that the best way to deflect any suspicion that others may have about him is to pass it off on another, and Strahm makes the perfect target.
While I do not find any of the Saw movies I have seen horrible, I can see why this one pretty much gets dismissed.  Despite the fact it has some good traps (the one inspired by "The Pit and the Pendulum", for instance) and we get a lot more background rather than a quick summary at the end to make the new twist make sense, Saw V really goes nowhere with the story.  There is an interesting part where Jill (Betsy Russell), John's ex-wife, receives a mysterious box in his will, and there are hints that it does have something to do with bits and pieces of what is happening, but whatever it is just vanishes like smoke.  It is understandable that it may play out in the larger plot, but the rule still stands - if one shows a gun in the first act, that gun needs to be used by the last act.  That doesn't happen with Jill's mystery box.
The main plot of this movie is the cat-and-mouse between Strahm and Hoffman.  It is also quite weak, as not much happens between the two, and other than throwing other people off the scent Hoffman's counter-game against Strahm doesn't do much.  Strahm, in fact, was the only one on the scent, with Erickson not even having Hoffman on his radar.  Strahm's behavior was getting him close to being fired as it was, so in reality he was never a threat.  The five people facing a series of traps is interesting, but seems completely disconnected from the rest of the film.  There is no overwhelming lesson that dovetails with anything else happening, so they are largely just there to add some traps and death to what would have otherwise largely been a cinematic clip show.
Despite the fact they have nothing to do with the main plot of this film, the five victims in Hoffman's trap should.  This should have been the movie, as what's going with them, especially with foreknowledge of Jigsaw's methods, making their way through a macabre obstacle course is actually quite exciting.  There is also the pendulum trap as well as the first meeting between Kramer and Hoffman, which is filled with tension and which allows Costas Mandylor and Tobin Bell to play off of each other without a lot of posturing and grandstanding.  Sure, by now the series is pushing believability to its limits and any close examination would make this house of cards tumble, but the elements that did make the other movies so enjoyable are still here - just, unfortunately, hidden too deep or used poorly.
A lot of this comes down to writers Patrick Melton and Marcus Dunston, who at this point seem to have just pushed this out because the studio was demanding it and David Hackl seems little more than a director-for-hire.  About the only new thing he adds is not making the movie seem like someone accidentally exposed it on the way to developing.  Happily the Melton and Dunston would find a way to start making things better again before the series drew to a close.
Saw V (2008)
Time: 92 minutes
Starring: Costas Mandylor, Scott Patterson, Tobin Bell, Betsy Russell, Julie Benz, Meagan Good, Carlo Rota, Greg Bryk, Laura Golden
Direcot: David Hackl