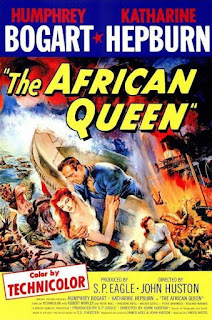 Only John Huston could have convinced a major movie studio to let him film on location in Africa in 1951, despite all the logistical problems.  Having Humphrey Bogart and Katharine Hepburn as the leads pretty much guaranteed a hefty return for the investment, provided that everyone came back okay.  Lots of apocryphal stories have come about - some the usual colonial myths about cannibalism, which peers said Huston made up out of whole cloth - but one thing that was true is that almost everyone got sick, largely from contaminated water.
Huston had originally planned on filming in Uganda, but decided instead to film along the Belgian Congo.  Bogart hated the humidity, bugs and pretty much everything, while Hepburn loved it until the inevitable dysentery set in.  While filming in some countries in Africa still presents a challenge, at the time many places were still under colonial rule or had just, often violently, shaken it off. Despite European powers saying they were bringing civilization, typically that meant only to the parts where Europeans settled.  They provided the bare necessities - a few roads and a train to move goods, and a few European style buildings for plantation owners and mining barons to lounge around in.  Otherwise, despite all the talk of "civilizing the natives," practically nothing was done for them - including making sure their water was drinkable, as a good part of the movie's cast and crew discovered.
Some of this attitude is reflected in the movie.  Early on we meet Rose Sayer (Hepburn) and her brother (Robert Morley), both of them Methodist missionaries bringing the word of God to a small village.  Charlie Allnutt (Bogart) runs a boat that largely handles bringing supplies to a nearby mine, but also serves to carry the local mail.  He is also the one to bring word that war has broken out in Europe and, as the Sayers are British and living in a German part of Africa, they are no longer safe.  In a rare bit of honesty about colonial attitudes in the early 20th century the Germans, who could not have cared less about the natives otherwise, burn the village and draft the men to be soldiers.
After Rose's brother dies she decides to leave with Allnutt and see about holding out some place until they can get to British-held territory.  However, once Rose finds out that Allnut is carrying blasting gel and other components that can be used to make a bomb, she comes up with the idea of making homemade torpedoes to sink the Louisa, the German ship that patrols the lake the river empties into, so that the area could be opened to a British attack.  The major obstacle is the river itself.  After a certain point it is not navigable, particularly for an old boat like The African Queen.
In addition to being an adventure story this is also a romance, as Charlie and Rose fall for each other along the way.  This caused a few concerns as the Hays Code was still in full effect and the idea of an unmarried couple cohabitating on a boat ruffled some feathers.  This prompted one of many changes to the original story written by C.S. Forester.  Supposedly he was not upset about the alterations as he tended to think many of them made the story better.  Indeed it is amazing how well the movie turned out considering that there was no finished script and a lot of it came from just trying to accommodate the footage that was shot.
With the difficulties everyone faced, and with Bogie's wife Lauren Bacall sitting in the wings making sure he behaved, it is a wonder that The African Queen was as successful as it is.  After the initial odd-couple moments Bogart and Hepburn have an easy chemistry and Huston, along with cinematographer Jack Cardiff, got the best out of the location shooting.  Humphrey Bogart won his only Oscar for his performance and the movie has largely stood the test of time - probably because most of it depends on the performances of the two leads and it doesn't have any of those uncomfortable "attacked by savages" moments many films like this would include.  In the end it's a movie about love coming out of facing adversity rather than another take on Heart of Darkness.
The African Queen (1951)
Time: 105 minutes
Starring: Humphrey Bogart, Katharine Hepburn
Director: John Huston