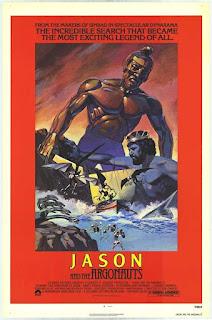 I sometimes wonder how it would have been to be sitting in a theater in 1963, watching on the big screen where one might have seen giant bugs or guys in monster suits tromping around, and suddenly see something spectacularly new.  I can especially imagine being a kid sitting in the front row as Triton rises from the sea to provide safe passage for Jason and his crew.  For me it has always been one of the most memorable scenes from Jason and the Argonauts, which says a lot since this has some of Ray Harryhausen's best effects work, including the living bronze statue Talos, the Hydra and the skeleton army that arises from its teeth.
This was a time when Hercules and Jason films were popular in Italy, and mostly churned out as cheaply as possible.  Predictably, Hercules is in this, played by Nigel Green as producer Charles Schneer didn't want him looking like a body builder, but the movie largely deals with Jason's journey to find the Golden Fleece.  It's been a story I loved since a kid when I read adaptations of the original Greek myths and the movie has always been one of my favorites.  Even more than the later Harryhausen movies, which technically have more refinement of his techniques, I think this one works best of the modern viewer wanting to see what all the hype was about.
King Pelias (Douglas Wilmer) is assured of victory in battle against the king of Thessaly, but is told by his oracle that even though Zeus (Niall MacGinnis) has assured his victory that he will not retain the throne.  Rather, he will be overthrown by one of the king's children.  Rather than accept this gift from Zeus he tries to alter his future, thus angering Hera (Honor Blackman) when he desecrates her temple.  Though Zeus isn't happy with her interfering he agrees to let her help Jason (Todd Armstrong) a certain number of times when it comes his time to oppose Pelias.
As an adult Jason rescues Pelias upon his return to Thessaly, not knowing who the other truly is, and in order to free his people and bring his kingdom back to its former glory departs with a crew of Greece's best heroes to travel to the realm of Colchis, on the other side of the world, and to bring the Golden Fleece, the magical skin and wool of a ram, back to his homeland.  The journey along the way is fraught with danger, as Pelias's son Acastus (Gary Raymond) is part of the crew and the Gods are not always supportive.  Also, King Aeetes (Jack Gwillim), the ruler of Colchis, is not excited about departing with the Fleece.  Jason soon comes to find aid in Medea (Nancy Kovak), a priestess of the goddess Hecate, but escaping from Colchis alive may prove harder than the journey itself.
It is pretty much a straightforward retelling even if there are some edits, changes and rearranging, just like in Harryhausen's Sinbad films.  In the beginning this actually was supposed to be another Sinbad film, with the two famous sailors joining together for a grand adventure, but eventually became focused on Jason's search for the Fleece.  In addition to Triton's appearance Patrick Troughton makes a brief appearance as Phineas, the man the Gods tortured by having a feast laid out only to have it be whisked away by harpies.  The harpies are memorable, but are the least of his effects.  One of the best is the Hydra, an alteration for the original story in which a dragon guarded the fleece (the Hydra was one of Hercules's tasks to destroy and lived in a swamp).  The legend that its teeth could be sewn to bring forth an army are kept, thus resulting in the final battle between Jason, two of his crew and a group of living skeletons.
Todd Armstrong appears here in what I believe is his own starring role and, unfortunately, like most of the heroes in Harryhausen's movies he's not as memorable as some of the villains and other heroes he meets.  Don't know if this is really Armstrong's fault as he is dubbed by another actor, a practice I never understood in many movies from the 1960s except in case where accents made them incomprehensible.  At least Armstrong seems to know basic fencing, as Kerwin Mathews from The 7th Voyage of Sinbad seemed like he barely knew how to even fake a swordfight.  This was a bit more important this time around due to the intricacies of filming the skeleton scene, but I just wish more of the good guys were memorable.  Patrick Troughton in his small role of Phineas is, and Douglas Wilmer as the evil king Pelias is as well, but both are barely in the movie.
It doesn't matter since Jason and the Argonauts knows what it is doing and does it well.  It is still extremely European in its feel, but the effects and the cinematography mark it as being above the rote sword-and-sandal epics of the time.  Rather this captures the spirit of the myth that it is based upon and the feel as a child of learning these old tales.  It is Harryhausen's favorite film that he has done, and for once I have to agree with the person behind the work.
Jason and the Argonauts (1963)
Time: 104 minutes
Starring: Todd Armstrong, Nancy Kovak, Honor Blackman, Douglas Wilmer, Jack Gwillim, Gary Raymond
Director: Don Chaffey