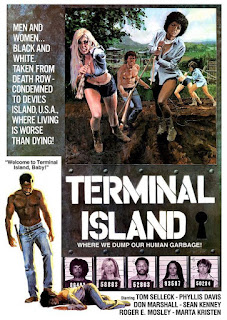 The saying is that there is nothing new under the sun.  While sticking prisoners on an island and letting them fight it out is something often discussed once a few beers are down and the entire way to run the world becomes suddenly clear, the idea of following through may seem quite familiar to those who enjoyed Escape from New York, suffered through Escape from L.A. and, though they're not prisoners, are familiar with the manga and the movie called Battle Royale.  While not the most efficient way of handling criminals in real life the idea of just letting them have their own place to hash things out is prime b-movie fodder.
It should be no surprise that the idea popped up as a '70s exploitation film.  The film is called Terminal Island, and it takes place in a United States where the Supreme Court has outlawed the death penalty.  California has decided get around this by declaring those convicted of first degree murder legally dead and shipping them off to a place called San Bruno Island, otherwise known as Terminal Island.  To make sure they stay put the sea around it is mined and there is only one safe means of ingress.  They are provided with basic supplies to help them survive, but otherwise they are on their own.
We are introduced to the main cast by a news team putting together a story about Terminal Island and its latest arrival, Carmen Simms (Ena Hartman). She is brought back to the main settlement by Dr. Norman Milford (Tom Selleck) where she finds that she and the other women in the camp are both the unpaid labor and the sex slaves of the men.  The camp is ruled by serial killer Bobby (Sean Kenney) and his right-hand man Monk (Roger E. Mosley).
Carmen at first chaffs at her new existence but soon begins to think there is no escape - that is, until a number of men exiled by Bobby show up and rescue them.  With the help of Lee Phillips (Marta Kristen) they are able to make gunpowder, and with Carmen's help they also make curare-coated darts and, with a little cunning, hope to end Bobby's reign.
There isn't a whole lot of story here and, because director Stephanie Rothman chopped out quite a bit of the more exploitative scenes from the script, this is surprisingly not as nasty as the whole premise would make it seem.  There is nudity in some places, there is a lot of dialogue about how the women are being treated, but whereas most of these films would have used that for titillation Rothman made sure that that the movie wasn't using rape for humor or disturbing fulfillment fantasies.
While Carmen is initially set up to the be the main character this turns out to be more of an ensemble, with the two standouts being Don Marshall as A.J., the leader of the exile band, and Randy Boone as Easy.  Of the women Lee is the most interesting, although Phyllis Davis as Joy Lang gets the most attention because of full-frontal outtakes not used in the film that ended up in an '80s video compilation of nude scenes and also on the internet.  I can definitely say that Davis has one of the better scenes when she gets some revenge on Dylan (Clyde Ventura) for ignoring the rules of consent.
There are some interesting concepts here, with questions about the validity of euthanasia thrown in as well as some feminist subtext.  The problem is that Rothman was trying to deal with what is essentially a quick and cheap exploitation film and trying to polish it as much as she could.  No matter what she was saddled with the same budget, and most of that went to providing an explosive finale.  No matter what Rothman wanted to do with the movie it still ended up being just light drive-in fair, most interesting for the fact that Tom Selleck and Roger Mosley, both of whom would find fame later on with the television show Magnum P.I.
Terminal Island (1973)
Time: 88 minutes
Starring: Ena Hartman, Don Marshall, Phyllis Davis, Marta Kristen, Barbara Leigh, Randy Boone, Tom Selleck, Sean Kenney, Roger E. Mosley
Director: Stephanie Rothman