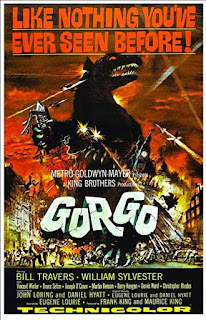 Gorgo promises that it is like "nothing you have ever seen before."  The millions who have seen Godzilla, The Beast from 20,000 Fathoms and even The Giant Behemoth may dispute that fact.  Not surprising, since Gorgo shares something in common with two of those movies: director Eugène Lourié.  His main thing was working on giant monster films, often with effects experts like Ray Harryhausen and Willis H. O'Brien.
This time around instead of stop motion Lourié jumps into suitmation, the style developed by Eiji Tsubaraya to get around the fact that stop motion was expensive and Japan really didn't have an expert in the field.  Instead they made a suit, originally of a cement compound but later a polymer, that an actor would be encased in and then stomp around a bunch of miniature buildings and cars.  When done right it was (and still is) a way of making a convincing monster movie without breaking the bank.  When done badly it ends up being a poorly-made North Korean propaganda film.  Happily the effects team on Gorgo did know what they were doing, and the effects rival Mothra, which was released the same year.
Joe Ryan (Bill Travers) and Sam Slade (William Sylvester) are partners on a salvage boat.  After the ship is damaged during a strange storm at sea they sail into the Irish port of Nara Island for repairs and fresh water.  The repairs are denied by the harbormaster (Christopher Rhodes), but he agrees to provide them supplies.  While there Joe and Sam discover a large reptilian creature in the waters which is threatening local fisherman.  They offer to capture it, and manage to do so, but also gain a stowaway in orphan boy Sean (Vincent Winter), who believes it is a local sea serpent of legend and should remain where it is.
The sailors take it back to London and sell it to circus owner Dorkin (Martin Benson) who names the animal Gorgo and puts it on display for the public.  However, Prof. Hendricks (Joseph O'Conor), who has been studying the creature, realizes that it is a juvenile, theorizing that an adult would be about 200 feet tall.  That fear is realized when Gorgo's mom shows up near Nara Island and, looking for her son, heads for London for a mother and child reunion.
While there are many obvious similarities to Godzilla and many other monster movies of the time, Gorgo is kind of unique.  It is not just that the creatures are family rather than meeting in the city to battle, but it is because of the build-up to the action.  Many of these films have brief bits of action as the creatures fight or wreck the city, surrounded by endless conversations.  Gorgo, in contrast, handles all the human drama in the first couple thirds of the movie, and most of the last third is his mother tearing London apart.  The scene in the poster is actually in the movie, and the action doesn't disappoint.  The Gorgo suit is an improvement on Godzilla's, keeping in mind that at the time Japan's big guy hadn't graced the screen since 1955.  Unlike many kaiju there is no fire-breathing or other strange effects, just height and strength, so a lot of the equipment that pops in to make unwanted appearances in many of the cheaper films.
While it is definitely not one of those - rewrites and reshoots made this one of the more expensive British monster films - it still has some of the trappings of films that are cheaper, including relying a bit to much on stock footage in places.  Short as the movie is, it was said that Eugène Lourié made his own private cut, removing the stock footage and just keeping what was shot for the film.  In fact, he didn't even want guns in it at all, figuring that modern military weapons could still kill a 200-foot-monster in reality.  He was overridden by King Brothers who wanted as much flash and bang as they could in the film, even though they already had two monsters.
It is one of those rare movies where suitmation was used outside of Asia, and used well and not just to be cheap or make a parody of kaiju films.  It was also a good choice since this is the type of film it was made for; stop motion would not have made this any better, but on the contrary would have severely cut down the time the monsters would have been on screen.  I am also sure that American distributors were happy not have to bring in a team to dub this one.
Gorgo (1961)
Time: 78 minutes
Starring: Bill Travers, William Sylvester, Vincent Winter, Joseph O'Conor, Martin Benson
Director: Eugène Lourié