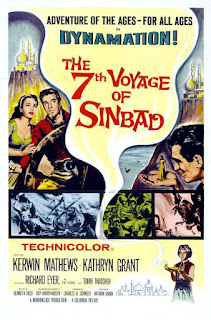 Producer Charles Schneer and stop motion effects expert Ray Harryhausen decided that they had gone as far as they wanted with invasion from space movies after making 20 Million Miles to Earth.  It was time to move on, both technically and literally, to something else.  By this point they had made enough to do color films and, as Harryhausen's skills (and technology itself) improved, to do an effects-filled film like no other.
Still, it wasn't like there was an unlimited budget, so one of the most important things to do was find a property that many people are familiar with and that was not going to cost anything.  In this case, it's the tales of Sinbad the Sailer, a 9th Century adventurer that appeared in later versions of One Thousand and One Nights, first showing up in the 17th century.  The stories, independent of One Thousand and One Nights, tell a seven-voyage cycle of Sinbad often losing his wealth, going to sea, getting shipwrecked and, through ingenuity and divine providence, surviving to once again bring a treasure back to Baghdad.
Despite being called The 7th Voyage of Sinbad this movie takes elements from many different Sinbad stories (the Roc is from the fifth story, the cyclops from the third) with other Middle Eastern and Greek legends combined with characters and situations created by Harryhausen and screenwriter Ken Kolb.  The mixture is clearly as as authentic as much of the "Exotica" music that came out in the 1950s, and ultimately just as fun.
We find Sinbad (Kerwin Mathews) adrift with his crew, transporting his fiancé Princess Parisa (Kathryn Grant) back to Baghdad.  The marriage is both a desired and a political one, meant to ally Baghdad and the state of Chandra.  Low on fresh water and supplies they land on the island of Colossa, where they take on what they need, but also find out that it is inhabited by giant one-eyed creatures called Cyclops.  They also find that it is home to Sokurah (Torin Thatcher), a magician of questionable morals that has possession of a magical lamp from which he can call a genie (Richard Eyer) to do his bidding.
Sokurah loses the lamp to the Cyclops as the crew flees the island and tries to convince Sinbad to return.  The latter, however, is anxious to get to Baghdad, and once there Sokurah also requests a ship of his own from the Caliph (Alec Mango), who refuses.  To force the matter Sokurah shrinks Princess Parisa and then tells Sinbad the only way to return her to normal size is to return to Colossa so he can prepare a potion, made partially from the eggshell of a giant Roc that lives on the island.  They do as he says but it soon becomes apparent that Sokurah's interests lie only with himself.
The story itself is rather slight, and most of the dialogue sounds like someone trying their best to make it sound like people are talking in an old-fashioned, "Eastern" manner.  The movie was made in Spain, and as far as I know no one, especially the main actors, were of Middle Eastern origin.  This is not out of the ordinary for the 1950s, but it is also unfair to call it brownface; no one particularly wears any face paint (Kerwin Matthews and Kathryn Grant are white as they come), and many don't even try to do Arabic accents.  Torin Thatcher's accent, if anything, sounds more Slavic.  Still, despite this, and the fact that Eastern stereotypes abound, there is no real attempt to portray the culture in a negative light or even in a patronizing one.  Probably everything that Harryhausen knew about this time period and about Islamic Arabic culture was from the source material, and he tried to at least stay faithful to the spirit of the tales.
We get a number of his creations, including a snake woman, the cyclops, a dragon and both a baby roc and a quite displeased parent version.  The Dynamation logo is big and bold, both on the poster and in the opening credits, and was a method that Harryhausen developed so that his creations could exist in a three-dimension space in the film, with live action going on in front and behind of the animations.  Modern digital prints contrast this much more than the older prints did, showing how the animated and matte portions where of lower resolution, which unfortunately may lessen the enjoyment for those brought up on modern special effects.  Still, it is a marvel what he was able to achieve at the time, and on only a modest budget.
Nathan Juran is the director, continuing to work with Harryhausen after 20 Million Miles to Earth, and would work with him again on First Men in the Moon.  Like most directors Harryhausen and Schneer hired he's unobtrusive, competently directing the live action scenes but not really showing any special flare or style, as that was Harryhausen's job.  The actors are there much the same way, with Kerwin Matthews playing the handsome hero, Kathryn Grant the beautiful princess and Torin Thatcher the villain.  They all stay within their boxes and do what they are supposed to do to move the story along.  They are also not given anything too demanding as it is expected that audiences, especially younger ones, are going to care less about the humans and more about the monsters.
That doesn't keep this from being a great adventure story for both young and old.  It also spawned to other Sinbad movies from Harryhausen, and also began a period of him working with film score composer Bernard Hermann, who provides one of his best and most recognizable soundtracks for this movie.  In many ways it does show its age, but it is still a fun movie to sit back and enjoy.
The 7th Voyage of Sinbad (1958)
Time: 88 minutes
Starring: Kerwin Matthews, Kathryn Grant, Torin Thatcher, Richard Eyer
Director: Nathan Juran