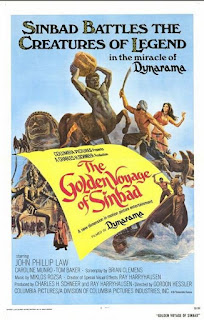 Although Ray Harryhausen originally made a name for himself animating creatures and alien invaders in the early 1950s his popularity really soared when he began making a number of adventure films based on mythological heroes.  The first was the Middle Eastern sailor and adventurer Sinbad, the central figure in a cycle of heroic tales based in the 9th century Abassid Dynasty of Baghdad.  The 7th Voyage of Sinbad was loosely based on those stories, featuring a giant cyclops, rocs, a dragon and all sorts of great effects.
Harryhausen returned to the world of Sinbad in 1974 with The Golden Voyage of Sinbad, this time giving us a largely original story and, in typical mythical fashion, treating the new story not as a sequel but just as another story featuring the same character.  His original Dynamation technique had by this time evolved into Dynarama, and the original movie had received a recent revival.  While this may not have the same feeling of whimsy as the original did it is still a great fantasy adventure film.
Sinbad (John Phillip Law) and his crew are sailing in unknown waters when a strange creature drops a golden medallion on the boat.  Against his crews' wishes he decides to keep it.  He soon finds out that it belongs to a magician named Koura (Tom Baker) who tries to take it from him soon after Sinbad lands in the kingdom of Moravia.  He manages to escape Koura and meets with Moravia's Grand Vizier (Douglas Wilmer), who has another one of the pieces of the gold tablet the medallion belongs to.  Sinbad soon figures out it's a nautical chart that points to an island that is the last surviving piece of the continent of Lemuria.
Unfortunately, Koura uses his creatures to gather the information and makes plans to follow and overtake Sinbad on his voyage.  Meanwhile, two new crewmembers are added: a slave girl named Margiana (Caroline Munro), who bears a strange symbol that Sinbad saw in a dream, and the layabout son of a merchant, Haroun (Kurt Christian).  They sail for the island with the Vizier and soon discover the location of the third part, and the reason why Koura is so desperate to get his hands on all three: his magic drains his youth, and by placing the pieces in the Fountain of Destiny he hopes to restore his vitality and make himself invincible, thus ruling over Moravia.
John Phillip Law is one of those actors with a handsome face that fits a hero role requiring some physical action but not necessarily an overwhelming amount of acting talent.  Much like Kerwin Mathews in The 7th Voyage of Sinbad he is meant to just look the part, although I think the writing on this one is better and Law does a good job.  Although the effects are spectacular as usual Golden Voyage doesn't depend on them solely as there is a pretty solid, if well-worn, story.  I like the pursuit at sea, and the intentional humor with Haroun works.  Caroline Munro isn't given a whole lot to do, but she's in it pretty much for one reason (or two, possibly).
The most memorable character, of course, is Koura.  Tom Baker seems to be having a lot of fun being bad, and it is enjoyable seeing him as such since he is almost solely known for playing the fourth regeneration of the Doctor in the long-running BBC program Doctor Who.  His portrayal of Koura largely is what clenched what would be his career-defining role.
Then, of course, there are the effects.  Not only is the stop motion great here, but so are the matte paintings and environments, especially the giant mountain carvings as the ships sail into Lemuria.  Since Harryhausen has had another 15 years to hone his craft by the time he made this movie his creatures are looking more and more lifelike and are better able to look like they are interacting with the actors.  Humans, when captured by the monsters, also look less like blobs of clay.  This time around we have a ship's masthead coming to life, Sinbad fighting a living statue of Kali and a battle between a one-eyed centaur and a griffin.
Like the first this is still fun for all ages.  Just keep in mind that a G-rated film in 1974 is pretty much the equivalent of a PG, and sometimes PG-13 film, now.  Special effects were definitely changing at the time, as well as were the movies people were going to see, but Ray Harryhausen still managed to present a wonderful fantasy film that has aged quite well.
The Golden Voyage of Sinbad (1974)
Time: 105 minutes
Starring: John Phillip Law, Caroline Munro, Douglas Wilmer, Tom Baker
Director: Gordon Hessler