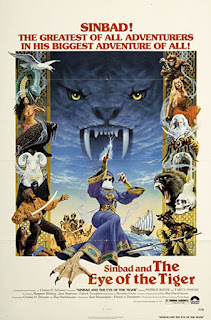 1977 is an interesting year for cinema.  Two of the biggest hits were Smokey and the Bandit, which celebrated American automobile culture and also pretty much invented the modern action comedy, and the other was Star Wars, which started a long-running franchise and pretty much changed how science fiction and fantasy movies were made.  One of the other films released that same year was Sinbad and the Eye of the Tiger, an example of old school fantasy filmmaking and Ray Harryhausen's penultimate film before he retired.
Ironically, the gameboard scene in Star Wars featured stop motion from effects artists that Harryhausen had influenced, and Industrial Light and Magic would improve on his techniques for The Empire Strikes Back.  I say ironic because, by the time The Clash of the Titans was released, it looked quaint and old fashioned compared to what George Lucas and Steven Spielberg were turning out.  I saw both Star Wars and Sinbad and the Eye of the Tiger in the same theater back when they initially came out and, though I'm sure I was subjected to re-releases of Disney cartoons the same year and Sinbad was double-billed with some movie about Atlantis, these are still the only two films I have clear memories of seeing at the time.  Both were perfect for the imagination of a child.
Prince Kassim (Damien Thomas) is being crowned Khalifa when suddenly he is changed into a baboon by black magic.  When Sinbad (Patrick Wayne) arrives to ask him for the hand of his sister, Princess Farah (Jayne Seymour), he finds that the city is under the control of Queen Zenobia (Margaret Whiting).  Zenobia is determined that her son Rafi (Kurt Christian) is to become the next Khalifa and has changed Kassim into a baboon to avoid his ascension.
Sinbad finds out that the only person that may know how to reverse Zenobia's spell is a man named Melanthius (Patrick Troughton) who, along with his daughter Dione (Taryn Power), join Sinbad on a journey to Hyperborea to take Kassim to the Shrine of the Four Elements where the spell can be reversed.  Zenobia and Rafi, along with their clockwork man-bull called Minaton, are in hot pursuit.
Minaton is one of Ray Harryhausen's most famous creations and, in some scenes, was played by Peter Mayhew, who would play Chewbacca in Star Wars.  Throughout the baboon is stop motion, as no one was stupid enough to bring a real baboon on set and try to train it.  Although not as flashy as the cyclops, Minaton and the Troglodyte that appears in this movie, the baboon is one of the more intricate and lifelike of Harryhausen's creatures, largely because he was working with something from reality instead of fantasy.  Although Sinbad and the Eye of the Tiger does seem like a movie from a completely different decade than Star Wars, it was pretty much the culmination of everything Harryhausen had worked on.  While The Clash of the Titans may have been his last and featured a number of his famous creations there wasn't too much of a change in the four years between the films in technique.
The problem is, as previously stated, that the movie itself seems older than it really is.  The 7th Voyage of Sinbad felt fresh, The Golden Voyage of Sinbad felt like it was an interesting throwback, while this one, except for some brief scenes involving Jane Seymour and Taryn Power skinny dipping and sunbathing nude, seems like something that should have come out in the early 1960s.  At times it also seems, when it comes to pacing and effects, way too close to the Italian movies that tried to copy many of these adventure films.
Then, unfortunately, there is Patrick Wayne in the lead.  While John Wayne could at least fake it when given the right role and had a presence, Patrick is dull and reads lines as if he has someone standing behind the other actor with a cue card.  John Phillip Law was originally supposed to come back and reprise the role, which would have been welcome.  Even though he's not the greatest actor ever, he seemed comfortable with the role.  Wayne's lack of acting skills stands out in the early parts of the movie but, thankfully, as things go on, Margaret Whiting's campy performance as Zenobia livens things up while Patrick Troughton is eventually given most of the heavy lifting when it comes to carrying the film.  Sinbad gets to sail the ship, do some fighting and order his crew around, but Melanthius gets to deal with a shrunk-down Zenobia and initially fight a giant hornet.
That said the movie is still a treat for fans of Harryhausen and, although the Sinbad movies do not follow a story of any sort, I would still recommend seeing the others first as the pacing is better and so are the leads.  What Sinbad and the Eye of the Tiger presents is a last gasp of an old style of movie making that had been fading for years.  It is strange seeing a glimpse of old Hollywood at a time when all sorts of new movies had changed the seen so much.
Sinbad and the Eye of the Tiger (1977)
Time: 113 minutes
Starring: Patrick Wayne, Jane Seymour, Patrick Troughton, Taryn Power, Margaret Whiting
Director: Sam Wanamaker