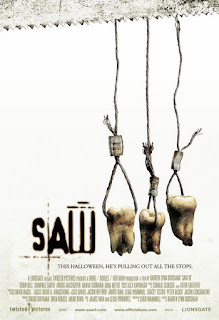 Darren Lynn Bousman's directorial debut was Saw II, and it was a bit of luck since it was a script he had been shopping around for years and had never been meant as a sequel to Saw.  In fact, there never was supposed to be a sequel in the first place, as it was something that Leigh Whannell and James Wan came up with to film on the cheap so that they would at least get noticed.  The first movie became a massive hit, and the second one as well.  That posed a bit of a problem since, upon the sequel doing excellent box office, a third movie was commissioned.
Bousman really did not intend to return, but eventually he, Whannell and Wan decided to go ahead with it themselves after the death of producer Greg Hoffmann, who had been helpful in getting the first two made.  Where the first one had been largely two guys trapped in a room due to the machinations of Jigsaw (Tobin Bell) to force them into a confrontation, the second involved the son of Detective Matthews (Donnie Wahlberg), a crooked cop, with a number of people that his father had framed in a house filled with poison gas.  Both original movies had left their protagonists' fates up in the air - although Adam's (Leigh Whannell) corpse is discovered toward the end of Saw II - and the second movie introduced John Kramer's plans for continuing his games after his death.  Amanda (Shawnee Smith), the woman who escaped from the reverse bear trap device in the first movie, went on to be come his apprentice.
Matthews is still missing and Detective Kerry (Dina Meyer) is shocked to find the Jigsaw murders happening once again.  Only this time there is a twist - instead of the usual hope of escape it appears that the victim was given no chance at redemption.  Kerry soon discovers in person why this is when she becomes one of Jigsaw's subjects.  Meanwhile, as his cancer has become worse, Kramer has Amanda doing what she can to keep him alive, but it has come to the point where he needs more help than she can provide.  He wants to stay alive to see the conclusion of a game involving Jeff (Angus Macfadyen), a man who has been consumed with vengeance since his son was killed by a drunk driver.
In order to stay alive he has Amanda kidnap Lynn Denlon (Bahar Soomekh), a doctor who had once coldly informed Kramer of his impending death.  She is fitted with a collar that will fire a series of shotgun shells at her head if at any point Kramer dies before Jeff finishes his trial.  As always, what appears to be a simple game becomes more complex, as Kramer is once again testing not only the obvious people but others that need it as well.
I thought Saw II owed a bit to Cube with having the multiple people trying to escape and was somewhat hampered by Wahlberg's overacting and some strange directing choices by Bousman, particularly in the beginning.  While the former is no longer really a concern (both Whannell and Wahlberg show up in flashbacks so that we learn what ultimately happened to their characters), Bousman is.  I know that he may have been going for a grainy, filthy look to make the movie even more uncomfortable, but it just looks like he overexposed the film for "artistic" reasons.  In addition there are still a lot of quick cuts that are there for exposition purposes, but really don't tell us anything we don't already know.
What is improved this time around is the story.  Saw II was a solid sequel, but this feels like more of a true sequel to the first one, and that is most likely because this was actually written as such instead of just trying to manipulate another script to fit the story.  Although Bousman is directing, Whannell and Wan are back to writing the script, and it does give us some explanation on how Kramer was able to lay motionless in a pool of blood for hours the first time around.  It is also interesting to hear him called out for the pretentious garbage that he spouts when the difference between him and an actual murderer is semantics.
Because of the story (and I really don't mind the twist-upon-twist stuff at the end - I think that's more of a hallmark of Saw movies than the torture devices) this is almost the equal of the first, and really would be if someone else was directing.  Surprisingly, Bousman found his niche with Repo! The Genetic Opera, although he is returning to the Saw series with the upcoming Spiral.  Since his career after Repo! hasn't been fantastic I'm hoping that he has learned to restrain himself.  Still, this stands out as both a tense horror film and a worthy sequel to the original, and this time purposely sets the stage for the next movie since, at this point, it was pretty obvious the franchise wasn't ending any time soon.
Saw III (2006)
Time: 108 minutes
Starring: Tobin Bell, Shawnee Smith, Bahar Soomekh, Angus Macfadyen
Director: Darren Lynn Bousman