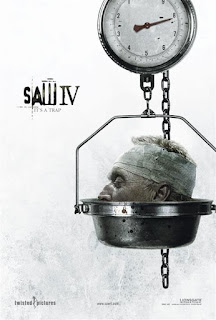 If the Saw series did anything different it was killing its main villain off after just three movies.  Yes, technically, Jason Voorhees was only around in pre-zombie form for parts two through four, but for him to avenge his mother he had to be lurking in the background somewhere in the first movie.  In Saw John Kramer was dying from the very beginning, and in the third installment his demise was made quite final - emphasized by the fact that number four starts with Kramer's autopsy.
To untangle the ever evolving Gordian Knot that is the Saw saga, Kramer (Tobin Bell) had taken on an apprentice - Amanda (Shawnee Smith) - to continue his "teaching" after he passed away.  Unfortunately, she decided that she was going to do things her own way and, instead of teaching a lesson, straight up used the devices and methods of Jigsaw to murder people.  Kramer becomes wise to what she is doing and tests her while also running Jeff Denlon (Angus Macfadyen) through a one of his games.  Jeff turns out to be the husband of Lynn (Bahar Soomekh), the nurse Amanda kidnaped to keep Kramer alive during this final test.  As usual everyone fails spectacularly, and pretty much everyone dies.
This fourth entry begins with Lt. Mark Hoffman (Costas Mandylor) and his team finding Detective Kerry's (Dina Meyer) body and realizing that there had to have been someone other than just Amanda in order to be able to carry out the abductions and the tests.  Lt. Daniel Rigg (Lyriq Bent), who led the SWAT raid on Kramer's lair, has become obsessed with the killings and in finding Det. Eric Matthews (Donnie Wahlberg), who is presumed dead.  However, it turns out that Matthews survived and was kept alive for a final test that also involves Hoffman, while Rigg is sent on a timed chase to teach him to overcome his obsession with trying to save everyone.
This time around the FBI becomes involved as well, sending agents Lindsey Perez (Athena Karkanis) and Peter Strahm (Scott Patterson) to look into the Jigsaw killings.  Their suspicions begin to fall on Riggs, as he begins to leave a seeming trail of bodies in his wake.  Strahm also suspects Jill Tuck (Betsy Russell), Kramer's ex-wife, who has previously been interrogated regarding the Jigsaw case.
This is largely considered the point at which the series started going off the rails.  It still has Darren Lynn Bousman directing, but Leigh Whannell is no longer involved in the writing and James Wan at this point is far removed in an executive producer position.  Bousman was largely preparing his own film, Repo: The Genetic Opera, at the time he did this, so the writing fell to Patrick Melton and Marcus Dunston, based on a scenario by Thomas Fenton.  What this largely has in common with the previous two films is Bousman's tendency to overexpose the filmstock to make things look grittier, but typically succeeding in just causing a headache.  However, I do like something he does this time - seamless transitions from one scene to another, largely done in camera by moving the camera over to the other set.
With new writers there is pressure to try to copy the twists and turns of the previous installments, and I think that is where this gets out of hand for most fans.  The first three Saw films all had an internal logic for the plot that was happening on screen as well as a believable connection to what came before, even as new characters and situations were introduced.  This was quite difficult as none of that had been planned.  Here there is somewhat of a plan, but in an attempt to stick with the surprise conclusions of the previous movies there is a tendency for the new writers to overextend.  It is not at the point where the logic is going to collapse in on itself, but it often threatens to do so.
Still, despite most critics and fans not caring for this installment I still enjoyed it.  The acting is solid, the pacing is decent, and so far other than the general tone of the films there isn't much repeated from movie to movie.  Each one has presented a different situation, and in this one it no longer confines the action to a warehouse or home, but instead expands to the world outside.  It also does a good job fleshing out the transition from John Kramer to Jigsaw a bit more.
In the end Saw IV still provides enough story and variety to make it worth watching if one is already invested in the series.  It is nowhere near the low point it is made out to be, even if it seems to be spinning its wheels a bit this time around.  There are the usual twists and turns at the end, and this time it gets a bit inventive as well.
Saw IV (2007)
Time: 93 minutes
Starring: Tobin Bell, Lyriq Bent, Costas Mandylor, Scott Patterson, Betsy Russell, Athena Karkanis
Director: Darren Lynn Bousman