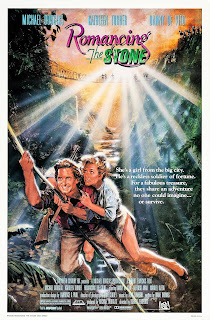 One of the oldest clichés in Hollywood is a writer or actor trying to get their big break by getting the attention of an well-known actor, director or producer that has just happened into their restaurant.  It pretty much works out the same way as submitting any other unsolicited work, which is being informed of the proper channels.  With actors it's usually so someone can enjoy their lunch in peace.  With a script there are other legal complications involved and few people want to get sued later just because they made a movie with a giant green monster and someone that brought them appetizers just happened to have a giant green monster in the script they left behind.
There are, as in all things, exceptions to the rule, and this exception was Diane Thomas.  She presented her script for Romancing the Stone to actor Michael Douglas and he liked it and decided to produce it.  After going through all the usual steps, Robert Zemeckis was hired as a director and 20th Century Fox gave the go-ahead.  After all, by this time there had been two Indiana Jones movies that had been successful.  Even though Romancing the Stone had many elements of a romantic comedy it still had an adventure story to tell, and with Douglas and Kathleen Turner starring it seemed like a can't-miss.
Romance novelist Joan Wilder (Turner) has just finished her latest novel.  Unlike her main character she does not live an adventurous life; in fact, traveling is not even her thing, as she gets sick on about every mode of conveyance.  However, when her sister Elaine (Mary Ellen Trainor) is abducted in Colombia, she is informed by kidnapers Ira (Zack Norman) and Ralph (Danny DeVito) to bring a treasure map down to Cartagena to exchange for her sister.  The map was mailed to Joan by Elaine's deceased husband, and she readily agrees since she has no idea what the map is for.
Then she gets to Colombia she gets on the wrong bus in a situation engineered by Colombian secret intelligence officer Zolo (Manuel Ojeda) in order to get the map for himself.  His plans are foiled with the arrival of Jack Colton (Douglas), who finds his Jeep wrecked and the birds that he has captured to sell gone.  With a long walk to the nearest town ahead he reluctantly agrees to take Wilder with him, but Zolo is hot in pursuit.  Also in pursuit is Ralph, who has been tracking Joan since she got on the wrong bus.  As things progress and Colton and Wilder start to take a liking to each other they decide to see exactly what the map leads to.
Early previews of the movie went so bad that Zemeckis was fired from his next directing job, which was to be Cocoon.  He took advantage of that situation to work with Steven Spielberg on Back to the Future.  Still, it was Romancing the Stone that was his first big hit despite of 20th Century Fox thinking they had a major flop on their hands.  Zemeckis did some reshoots, emphasized the romantic comedy angle, and the results worked out a little better.  The movie was a major hit and, though it got unfairly compared to Raiders of the Lost Ark, there was really no comparison between the two or any attempt to be such.  It did benefit from audiences wanting to see more of that type of film, but that was as far as the comparison went.
The question, then, would be why a movie that was such a big hit at the time is largely forgotten now.  Part of the reason is that Raiders of the Lost Ark was a movie families loved and that brings on fits of nostalgia when it is mentioned.  On the other hand Romancing the Stone was a movie our moms liked.  It is highly entertaining, the dialogue is witty, and I can understand why Douglas jumped on this although he probably had plenty of unsolicited scripts shoved at him.  It is a movie that deserved its success, and Diane Thomas is a screenwriter that would be a household name (and probably a director) if her life hadn't been cut short by a car accident.  She herself was beginning to work on a project with Spielberg, and in the 1980s that pretty much meant she was on her way to bigger and better things.
But, being a movie that our moms liked means that it didn't click with us.  I remembered so little of Romancing the Stone because, until one of the reactors I follow on YouTube recently watched it, I really hadn't thought of it or had any desire to watch it in years.  The movie came out in 1984, I probably saw it once on cable in 1985, and that was it.  It is also so much a product of its time, and Alan Silvestri's score is one of the most '80s things one will ever hear.  There is a song by Eddy Grant called "Romancing the Stone", but don't expect it to appear in the movie.  It was made for the film but ultimately rejected, but when the movie got popular Grant decided this was a way to get a second hit Stateside, and it pretty much worked.  Despite it being a hit the song, like the movie, is long forgotten.
It is a shame that Romancing the Stone isn't more fondly remembered since Douglas and Turner work well together, the romance doesn't interfere with the action and Manuel Ojeda plays a great bad guy.  I do find the ending a bit unbelievable and sappy, the Latin American stereotypes are definitely from another time and Danny DeVito needed to be in it more.  Still, there is so much to like about this movie that it is due another look.
Romancing the Stone (1984)
Time: 106 minutes
Starring: Michael Douglas, Kathleen Turner, Danny DeVito, Manuel Ojeda
Director: Robert Zemeckis