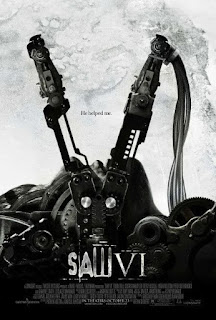 The Saw series has a pretty decent fanbase but is hated by many critics and a lot of horror fans.  Partially it is because it is not necessarily horror, but extremely gory suspense.  I know the term "torture porn" gets thrown around a bit but, since the first, it has already been more about stories with twists - usually being that most of the victims could have escaped unscathed if they had only listened to the instructions of the game.  While the first three typically stuck to this it was inevitable that, as the movies kept making tons of money, series fatigue would creep in at some point.  The cracks showed in the fourth film, while the fifth really did nothing to further the story.
Even the core audience for these films noticed at that point.  Saw V, despite being considered the worst in the series, still earned over 100 million dollars.  Saw VI, on the other hand, which many considered to be a surprising return to form after the fourth and fifth films, made around 68 million.  It was still quite a profit off of the 11 million it took to make it, but it proved to the producers of the franchise that audiences wouldn't just accept anything they gave them.
After Agent Peter Strahm is killed in one of Agent Hoffman's (Costas Mandylor) traps, Hoffman continues to frame him for the recent Jigsaw murders.  Meanwhile, we get background on some of the last days of John Kramer's (Tobin Bell) life when his attempt to get alternative treatment is denied by insurance executive William (Peter Outerbridge).  It turns out that what was in the box Jill (Betsy Russell) received was the final request from her husband to put Will and his associates through a test that would be the final Jigsaw game.
Meanwhile, it turns out that Agent Perez (Athena Karkanis) has recovered from her wounds and is working with Erickson (Mark Rolston) to catch Strahm.  However, it soon becomes clear that Hoffman's attempts at framing the FBI agent are falling apart - and that Jigsaw's final warning to him that he will be tested is coming to fruition.
The major thing I have to say about this sixth installment is that it finally starts to push the story forward once more.  Jill is more involved and, after having to believe through a number of the films that she had no idea what her ex-husband was up to, it becomes clear that even though she didn't agree with his methods she did have some desire to see those that ruined their life get what's coming to them.  Where the fifth movie made the mistake of not concentrating on the game, and making it an after thought to a bunch of other stuff that could have been summed up in about 10 minutes and made a much interesting movie focusing on the latest players, this rectifies that by introducing Will early on and then framing a reason for what happens.  There are some genuinely tense scenes this time around, including a kind of roulette where Will has to look people in the eye when choosing whether they can live or die.
The part with the FBI versus Hoffman is still the weakest.  Erickson and Perez are brought back, but are barely in the movie and don't serve any function other than as a serendipitous distraction so that Jill can can carry out her part of the proceedings.  It doesn't help that Costas Mandylor is looking bored at this point,  He may be getting a paycheck but it feels like he would rather be anywhere else than making this movie.  In contrast, Tobin Bell, Betsy Russell and Peter Outerbridge all seem to be genuinely enjoying it this time around.
As always there are a lot flashbacks with cut scenes from the other movies being integrated with new footage that ties everything together so that the newest installment makes sense.  Shawnee Smith is back again briefly as Amanda to show that Jigsaw's accomplices were not one big happy family, but happily she's not in it for long.  There is a twist as usual but it is a more organic, natural one that doesn't require a lot of explanation combined with suspension of belief.
All said, Saw VI is the first undisputedly good Saw film since Saw III.  I would not have been upset if they had ended the series back with that one, and definitely think that this one should have had an ending that just finalized everything and didn't drag it out any longer.  Although the producers of this series keep trying to find ways to milk it even now I don't think anyone would have been upset if this had been the finale, but unfortunately as this was being made there were plans to divide the true finale into two more movies.  Luckily, the diminishing box office returns for this one convinced the powers that be to cut it down to one, but this is still the last one of the series that is truly necessary.
Saw VI (2009)
Time: 90 minutes
Starring: Costas Mandylor, Tobin Bell, Betsy Russell, Peter Outerbridge
Director: Kevin Greutert