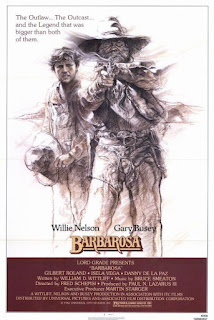 Westerns have had occasional small revivals over the years, even if they have not stuck.  One of those came in the mid 1980s, while another popped up in the early 1990s.  The early 1980s, though, was not a time for these films, as Michael Cimino's Heaven's Gate had practically brought down United Artists and the poor treatment of horses on the set brought to light realities of animal cruelty that were inherent to many of these films.
Regardless William D. Witliff, along with Gary Busey as a silent producer, decided to do a western based on the legends he had heard about outlaws and bandits when he was a kit growing up in a remote part of Texas.  In order to do this he hired Australian director Fred Schepisi and headed off to Big Bend State Park, one of the most remote parts of Texas he could find, and made a movie about an honorable thief named Barbarosa, played by Witliff's friend, country singer Willie Nelson.
Barbarosa got great reviews from the critics and continues to even close to 40 years later.  However, it was a major flop, largely due to the company that made it going under and no effort at all made to promote the movie.  Still, like a lot of movies that quickly disappeared at the box office in the 1980s, it became a hit once it began running on HBO.  It was the most requested movie at the time and, all these years later, still remains one of the best unknown westerns.
Carl (Busey) is a farm boy that accidentally kills his brother-in-law.  He heads off toward Mexico, pursued by the two remaining sons of Herman Pahmeyer (George Voskovec).  On his way he meets Barbarosa, who originally intends to rob him until he realizes that Carl has nothing to steal.  He takes pity on the boy, showing him how to catch an armadillo for supper, before taking off again on his own.  They once more cross paths in a small village when the Pahmeyer boys catch up with Carl, with Barbarosa arriving to rob everyone just in the nick of time.
The bandit himself is being pursued by Eduardo (Danny De La Paz), the latest in a series of sons and grandsons and relations of Don Braulio (Gilbert Roland), the head of the Zavala clan.  He has declared a blood feud against Barbarosa, who is married to Braulio's daughter Josefina (Isela Vega), declaring that it is every Zavala's duty to try to kill the outlaw.  Eventually Carl and Barbarosa team up, with Carl becoming part of the legend, and the farm boy himself learns a bit more about surviving and standing up for himself along the way.
Surprisingly Willie Nelson is a good actor.  Most singers, such as Elvis Presley, Johnny Cash and Roy Orbison, got their movie roles either to cash in on their fame as musicians or to help revive sagging careers.  It is true that Nelson is not given any big, dramatic speeches or the like, but it is nice that he isn't.  It would ruin the character of Barbarosa if he did.  Schepisi just lets Nelson act normally without trying to force him to be something he isn't, and it works.  As for Gary Busey, it is important to remember this is six years before the motorcycle accident, which means we get the Gary Busey that was nominated for an Oscar for The Buddy Holly Story, and not the Gary Busey known more for his erratic behavior than acting ability.  His transition from naïve farm boy to a man who can stand proudly on his own and face the world is performed masterfully.
Barbarosa is also notable for the cinematography of Ian Baker, who used the lighting and the natural beauty of the Big Bend Park to its full potential.  In many ways the sweeping vistas, as well as the non-conventional western setting, recalls the Spaghetti Westerns of the past, but it is still a movie that stands on its own.  The only main problem is that there seems to have been a version that made the ending make a little more sense, but it seems to have been lost.  I pretty much suspected that Don Braulio's reasons for the feud had less to do with honor and more to do with keeping a legend alive, and there are scenes between him and Eduardo that were supposed to make this more clear.  It's an aspect of the story much more in line with the other themes about coming to age and how myths and legends are born - as well as the futility of revenge.
Just like in the 1980s the movie is still sitting happily at HBO waiting for people to discover it.  It's not that long, and it is truly worth it to catch one of the better westerns to be made in the later half of the 20th century.
Barbarosa (1982)
Time: 90 minutes
Starring: Willie Nelson, Gary Busey, Gilbert Roland
Director: Fred Schepisi