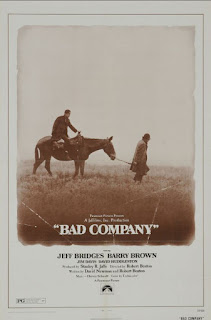 The late 1960s and early 1970s saw many movie genres getting reimagined.  This was do in large part to Hollywood itself being reimagined.  The 1970s are not considered a great era in cinema because of Hollywood's involvement, but largely because they were forced to pull back from controlling every aspect and allow writers and directors (often the same person) to have free range over what types of movies they made and how they made them.  For awhile it made sense to let others spend the money and then buy it from them and see if a profit was made.
Thus even studio funded films in the first half of the '70s seemed to always be a bit different.  Westerns were no exception, although the genre had largely begun to fade by that time.  One of the notable entries in the genre that did not feature Clint Eastwood or an aging John Wayne was Robert Benton's Bad Company, which he directed and cowrote with David Newman.  It was one of the first westerns to try to avoid all the usual tropes as well as remove any romantic notions about the Old West.
Drew Dixon (Barry Brown) is hidden by his family when the U.S. Army comes looking for young men that didn't respond to their draft notices and sends him west from Ohio to Missouri with a decent amount of money and instructions to join a wagon train.  His eventual destination is Virginia City, Nevada, but he gets detoured in Missouri when, hiding from some curious Union soldiers, he is robbed by Jake Rumsey (Jeff Bridges).  Rumsey is a wannabe outlaw leading a small group of other draft dodgers and an orphan kid who are all planning to head west on their own.
Drew decides to join them and, while things aren't too trying at the beginning, it becomes apparent that none of the boys have any skills for living off the land.  Also, they soon fall prey to a real band of outlaws led by Big Joe Simms (David Huddleston).  In desperation they try, and fail, to trust in the goodwill of other settlers, and eventually turn to other means of living.
The thing I admire most about Bad Company is that it tries to be as realistic as it can. The dress is authentic, as is the fact that none of our outlaws (even the so-called professionals) can hit the broadside of a barn and it is shown that a lot of time the people going west really know nothing about farming or any other skills they need to live in a place where civilization may be hundreds of miles away.  Drew Dixon is the only one who eventually does and it is purely out of frustration and the need to survive - a need kept alive by his anger and hatred of Rumsey.  Rather than hunting Big Joe's men are shown living off what they are able to steal from other people.
Despite the realism and the fact that there are some sometimes shocking and other times comedic things that I like about the movie, as a whole it doesn't stand up.  Just because the characters seem to be going nowhere doesn't mean that the movie should as well, and for the most part Bad Company doesn't progress much.  Even as a character study of the band that sets out it doesn't work as the only two that are three-dimensional characters are Dixon and Rumsey.  While Barry Brown and Jeff Bridges both acquit themselves well in their roles it seems that the whole point affair becomes muddled for a fair amount of the movie, and suddenly it's over just as a real story begins to develop.
This was Robert Benton's first feature film and it is much different that later movies he would write and direct.  I don't fault him on style or technique, and I understand that he is trying to make certain political points not only about the Old West but about the United States in the early 1970s.  This is considered by many to be one of the better revisionist westerns but, unfortunately, its episodic style and failure to tell a coherent story ultimately do it in.  In some ways it feels more like a big budget student film rathe than a major motion picture.
Bad Company (1972)
Time: 93 minutes
Starring: Jeff Bridges, Barry Brown, David Huddleston
Director: Robert Benton